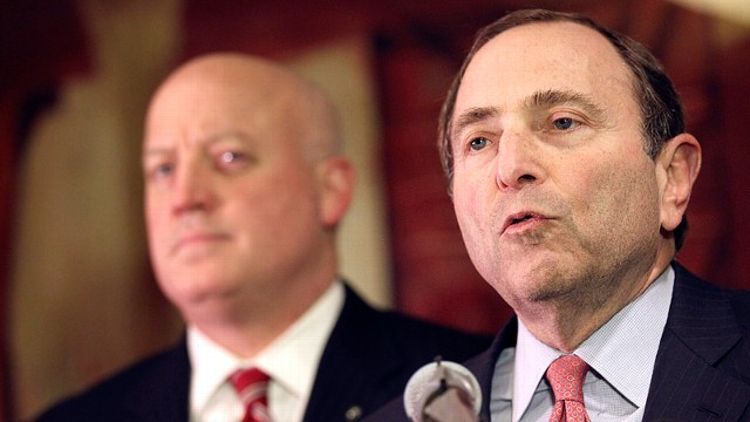 At the MIT Sloan Sports Analytics Conference this past winter, Toronto Maple Leafs general manager Brian Burke was asked to identify the best negotiator he’d worked with throughout his career.

Burke, who was onstage as part of a panel called “The Art and Analytics of Negotiation,” gave an example of the NHL commissioner’s inner Bobby Fischer.

Last night Bettman once again delivered a speed-talking monologue on collective bargaining that left people bewildered, though this time it wasn’t behind closed doors. Capping off an exhausting few days that contained all the emotional highs and lows of, say, a good hockey game, the NHL commissioner stood inside the Westin Times Square and addressed the assembled media.

Most of them were buzzing before he even spoke. Just 30 minutes earlier, NHLPA head Don Fehr had delivered a rather sunny assessment of the state of negotiations — “We think there is a complete agreement on dollars,” he said. “There shouldn’t be much reason why we can’t get an agreement in the near term” — only to abruptly return and announce, “There has been a development. It’s not positive.” The league’s side, he said, had just left a voice mail on his brother Steve’s phone rejecting the players’ most recent proposal. What’s more, they had informed them that certain elements of the owners’ offer were now off the table.

So when Bettman finally took the mic, he appeared uncharacteristically rattled. No longer abiding by his stated policy of “not negotiating in public,” the NHL commissioner gave a blow-by-blow of (to hear him tell it) the massive compromises that had been made by the owners that had been unappreciated by the players. The league had gone as far as it possibly could go, he said, and then it had stretched just a little bit more in the spirit of getting something done.

And thus the hearts of hockey fans everywhere sank.

As Bettman spoke, a few NHL players gathered stone-faced in the back of the room, prompting many to wonder whether they were there to intimidate or to cause a disruption. The answer was far more benign: The TVs in their hotel rooms at the Westin Times Square didn’t get TSN, and no American stations were broadcasting Bettman’s words. (Hey, at least the Taiwanese news agencies care!)

For all the sound and fury, it seems clear the question of who will come out ahead in this deal has been settled: Almost all of the meaningful movement to this point has come from the players’ side. They agreed to a 50-50 revenue split, down from the 57 percent they have been receiving. They budged on contract term limits and the length of the CBA (though not far enough to satisfy the NHL; those issues are two of the remaining sticking points). They submitted, implicitly, to the idea that teams may not wind up paying in full all the contracts that their front offices offered and inked — some of them just weeks before the expiration of the last CBA.

By comparison, the NHL hasn’t yielded much of anything. Some of the items on which the league considers itself to have compromised — arbitration rights and the parameters surrounding free agency, for example — are merely remaining unchanged from the last (already owner-friendly) CBA. Others aren’t exactly generous: One of the league’s biggest concessions to date has been its willingness to create a “make whole” fund that would help ease the transition down to a 50-50 revenue split from 57-43 — meaning the NHL has grudgingly agreed to pay some, though likely not all, of the salaries it contractually owes.

So when considering this whole unholy mess, it’s worth remembering that when the NHL talks about how far it has moved toward the middle in these labor discussions, it’s not really in terms relative to the status quo, but rather in comparison to the lowball-y offer the league opened negotiations with back in July. Bettman himself admitted as much in a surprisingly frank comment to the Winnipeg Free Press‘s Gary Lawless back on November 19:

Free Press: Was the aggressive nature of your first offer to the players a mistake?
GB: I think the view some have of our first offer is fairly naive as it relates to collective bargaining. A sophisticated negotiator would have looked at it and said, ‘Obviously they want a 50-50 split.’ If we’re at 57 and they propose 43, they must be telegraphing where they want to end. If your intention was to use it in an inflammatory way, you could do that. If your intention was to make a deal, you could pretty much chart out what the course should be.

His candor made me think of something else Burke had said during the Art and Analytics of Negotiation panel at the SSAC: “My theory is, make the first meeting as short and unpleasant as possible,” he said. “Sometimes it’s better to just punch the guy in the face.”

Burke was hamming it up a bit for the audience then, but it’s a good reminder of how much of this lockout is scripted. It’s easy to read everything into a rejected offer or delivered ultimatum, but sometimes all it means is that a negotiation is going on. We’re dealing with people who are trained to think three moves ahead.

Which is why it’s alarming when you start to see emotion creep into the boardroom, especially from executives who ought to know better. “The owners were beside themselves,” Bettman said yesterday, explaining that their offer of an additional $89 million in “make whole” money to the players was not received gratefully enough. “Some of them I had never seen that emotional.” Bill Daly characterized the response as “quite frankly … insulting” and added that “They wanted to leave the room; the players asked them to stay.”

Aren’t these guys supposed to be savvy businessmen? You think they acted this way, say, when they were in talks to purchase their teams? It’s almost as if some Frank Luntz focus group determined that the owners were coming across too facelessly, and a rusty dial marked “emo” was cranked up. Or maybe it’s just gotten personal.

During the Art and Analytics of Negotiation panel, Alec Scheiner, the general counsel for the Dallas Cowboys, talked about how losing your cool can lead negotiations right off the rails. “In complicated transactions, emotions will at some point get hot, and someone will say, ‘Here’s my dealbreaker, this is my walk-away point.’ And I find that it usually isn’t.” Gary Gertzog, one of the NFL’s lawyers, agreed: “We’ve seen situations where ultimatums have been issued, then it’s, no, that’s not really the deadline,” he said. “Then you’re not going to believe it the next time they tell you that it’s truly a deadline.”

The question that no one knows the answer to yet is what the league’s true walk-away point or its true deadline is. Bettman called it “incomprehensible” that Fehr would try to paint a rosy picture of the state of affairs knowing full well that the players hadn’t acquiesced to the league’s three remaining untouchables: a CBA that lasts 10 seasons, no compliance buyouts or caps on player escrows, and a five-year cap on contract length (seven if you’re re-signing your own player) limited to a 5 percent yearly variance. That last one, Daly vowed, is “the hill we will die on.”

But if the NHLPA is guilty of trying, a bit disingenuously, to make the league look like the bad guys by overemphasizing just how close everyone is, the NHL has damaged its credibility too: by saying time and again that they are making a final, take-it-or-leave-it, we-can’t-do-better-than-this offer — and then, weeks later, doing better than that.

If the league is serious this time about taking the “make whole” allowance off the table, then the players will likely counter with a push for decertification. (Here’s a great primer on just what that nuclear option could mean.) And while at least one of the league’s “depth” players anonymously questioned his union leader yesterday, the NHLPA appears to remain mostly united behind Fehr. As Jonathan Willis pointed out, by this point in the 2004 lockout many players had gone public with their doubts about former boss Bob Goodenow; as Bruce Arthur said, if in fact Fehr is advising the union to do something that he thinks will yield them more in the end, then he’s “basically doing the job the players hired him to do.” But the worry is that Fehr may be underestimating the owners’ resolve — and, I guess, their feelings.

As Burke warned during the Sloan conference, “If you drive too hard a bargain, at some point it’s gonna bite you right in the ass.”

Burke wasn’t the only one on the panel to be asked that day about the best negotiator he’s ever seen. Joel Linzner, a bigwig at Electronic Arts, got the question too; he said that the most skilled people he’s worked with have been mediators.

“I marveled sometimes at the way the mediator could actually take two warring parties — that’s two people that [didn’t have] any intention of actually doing business together, or even necessarily wanting to — to actually agree on a structure,” he said. The NHL tried bringing in federal mediators last week — only to be told that the situation had grown too toxic to be mediated.

Still, it may help to take a bird’s-eye view of what happened this week. The two sides inched ever closer to an agreement, with just a few small-seeming sticking points remaining between them. The league made a proposal. The players countered. The league pulled away mad. This is something that has happened numerous times since the summer, and every time talks have resumed and progressed. Bettman would not name any sort of “drop-dead date,” though he did say that he wouldn’t be interested in a season any shorter than 48 games, as in 1994-95. That comes out to a de facto deadline of somewhere around the New Year.

“You need to keep emotion out of it as much as possible,” Scheiner said during the panel this winter. “There are times in any complicated negotiation where you’ll be upset with the other party. You have to put that to the side and realize you’re there to get the deal done. It’s a good deal, and you’re there to get it done.”

And that’s the biggest problem between the NHL and the NHLPA right now: Both sides are starting to wonder aloud whether what they’re fighting so hard for is even a good deal at all. But if they want to get anything done, they’ll have to start believing that somehow, it will be.