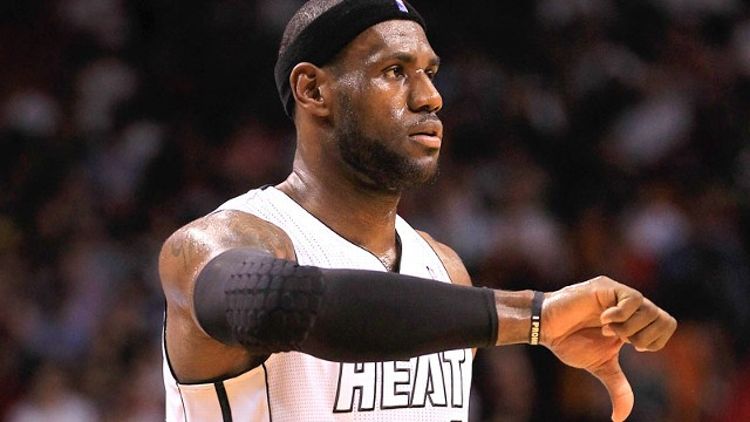 About three weeks ago, I noted how Miami opponents were blistering-hot from 3-point range, and how rare it has been over the last decade-plus for a team that allows both a lot of 3-point attempts and a high percentage of makes on those attempts to advance far in the playoffs. Miami last season pulled off the trick, in part because they tightened up their 3-point defense considerably in the playoffs. In other words, the message three weeks ago was, Chill. They’ve done this before, and they’re the champs.

Three weeks later, Miami opponents are still averaging a league-high 25.5 triple tries per game, even though Miami’s pace of play is right around the league average. The shooting percentage on those 3s has dropped from 40-plus percent three weeks ago to 35.8 percent now — about league-average. Still: The combination of a decent opponent 3-point percentage and a ton of attempts has generally been a very bad indicator of postseason longevity. But we went through this last season with Miami, and veteran-laden champs earn some “flip the switch” leeway.

But here’s the difference: Even as Miami allowed a ton of 3s during the 2011-12 regular season, their overall defense was healthy; Miami at the quarter mark of last season ranked eighth in points allowed per possession, per Tom Haberstroh’s parsing of NBA.com’s stats database this morning. (Thanks, Tom!) Miami is 23rd after New York walloped them last night, and they’ve been below-average all season. Last year’s Miami defense was healthy overall despite a ton of 3s. This year’s Miami D is unhealthy for reasons that go beyond some hot opponent shooting and shoddy Miami perimeter defense.

Before getting to the fun stuff — video and X’s-and-O’s — we have to address two trends in the numbers that differentiate this year’s Heat from last year’s:

• They are not forcing turnovers. Miami has forced opponents to cough it up on 14.9 percent of possessions, the eighth-lowest mark in the league, though one that is less than a single percentage point from the league average. Last season, Miami ranked third overall in this category, with an opponent turnover rate of 17.6 percent. The difference amounts to only one or two turnovers per game, but against the very best teams, changes on the margins matter; turnovers fuel Miami’s devastating transition game, and a lack of turnovers is a sign that Miami is not pressuring ball handlers with the same fervor of last season.

Take this James White (!) 3 in the first half last night:

The breakdown starts at the top, where Pablo Prigioni on the pick-and-roll shows no concern at all with the Norris Cole/Udonis Haslem duo trying to contain him. Cole, a touch-and-go defender, takes a foolish leap at a Prigioni hesitation dribble — a pause that also convinces Haslem it’s safe to return to Rasheed Wallace up high. (It would have been, had Cole not jumped himself out of position.) Prigioni’s penetration forces a series of help rotations, with Ray Allen starting things off by sliding off Jason Kidd on the left wing. The Knicks drive and kick from there, and Allen is way late in realizing it’s his job amid the scrambling to account for White in the corner as White’s man (Mike Miller) slides up to take Prigioni.

This is actually a nice microcosm of Miami’s defensive issues — ball pressure that doesn’t meet their standards, a jumpy mistake from a Miami point guard, and Allen looking uncertain and slow in his adjustment to Miami’s scheme. Miami is allowing a very solid 99.5 points per 100 possessions when Allen sits and a horrid 107.4 when he plays, per NBA.com. It’s not fair to put all of that on Allen, of course, but he has struggled so far in adapting to Miami’s frantic style. It’s early. But here’s Allen again looking lost in his rotations on another White 3:

Miami just isn’t intimidating opponents up high as they did last season. Watch Raymond Felton comfortably pass over the top of Miami’s defense to set up an easy Tyson Chandler dunk, with Miller a half-step late rotating:

And here, Felton just blows by a wrong-footed Dwyane Wade by going against a Chandler screen for an easy and-1:

Interestingly, the help rotation on this play comes from LeBron James at the left elbow, and not from Mario Chalmers in the left corner — the place from which most defenses, including Miami’s for most of the past three seasons, would send help on a play like this.

The same thing happened on this embarrassingly easy Prigioni drive. Watch up top as Chalmers jukes himself out of position with a half-step the wrong way, and then at the bottom, as Wade stands still in the left corner instead of darting in to help:

This is disturbing stuff. As I’ve written before, Miami plays an ultra-aggressive style of defense designed to protect the paint and rim at all costs. It is their way of making up for a lack of size and shot-blocking. They trap ball handlers far from the hoop to shut off penetration before it starts, and their help defenders are generally in the paint early to bump big men rolling to the hoop and swarm whatever drives get through. Playing that way will naturally yield some open 3s to teams that swing the ball around quickly and with precision, ahead of Miami’s rotations. Jason Kidd’s ability to make creative and unpredictable swing passes against those rotations was a crucial factor for the Mavericks in the 2011 Finals.

An engaged Miami team wins the overall gamble by limiting the number of wide-open 3s for the best opposing shooters and shutting off the rim. They are doing neither so far this season, and that’s the second trend that jumps out in the numbers:

• Opponents are getting a better selection of shots, and making them more often.

The Heat this season are allowing more shots at the rim and more corner 3s, while inducing fewer low-value mid-range shots, according to NBA.com. About 32.5 percent of opponent field goal attempts came in the restricted area last season, and only 55.5 percent went in — the second-lowest mark in the league, a crowning achievement for a team without a true center.

This season, 34 percent of enemy shots are coming in the restricted area, and 59 percent have gone in — a hair above the league-average percentage so far.

These aren’t massive changes on their own, but they add up to a couple of points per game, and those small changes matter against top competition.

That’s especially so when combined with this: Miami is allowing 7.7 corner-3 attempts per game, the second-highest mark in the league, and a massive jump from the 5.0 they allowed last season, per NBA.com. They’ve also allowed more non-corner 3s, though those are less damaging, and opponents are generally finding a way out of the mid-range shots Miami wants to force. About 42.2 percent of opponent shot attempts last season came from the dead zone between the restricted area and the 3-point arc; that share is down to 35.5 percent this season.

We’re no longer talking about changes on the margins. These are systematic problems that go beyond random chance, and beyond Erik Spoelstra’s decision on Thursday night to experiment with more switching than usual on pick-and-rolls — a decision that backfired on a bunch of Felton blow-bys of Chris Bosh, which in turn resulted in open 3s and offensive rebounds for the Knicks. (As an aside, the discussion surrounding the merits of switching, both on and off the ball, is one of the more interesting ones going on in NBA circles right now. The mismatches a switch can produce just look so terrible, and they do lead to some concrete consequences. But some thinkers around the league — from GMs to coaches to stat geeks — are convinced teams aren’t switching enough. That’s a story for another day.)

Some of this is just flat-out bad defense — missed rotations, confusion, bad footwork, laziness in transition (hi, Dwyane!), etc. I mean, take a look at the breakdown that led to this open Novak 3:

It’s hard to see because of the camera angle, but the play begins on the right side, with Felton setting a screen for J.R. Smith as Chandler holds the ball at the right elbow. Both defenders involved in the screen (LeBron and Allen) chase Felton up toward mid-court, leaving Smith free at the rim, and drawing the help that gives Novak a high-value corner look.

That is amateurish stuff, and it’s easy to dismiss such blatantly bad defense as the product of an uninterested champion going through the slog of the regular season. There is truth in that. Teams have “flipped the switch” before, and the Heat players talked after the game about motivation issues in the wake of breaking through for a championship last season. Shane Battier played a little last night, but his injury has removed a crucial cog — a plus defender who can guard power forwards and allows Miami to play its preferred small-ball almost full-time.

1. This kind of shoddy defense infected Miami in the playoffs last season, too. It defined the first five games of the conference finals against Boston, when a bad Celtics offense that couldn’t score against either Atlanta or Philadelphia in prior rounds suddenly started lighting up Miami at a top-10 scoring rate. That series, especially Games 3-5, featured a shocking level of sloppiness from Miami — miscommunications similar to the one in the Novak 3 above, inexcusable transition non-efforts (some of which featured players whining to the referees instead of retreating on defense) and the collapse of Miami’s pick-and-roll defense against Rajon Rondo for much of Game 5.

We know what happened after Game 5. LeBron went bananas, and Miami’s defense shut the door on Boston and Oklahoma City, the latter one of the league’s top-three offenses. But that Boston series stands as a reminder that bad regular-season habits have popped up at high-stakes moments.

2. With a bottom-10 defensive ranking, Miami is flirting with very dicey territory. Only 27 teams over the past 33 seasons have made the conference finals after finishing outside the top 10 in points allowed per possession, per Basketball-Reference.com. That’s about one team per season. Precisely four of those teams ranked 20th or worse in that category — the 2009-10 Suns, 1998-99 Pacers, and both the Bucks and Lakers in 2000-01. Not surprisingly, all four ranked either no. 1 or no. 2 in scoring efficiency, and Miami has been fine on that end. But only one of those teams — the 2000-01 Lakers — made the Finals. That team stands as perhaps the greatest “flip the switch” team in NBA history. They played “blah” ball through their first regular-season title defense, with both Kobe Bryant and Shaquille O’Neal missing short stints due to injury issues, including Shaq’s infamous toe problems. Then the playoffs started, and the Lakers’ sieve morphed into a defensive killing machine. They allowed just 97.9 points per 100 possessions, by far the stingiest mark of all playoff teams, and went 15-1 in cruising to a dominant title.

Is that Miami’s road map here? Maybe. But it’s fair to worry now. Wade’s play has been up-and-down all season, and his knee could act up at any time. Another injury to Battier would have a bad trickle-down effect on Miami’s rotation and style, and result in the overtaxing of James. There are some key new parts struggling to pick things up, and some of the holdovers are aging.

Maybe the real Heat are just waiting to reveal themselves. But the indicators are bad.