NFL Week 4 Winners and Losers: Put Your Goggles On for Teddy, Luck, and THE BUCS 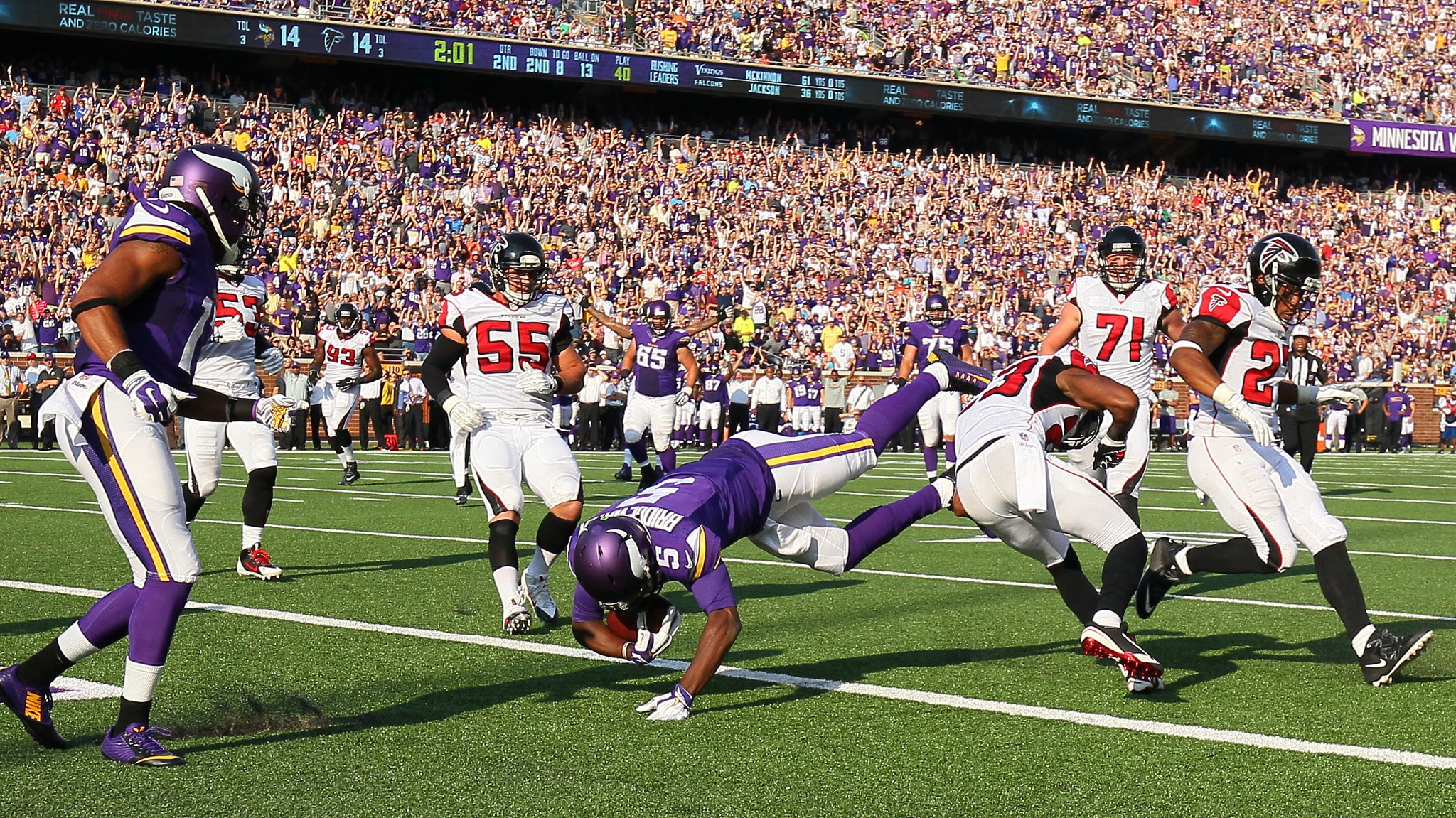 Norv Turner had a lot to do with Bridgewater’s big day. Turner dialed up some short screens to Jarius Wright early on, getting his quarterback some easy completions. Even as the game went on, a lot of Bridgewater’s damage was done off quick play-action throws that seemed to be his initial read.

What I wasn’t ready for was the mobility. Not only did Bridgewater run one in himself, he also picked up plenty of cheap yards on short scrambles while getting away from pressure. That included a nifty spin move for five yards on a crucial third down, which kept Minnesota’s final touchdown drive moving. It’ll be interesting to see what Bridgewater can do against a defense Minnesota can’t gash on the ground, but if that ankle injury isn’t too serious, this should be a good time. 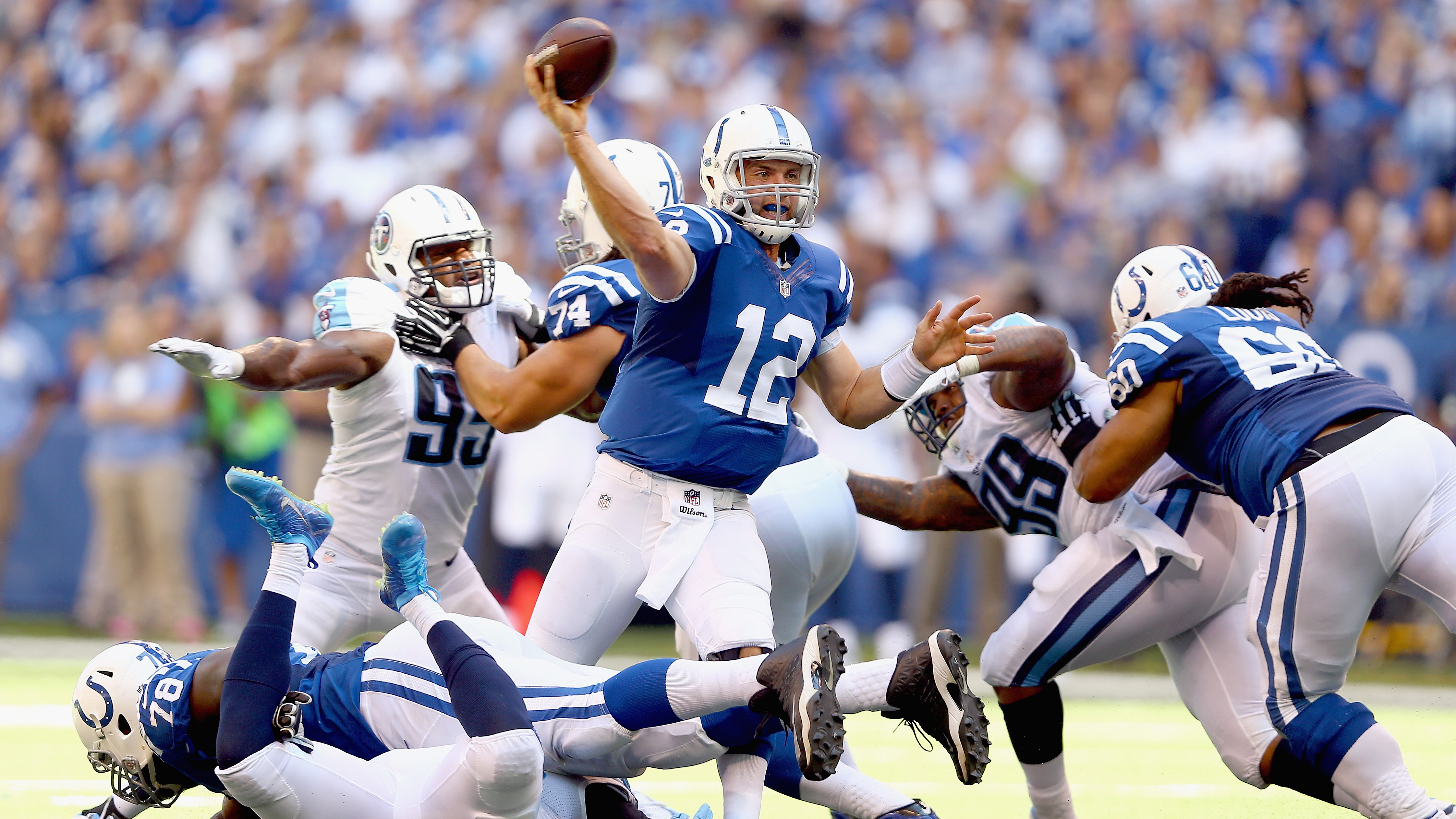 OK, Andrew Luck — you have my attention. We expected him to shred the Jaguars last week. But the Titans actually field a respectable pass defense, ranked fourth in that category’s DVOA through three games. And Luck still looked like he was playing against Cal: 29-of-41 for 393 yards and four touchdowns.

Luck has been great in spurts during his first two seasons, but the Colts’ passing game had yet to be consistently devastating. It looks like that might be changing. Luck has achieved at least 370 yards in three of Indy’s four games, and although that’s come on a ton of volume, resulting from some early holes, it shows that the Colts can move the ball that way if they choose to. They should choose to, by the way. Someone should be reminding Pep Hamilton of that at all times.

I hope everyone brought their goggles.

If we’re being honest, this week’s slate of games was a little underwhelming. But there was still a little hop in my step when I got out of bed yesterday. No matter what, Steve Smith playing the Panthers was going to be fascinating. And it just happened to be exactly the kind of fascinating Smith had promised us.

Steve Smith "35 yrs old and I ran around those boys like they were schoolyard kids." #Panthers

Anyone who’s ever watched Steve Smith shouldn’t be surprised he finished this game with 139 yards and two touchdowns. He has a great bounce to thank for his first, but there was no luck involved on the second. It’s never made any sense that a 5-foot-10 receiver could be a touchdown machine, but Smith has spent a decade hauling in scores. His second touchdown, a sliding grab in the back of the end zone, was the perfect way to twist the knife — a reprisal of the type of play he made over and over in Carolina.

The real problem for the Panthers is that it wasn’t just Smith torching them yesterday. Torrey Smith had a long touchdown catch of his own. Justin Forsett did what he wanted on the ground. Joe Flacco looked like 2013 Playoffs Joe Flacco. For the second consecutive week, an offense not known for piling up points did so with ease against Carolina. In all fairness to the Panthers, though, I’m not sure Steve Smith was ever losing yesterday. 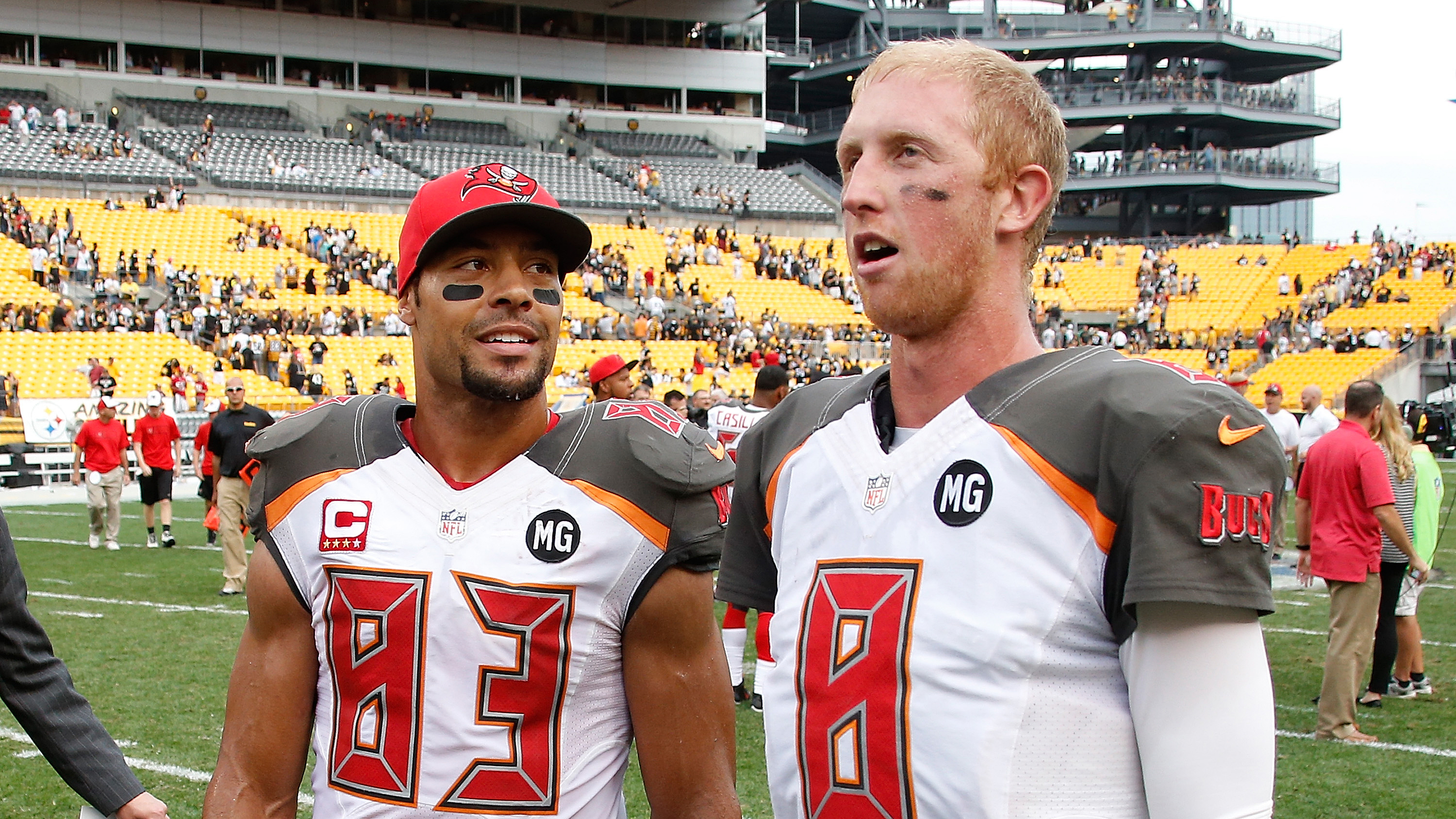 Pittsburgh controlled this game, for the most part, but credit must go to Tampa Bay for keeping it close. The Steelers did nothing on the ground in the second half — 11 carries for 9 yards — and it meant they couldn’t bleed the clock dry. Glennon and the Bucs offense eventually finished it off, but having Gerald McCoy and Michael Johnson back went a long way toward the Bucs stealing the game. Pittsburgh had run all over teams in its first three games, and Tampa Bay just wasn’t having that down the stretch.

The Bucs still have a lot of issues. Ben Roethlisberger largely had his way — and his line would have been even gaudier without the four or five drops — but Tampa Bay still did enough to win. Coming off a game like the one against the Falcons, that’s more than anyone could ask for.

Joe Philbin might want to hold off on sending Ryan Tannehill to the bench. Sure, it’s the Raiders, but Tannehill was nearly perfect in the first half of the Dolphins’ rout: 17-of-19 for 204 yards.

Tannehill is somewhere between the quarterback he was against Oakland and the one he was against the Chiefs a week ago, but if Sunday proved anything, it’s that sending him to the bench after three games would have been crazy.

J.J. Watt now has two more touchdowns this year than Andre Johnson. He is not real.

I understand that the rules against dark visors are safety-related,1 but dark visors really are the best. Steve Smith was wearing one yesterday and looked even more menacing than he would otherwise. Martellus Bennett looked like a cornerback-crushing cyborg in his. Dez Bryant is ditching his because he was tired of getting fined by the league. That’s a loss for all of us. 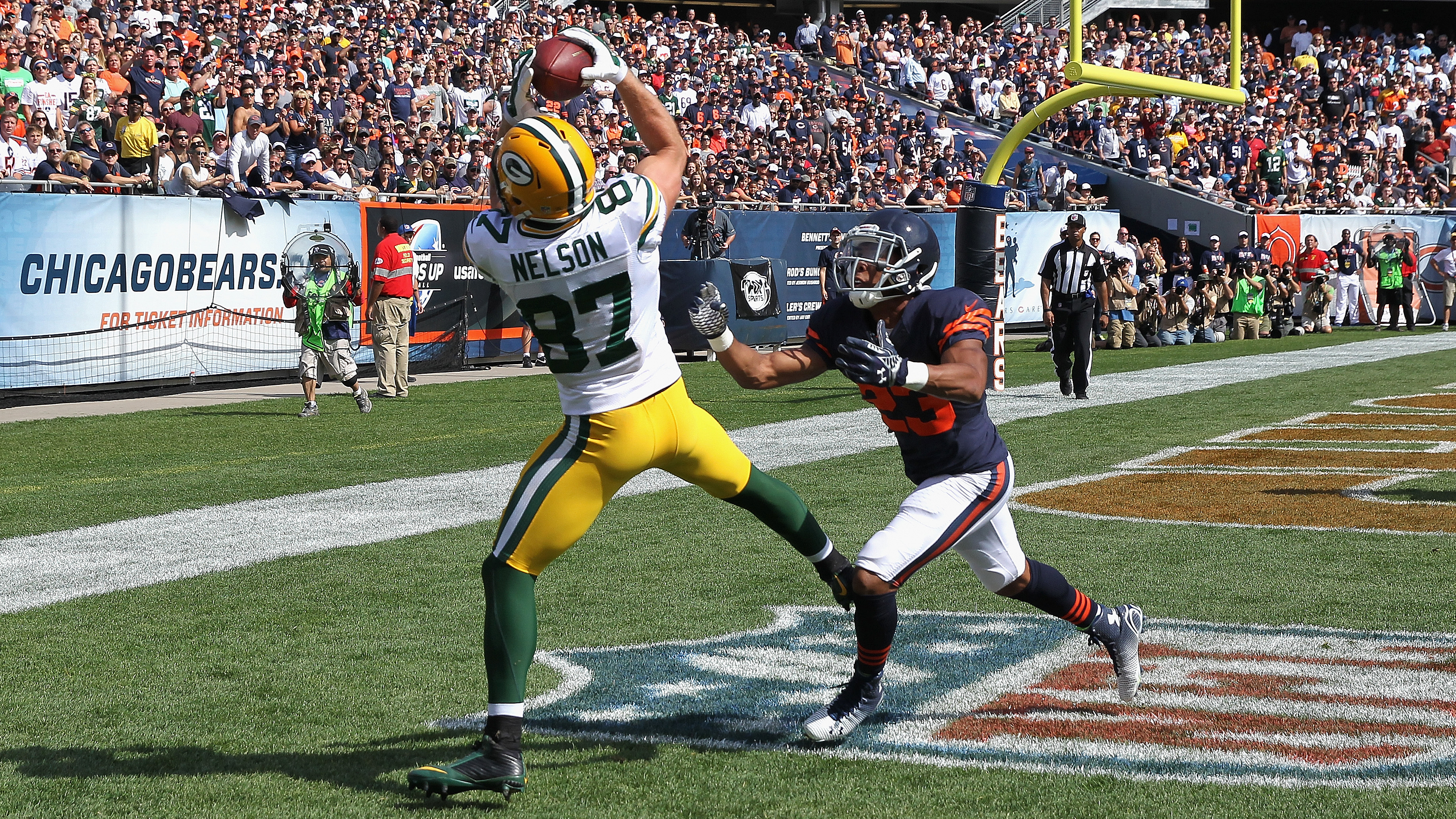 When Aaron Rodgers was covering Frankie Goes to Hollywood on Wisconsin radio this week, I’m guessing it was because he’d already watched some tape on this Bears defense.

Numbers cannot explain how easy of a time Rodgers had tearing up the Bears secondary, but let’s try anyway. Rodgers averaged 10.8 yards per attempt, completed 22 of his 28 passes, and threw a touchdown every seven throws. Green Bay scored 21 points in the first half, while having the ball for less than nine minutes. I’m pretty sure Rodgers went the whole game without a Bear putting a finger on him inside the pocket. With that kind of time, his receivers, the whole “being Aaron Rodgers” thing — it was all enough to absolutely destroy the soft zone coverages Chicago seems to love.

Chicago’s biggest problem a year ago was its run defense, which comfortably finished 32nd in DVOA. The Bears didn’t turn into the Jets or the Cardinals over the summer, but this season, they have been much better at stopping the run. The problem is, their pass rush is now sputtering, and against a team like Green Bay, the Bears are going to have a long day. None of this was helped by missing Jared Allen. The first few weeks may have been an aberration for the Packers offense, but there might be a better chance that Chicago’s defense is in real trouble.

It took Philadelphia about 54 minutes of game time yesterday to run its first play in San Francisco territory. That’s a truly horrifying stat, and it doesn’t even do justice to the futility of the Eagles offense on Sunday.

We’ve officially reached the point at which it’s time to worry about the Birds’ running game. It was inevitable that Philly would struggle to run the ball with Evan Mathis and Jason Kelce hurt, but for the second consecutive week, the ground game was a disaster. LeSean McCoy averaged 1.7 yards on his 10 carries yesterday, and it would have been a lot worse had he not turned a few 5-yard losses into 1-yard gains.

When Jason Peters limped off the field for a couple of plays yesterday, it meant that every spot along the Eagles offensive line was being manned by someone different from last season. Peters came back into the game, and last year’s first-round pick, Lane Johnson, will be back at right tackle next week, now that his suspension is over. But it will be weeks before Mathis and Kelce return, and until they do, the Eagles are going to have a tough go on the ground. All of this comes a season removed from having by far the best rushing offense in football.

Philly’s been having a hard time running the ball all season. But against the Niners, the Eagles’ passing game wasn’t able to make up for it like it had been in earlier games. Nick Foles averaged a depressing 4.5 yards per attempt, and even that figure is buoyed by the chunks of yardage the Eagles picked up on their second-to-last drive. For the most part, Philly did absolutely nothing against a San Francisco secondary that has its own issues.

A lot of Foles’s success last year came off easy play-action throws made available by that dangerous running game. Those plays become less effective when McCoy is getting the ball 10 times a game because the benefit of running the ball has all but disappeared.

It was a rough afternoon for Doug Legursky. The Chargers are down to their third-string center, after losing stalwart Nick Hardwick and backup Rich Ohrnberger. It showed.

Over the course of the game, Legursky fumbled two snaps, caused a false start when he failed to snap the ball, and, my personal favorite, picked up the ball and tried to put it back down without anyone noticing.

San Diego rolled over the Jaguars, so none of it really mattered, but it’s something to keep an eye on going forward. The Chargers’ inability to run the ball against Buffalo last week is understandable, considering what the Bills have done to other teams on the ground (Houston’s running backs had 15 yards on 17 carries yesterday — seriously), but managing only 2.1 yards per carry against Jacksonville is concerning. That’s not all on Legursky, but he isn’t helping, either. 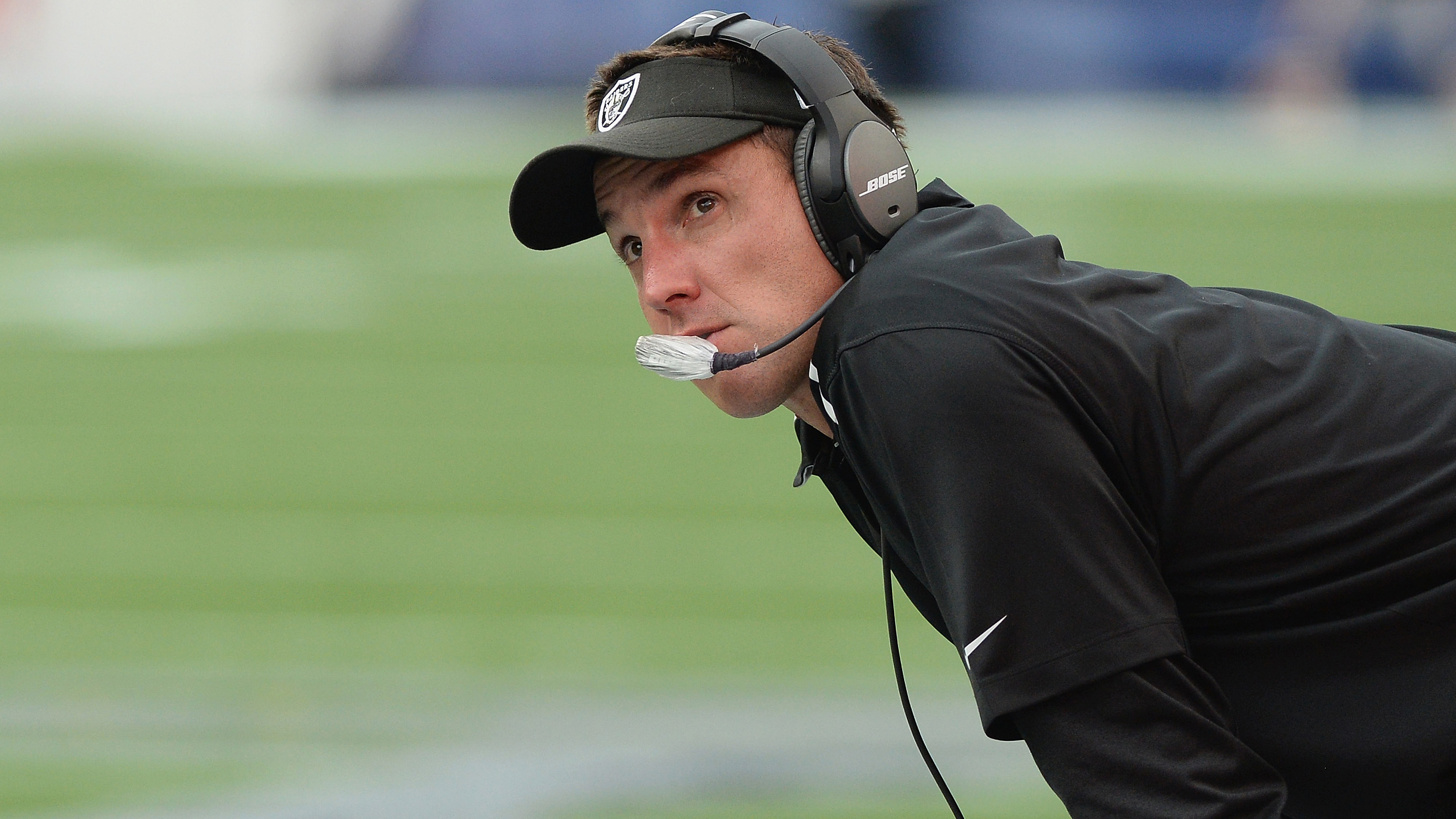 It’s going to be a long flight home for Dennis Allen and his Raiders. A week after looking presentable against the Patriots, Oakland was embarrassed by the Dolphins and rumors swirled that Allen was out of a job. Even though those rumors were dispelled, the loss had every mark of a train-wreck game that gets a coach kicked out of town. Even if that town is London.

Watching the ball sail past Matt McGloin, before Cortland Finnegan picked it up and scampered 50 yards to make it 38-7, it felt like an emblematic play of the Dennis Allen era in Oakland.

It’s no surprise Allen has had a difficult time taking over this Raiders roster, but in three seasons, there are no signs Oakland has gotten any better. It really has been a harsh decade for the Raider Nation.