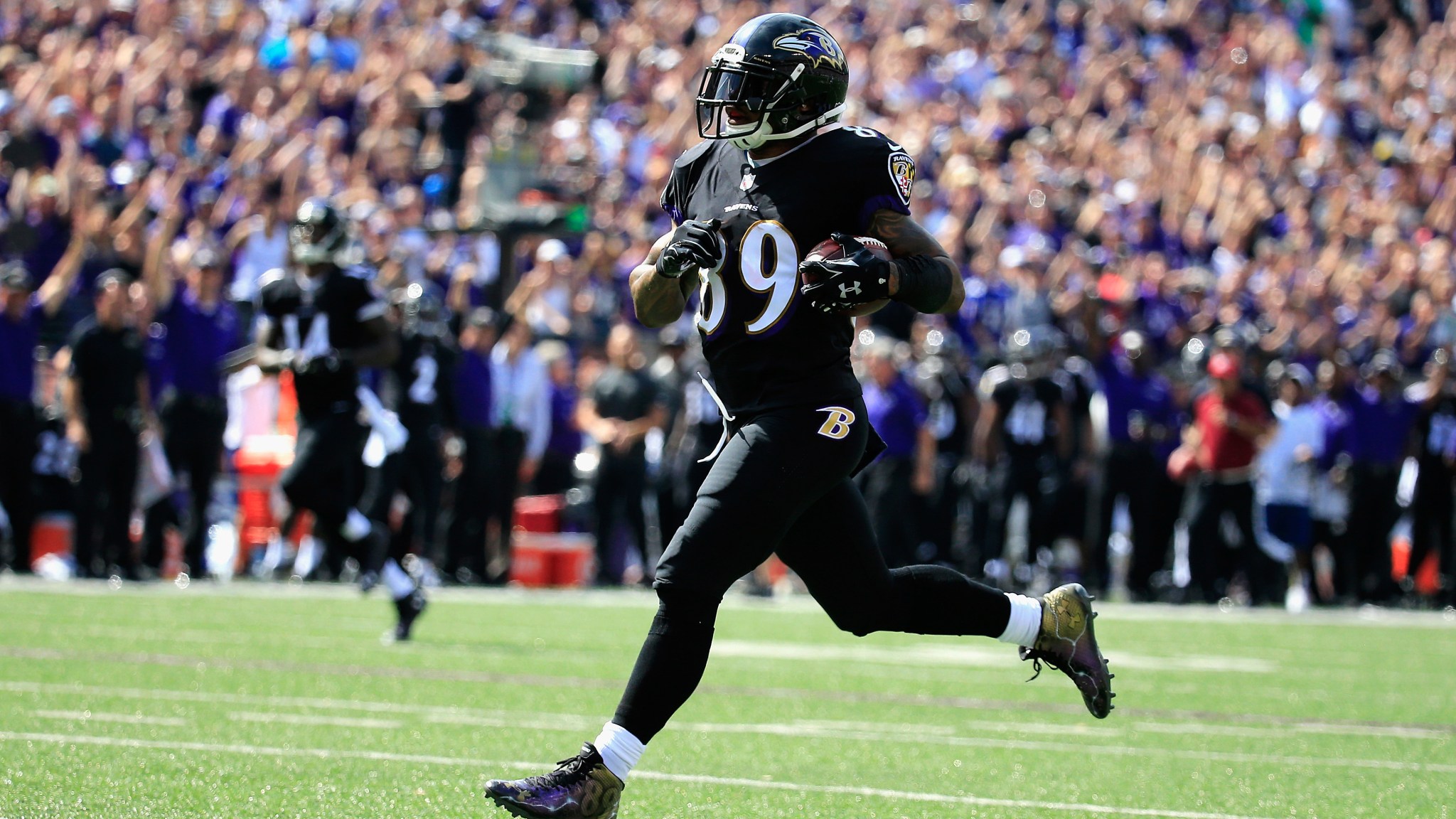 On the first play, you could tell there was nothing to worry about. Joe Flacco rolled out, hit Steve Smith in the flat, and Smith immediately stiff-armed some helpless corner to the ground, picking up an extra five yards and a first down. Because what do you do when you get burned by your team after more than a decade? YOU BURN THAT TEAM TO THE GROUND.

Turn on the sound for the full psychotic effect here:

You probably know the story by now: The Panthers cut Steve Smith after 13 years. When he responded to his release last spring, he issued a warning in regarding a possible matchup with Carolina: “Put your goggles on, ’cause there’s going to be blood and guts everywhere.”

Then came that promise on the sidelines in Week 1, and two 100-yard games to open his career with the Ravens, and everything was building to this past Sunday. I didn’t write about any of this on Friday because I didn’t want to jinx him. There was too much hype, and I didn’t want to watch Steve Smith go out and get shut down, or (more likely) disappear while the Panthers shut Flacco down.

Steve Smith rockin’ the “I Heart Haters” hat to the stadium…oh, it’s on. pic.twitter.com/HDbNdgN1qu

What was your favorite part of the day?

Mine was probably Jimmer Fredette.

And Steve Smith must be really mad at the Panthers. Unstoppable right now

Sometimes things just work out perfectly. That first half was so good, it didn’t even matter what happened in the second half, when the Ravens turned a solid lead into a blowout. Somewhere in Charlotte, Dave Gettleman is talking to himself, trying to convince himself everything’s gonna be OK.

I’m not saying this Panthers team is definitely cursed by Steve Smith, but it’s worth considering. Before the game yesterday, NFL Network’s Ian Rapoport reported that the team didn’t cut him because of performance, but because they were concerned about dividing the locker room. Smith apparently had questions about Cam Newton, and the Panthers coaches and front office wanted the team to belong to Cam, and Cam alone. They also thought they could find younger, cheaper receivers elsewhere. Whatever the case, Smith isn’t too worried about his long-term future with his former team.

As he told ESPN’s Ashley Fox this week, “When that time comes, I’ll be able to walk back in those doors and retire as a Panther and have the respect and not have such a split and not allow the few individuals in their temporary residence there to alter a decade of what I’ve done and experienced in that great organization. … I was there 13 years, and the way I look at it and what I was told, I’ll be there a lot longer than they will.”

For now, he’s already made the entire Ravens offense better, giving Baltimore three or four big plays every game and providing Flacco with a favorite target. That’s exactly what Smith did with Cam the past few years, only maybe even better. As Will Brinson pointed out, Smith is on pace for 100 catches, 1,700 yards, and 12 touchdowns with the Ravens. That would be his best season in 10 years. Smith is 35 years old.

Stats are mostly beside the point, though. The NFL is full of great players who put up huge numbers every week. Eventually, they all blend together in history. Steve Smith is an exception for me.

He’s a 5-foot-9 guy from L.A. by way of Utah, he came into the league as a special-teams star, and then he turned into the greatest receiver in Panthers history. We talk all the time about lovable underdogs, and this is what a real underdog looks like. He’s spent his entire career shattering expectations and proving people wrong. And then sometimes someone pisses him off, a switch flips, and he turns into Denzel in Man on Fire.

That’s what I’ll remember. Even the greatest playmakers in the NFL — guys like Calvin Johnson, A.J. Green, Larry Fitzgerald — do things that all fit the same pattern: amazing stats, ridiculous highlights, etc. But there’s nothing like watching Steve Smith after that switch flips. He goes after guys twice his size, flattens defensive backs, slices through secondaries, makes diving catches in the back of the end zone … everything. Carolina got it all on Sunday.

Steve Smith, Sr: "That film is a coaching session. I'm 35 years old and I ran around those boys like they were schoolyard kids." @NFLonFOX

Whenever things finally end for him, my favorite memory will probably be that game Sunday, because it was just that satisfying to watch him do it one more time. In the meantime, he’s still doing it. And there’s this video from last year’s playoffs, and he’s screaming into the camera after a touchdown, “BIG PLAYERS! MAKE BIG PLAYS! IN BIG GAMES!”

At this point, who in the NFL would ever be that stupid?

You know, other than the Panthers.

NFL Week 4 Winners and Losers: Put Your Goggles On for Teddy, Luck, and THE BUCS

The End of a Brilliant Summer: Rory at the Ryder Cup