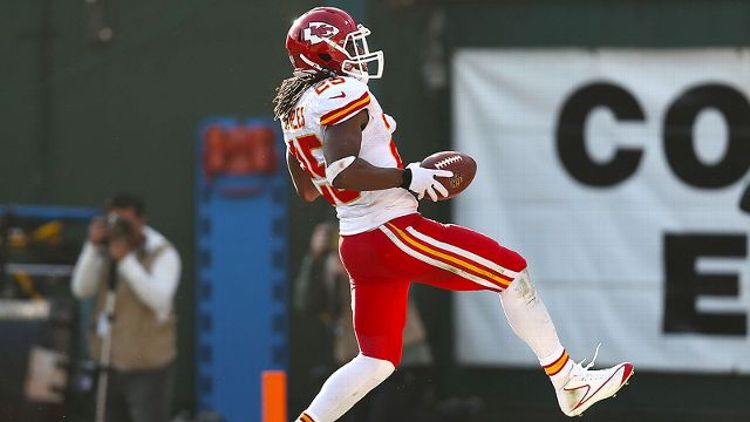 Jamaal Charles: Playing against Jamaal Charles in fantasy yesterday was traumatizing. I’m not sure it’s something from which I come back. Charles’s 215-yard, five-touchdown day makes him the MVP of every fantasy league in which he was still a factor, but it’s probably time his name came up in discussions about the actual MVP.

After yesterday, Charles now has 1,836 yards from scrimmage on the year — second only to LeSean McCoy, who, while spectacular, plays in a better offense, with better quarterback play, behind a better offensive line. There was a point two weeks ago when Nick Foles could have thrown 50 straight interceptions and still have had a better passer rating than the Jets’ Geno Smith. Charles doesn’t have that sort of help. He leads the Chiefs in rushing yards, receiving yards, receptions, rushing touchdowns, and receiving touchdowns. And he’s done it all behind an offensive line featuring a flailing first-year right tackle and plenty of shuffling on the interior, and with a passing game that Chad Pennington would be embarrassed of.

The Chiefs are 11-3 and still very much alive in their division and for the no. 1 seed. A lot of that is thanks to what their defense did for the first half of this season. But that defense has fallen of late, and this team wouldn’t have an offense without Jamaal Charles.

Vernon Davis: Every so often, it’s important to go back and look at what Vernon Davis did at the combine in 2006, just as a reminder that he is a member of a different species. We all know the bullet points of Davis’s career at this point (Mike Singletary, pants dropping, lessons learned, redemption), but based on the quarterbacks he’s played with and the way he is used, it still occasionally feels like Davis has never gotten his full due as one of the league’s best tight ends.

Having Michael Crabtree back is nice, but Davis remains the central tenet of the 49ers’ pass offense. Sometimes it’s as a decoy, tearing up the seam to clear out the middle of the defense. Sometimes it’s as a player who can streak past former top 10 picks for a 53-yard touchdown in a game that was closer at the end than the score actually indicates. (Without a crazy third-and-12 throw to Michael Crabtree in the fourth, the Bucs would have had the ball back down only a score.) In the replay, it looks like Davis actually accelerates to catch up with that ball after it’s thrown. Again, different species.

The Cordarrelle Patterson Effect: Leslie Frazier used the term in reference to teams squib kicking to avoid the terrifying rookie return man, but at this point, we can probably also use it when talking about the Vikings’ offense. Patterson had only five catches for 35 yards yesterday, but that included a touchdown and a long pass-interference penalty that gave the Vikings the ball near the goal line. Greg Jennings had 163 yards yesterday, but Patterson is still the takeaway from the Minnesota offense in the past two weeks. He’s approaching “Stop What I’m Doing, Cordarrelle Has the Ball” status, and that’s something the Vikings offense desperately needs in the next few seasons.

Let’s start with Robert Quinn, because this year, that’s where all conversations about pass-rushers probably should start. With two more sacks yesterday, Quinn now has 15 on the season — good for the second-best total in the league — but that says very little about how great he’s been this year. No one has hit quarterbacks more often, and no one has been able to take better advantage of some of the league’s worst offensive tackles. What Quinn did to Charles Brown yesterday should come with a parental advisory disclaimer. It was for mature audiences only.

Jared Allen (and teammate Brian Robison) added two sacks of Nick Foles as the Vikings somehow managed to be the first team in a month and a half to slow down the Eagles. And Cameron Wake was just Cameron Wake. Missing one game and playing just a few snaps in two others, Wake still has 8.5 sacks on the season, but yesterday, it was more about how often he was bothering Tom Brady. He finished with five quarterback hits, but it seemed like a lot more. It was a reminder that along with Rob Gronkowki and all the Pats’ injuries on defense, losing Sebastian Vollmer was a huge blow for them. It’s unfair to expect poor Will Svitek to deal with Wake all alone.

Ryan Tannehill: While we’re on Wake, we might as well mention the rest of the Dolphins. It was fitting that Wake managed to put one of his five hits on Brady to cause that final interception, but Miami needed a little something from everyone in that second half to get a win they desperately needed.

The biggest win of Ryan Tannehill’s career saw him outplay Tom Brady (25 of 37 for 312 yards and three touchdowns), and he did it with about as little help as Brady has. Brady may have had to worry about Wake, but the Dolphins’ offensive line is bad enough to give even the New England pass rush some life. A second-down sack made it 3rd-and-16 with Miami down three with about three minutes to go, and Tannehill needed a fourth-down throw to Charles Clay to keep both the drive and the Dolphins’ hopes of winning the wild card intact. This is a team with plenty of problems, but after this year, it’s safe to say quarterback is not one of them.

Robert Mathis: Accomplishments against the Texans probably need an asterisk at this point, but it’s worth noting that with sack no. 16.5 yesterday, Mathis now owns the single-season record for the Colts. Dwight Freeney never had more than 16. I guess that’s one way of stepping out from someone’s shadow.

Eli Manning: I thought it would stand forever. When Eli Manning threw those four interceptions on a windy Thanksgiving weekend back in 2007, it seemed like peak Eli Manning Face had been achieved. It was the Mona Lisa of scrunched-up confusion.

Then yesterday happened. It’s impossible to single out one reaction as the best, and I think that speaks to their collective greatness. Eli is on a historic interception run, but yesterday was about more than sheer totals. By the second half, the Seahawks secondary had turned this into a Globetrotters-Generals game. After taking a lateral on a fumble recovery (that was actually overturned), Earl Thomas ran backward about 20 yards while trying to put together a return. Richard Sherman had a Bill Russell–style block to his own teammate in the end zone. If it weren’t so entertaining, it probably would have seemed cruel. Bears fans everywhere are thankful for Eli and all he brings. After each horrific Jay Cutler interception yesterday, Eli responded with one just as bad. They’re somehow connected — with what is absolutely the most depressing psychic ability anyone could conceive.

The Eagles’ pass defense: I had some trouble deciding which fact about yesterday’s game was the worst, so I’ll let you guys decide. The choices: Matt Cassel’s 382 passing yards are the most by a Vikings quarterback since November 7, 2010; Matt Cassel completed passes of 57, 42, 37, and 31 yards; the 37-yarder was to someone named Chase Ford, who started the year on the Vikings’ practice squad, and yes, once played for the Eagles; Philly turned Greg Jennings into Randy Moss.

Just as it looked like the Eagles were finally turning things around on defense, they let one of the most anemic pass offenses in the entire league hang up 21 fourth-quarter points. It would be that much worse if it weren’t for …

I’m kidding — sort of. The Tony Romo, Season Killer narrative is the worst narrative, but I think all of us who have defended Romo for his entire career are getting a little frustrated. Help us out, Tony! Even just a little bit!

The interceptions were undoubtedly awful, but it wasn’t Tony Romo who let Eddie Lacy run for 6.4 yards a carry, let Matt Flynn throw for nearly 300 yards, or stopped giving DeMarco Murray the ball. (Quick aside: Murray has been great this season behind an offensive line that’s spotty at best, but I can sort of understand the hesitation about consistently giving a running back made of Popsicle sticks more than 25 carries in a game.) No, most of that would still fall at the feet of Jason Garrett.

Garrett may not call the offensive plays anymore, and he may not run the defense, but as a head coach, the performance of both those assistants still comes back to him. It was Garrett who turned the play-calling duties over to Bill Callahan before the season began, and it’s Garrett who’s ultimately responsible for Dallas hiring a 73-year-old defensive coordinator who hadn’t coached in the NFL since 2008. I honestly can’t imagine what it must be like to be a Cowboys fan right now. At least after yesterday, we probably won’t have to worry about having to watch this team in the playoffs.

Andy Dalton: Apparently everyone in the AFC wants to play on wild-card weekend. With Tom Brady finishing the game face-down on the turf in Miami, all the Bengals had to do was beat a 5-8 Pittsburgh team to give them, at least temporarily, a bye in the first round of the playoffs. In a continuation of the weekend’s theme, Cincy tripped over its own feet against a worse team and is now significantly worse off in the playoff picture than it would have been with a win.

Losing Terence Newman for last night’s game may have been enough for the injury woes of the Bengals’ defense to finally be exposed, but Cincinnati’s problems started where they most often do: at quarterback. Andy Dalton’s final line — 25-of-44 for 230 yards and two touchdowns — doesn’t look all that bad, but that includes him going 15-of-21 for 135 yards and both those scores after the Bengals had already fallen behind 30-7. Before that, Dalton was just 10-of-23 for 95 yards deep into the third quarter, against a pass defense that has been no better than middle-of-the-road this year.

The Bengals had a top-five defense, one of the best wide receivers in football, the best offensive line in football, and a young running back about whom the excitement is very warranted. With the continued injury problems on defense and the constant threat of Dalton Daltoning, none of that may matter.