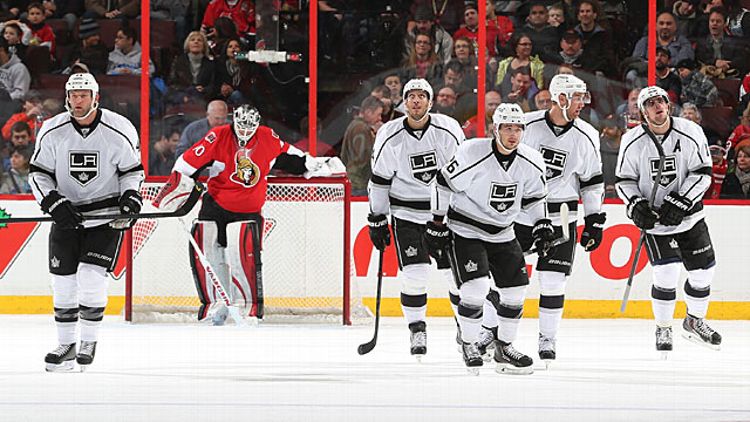 It’s Good to Be Kings

The Kings came into the weekend as one of the hottest teams in the league, riding a five-game win streak and outscoring their opponents 12-1 over their last three.

“We just keep winning. There’s a bunch of things going right right now, and we’ve just got to make sure we stay on top of it,” said Jarret Stoll after the game. “Even on this road trip we knew we were maybe getting away with some plays and some situations where they didn’t score, and we ended up finding ways to win games.”

This is normally the part where I’d touch on all the things the Kings have been doing well, but we have to post this on Monday morning and I’m not sure that gives me enough time to cover everything. So instead, let’s cherry-pick a few highlights. A good place to start would probably be, well, their good starts. Saturday’s game marked the 18th consecutive contest in which the Kings did not allow a first-period goal.

And then there’s the goaltending. The ink had barely dried on all the stories about backup Ben Scrivens being this year’s breakout star when along came backup backup Martin Jones to assume the title. He went 5-0-0 with a 0.99 goals-against average and .967 save percentage in the first five games of his career, and he has moved into a platoon with Scrivens for the starter’s job. Oh, and L.A. should be getting former All-Star and Conn Smythe winner Jonathan Quick sometime in the new year.

And while that level of goaltending is almost certainly unsustainably high, the Kings are currently shooting just 5.7 percent at even-strength close, which is probably unsustainably low. They’re also one of the league’s best possession teams. I’d get into some of the other advanced stats indicators but that would involve math and I don’t want to anger Darryl Sutter, so let’s just say they’re almost all positive. This team is good.

So how do you beat these guys? Being the Blackhawks seems to help, at least based on Sunday night’s 3-1 Chicago win. The Blackhawks apparently missed the memo about the Kings not giving up goals in the first period, as they poured three past Scrivens en route to a thoroughly dominating win.

The Kings now head back to L.A. for a four-game homestand that will take them to the Christmas break.

Well, that didn’t take long. Just 10 weeks into the season, Brian Burke pulled the trigger on the Jay Feaster firing that absolutely everyone had been expecting since September. (Although, in fairness, our own three-month prediction ended up being off by an entire day.)

That leaves the Flames’ roster in the hands of Burke, who won a Cup as GM in Anaheim and most recently had a turbulent run in Toronto, though he swears it won’t stay that way for long. At the Thursday press conference to announce the change, Burke told reporters he’d return to his role as president of hockey ops as soon as a search for a full-time GM could be wrapped up.

That may not take long, given that Burke has never been an especially patient type and the Flames are competing with the Sabres for the same pool of candidates. The rumor mill has already mentioned former Flames star Joe Nieuwendyk, and Burke may also choose to pluck one of his former Toronto front-office hires.

This year’s Flames have been a better team than most expected, which is to say that they haven’t been completely hopeless. But they certainly haven’t been good, sitting 26th overall with 31 points, and whoever gets the GM job should have a high pick to work with in the offseason. He’ll also have plenty of cap space thanks to a roster that lacks any especially onerous contracts, a point Burke made Thursday when asked to compare the Flames’ circumstances to the mess he inherited when he arrived in Toronto.

Burke’s tenure as interim GM got off to a good start with a pair of 2-1 wins, over the Hurricanes on Thursday and the Sabres on Saturday. It was the Rangers’ turn on Sunday night, and New York needed a late goal by Chris Kreider and a seven-round shootout to escape with a win. So make it five points out of a possible six for Calgary since Feaster was relieved of his duties. The Flames’ Eastern road trip continues this week with tough games in Boston, Detroit, and Pittsburgh, before returning to Calgary for a five-game homestand.

As for player moves, we won’t see any trades until after Christmas, as Burke’s infamous holiday trade freeze is already in effect. And demotions may be unlikely as well, since judging by Burke’s current hairstyle, he’s not in the mood to make any cuts.

Canucks Give Bruins the Finger

It was just a few weeks ago that we were lumping the Canucks in with the rest of Canada’s disappointing teams. Since then, they haven’t lost a game. I’ll graciously accept full credit for motivating them to turn their season around.

The latest win came Saturday in a grudge match against Boston. It was the first time the Bruins had visited Vancouver since winning Game 7 of the 2011 Stanley Cup final, and there’s clearly some lingering bad blood. The game featured a first-period fight between Ryan Kesler and Jarome Iginla that left the Bruins winger nursing an injury that you absolutely do not want to click on, as well as some ring-kissing taunts by Brad Marchand that even his own coach didn’t appreciate.

When the Bruins weren’t doing inappropriate things to their fingers, they were peppering shots at Roberto Luongo (he turned away 39 out of 41 on the evening) while watching Tuukka Rask suffer through a rare off night. Rask gave up four goals on just 23 shots, lasting just two minutes into the third period before giving way to backup Chad Johnson. The Canucks beat Johnson twice more on their way to a 6-2 final and have now won seven in a row.

Of course, this being the Pacific, even a seven-game win streak doesn’t gain you much ground. The Canucks remain in fourth place in the division, six points back of the Ducks for the lead, despite having the league’s eighth-best record. They head out onto the road this week for a three-game trip through Minnesota, Dallas, and Chicago.

• The NHL announced the Shawn Thornton suspension and, as expected, it was a big one: 15 games for his attack on Pittsburgh’s Brooks Orpik. That’s the largest regular-season suspension of the Brendan Shanahan era, and Boston fans will argue that it’s too high for a first-time offender. Then again, this wasn’t a typical incident, and there will be plenty who don’t think it was harsh enough. I’d argue Shanahan and the league got this one just right. And now we wait and see if Thornton exercises his right to appeal.

• Also suspended over the weekend: Toronto’s David Clarkson, who’ll miss two games for his high hit on the Blues’ Vladimir Sobotka. Clarkson has now been suspended twice for a total of 12 games this season, cementing his early leader status in the “biggest free-agent bust” derby. Your move, Stephen Weiss!

• The Leafs managed to overcome the loss of Clarkson, pummeling the Blackhawks, 7-3, on Saturday in what may have been Toronto’s best game of the year. Joffrey Lupul and Mason Raymond each had four points.

• Another suspension: Jets forward Anthony Peluso gets three games for a hit from behind on Dallas defenseman Alex Goligoski. Meanwhile, Pittsburgh’s Deryk Engelland will have a hearing Wednesday for this hit on Justin Abdelkader. It’s an in-person hearing, meaning Engelland could be looking at six games or more.

• Anaheim kept rolling, beating the Oilers on Sunday night to move to 23-7-5 on the season and joining the Blackhawks as the only teams to crack the 50-point mark.

• The Penguins earned a 4-1 win in Detroit on Saturday, but lost Evgeni Malkin to a leg injury. The star center went into the endboards awkwardly and had to be helped off. His status is unknown.

• While Malkin could be out for a while, another star is making progress on a return. Lightning sniper Steven Stamkos is skating again and appears to be on pace to make his return as early as the end of January.

• The Red Wings dropped a 3-0 decision to the Lightning and have now lost five straight. They’ve only scored twice in their last three, so good luck in advance to whoever has to make this team look exciting for 24/7.

• They’re still well back of a playoff spot, but the Predators have put together a nice little three-game win streak that included a 3-2 win over the Sharks on Saturday.

• Finally, don’t look now, but the Florida Panthers are … well, “surging” might not be the word I’m looking for, but could I sell you on “no longer embarrassing themselves”? They’ve won three straight, including Sunday’s 2-1 victory over the Canadiens. Their days of competing for last overall are long gone, and they’re even closing in on struggling Eastern teams like the Rangers and Senators.