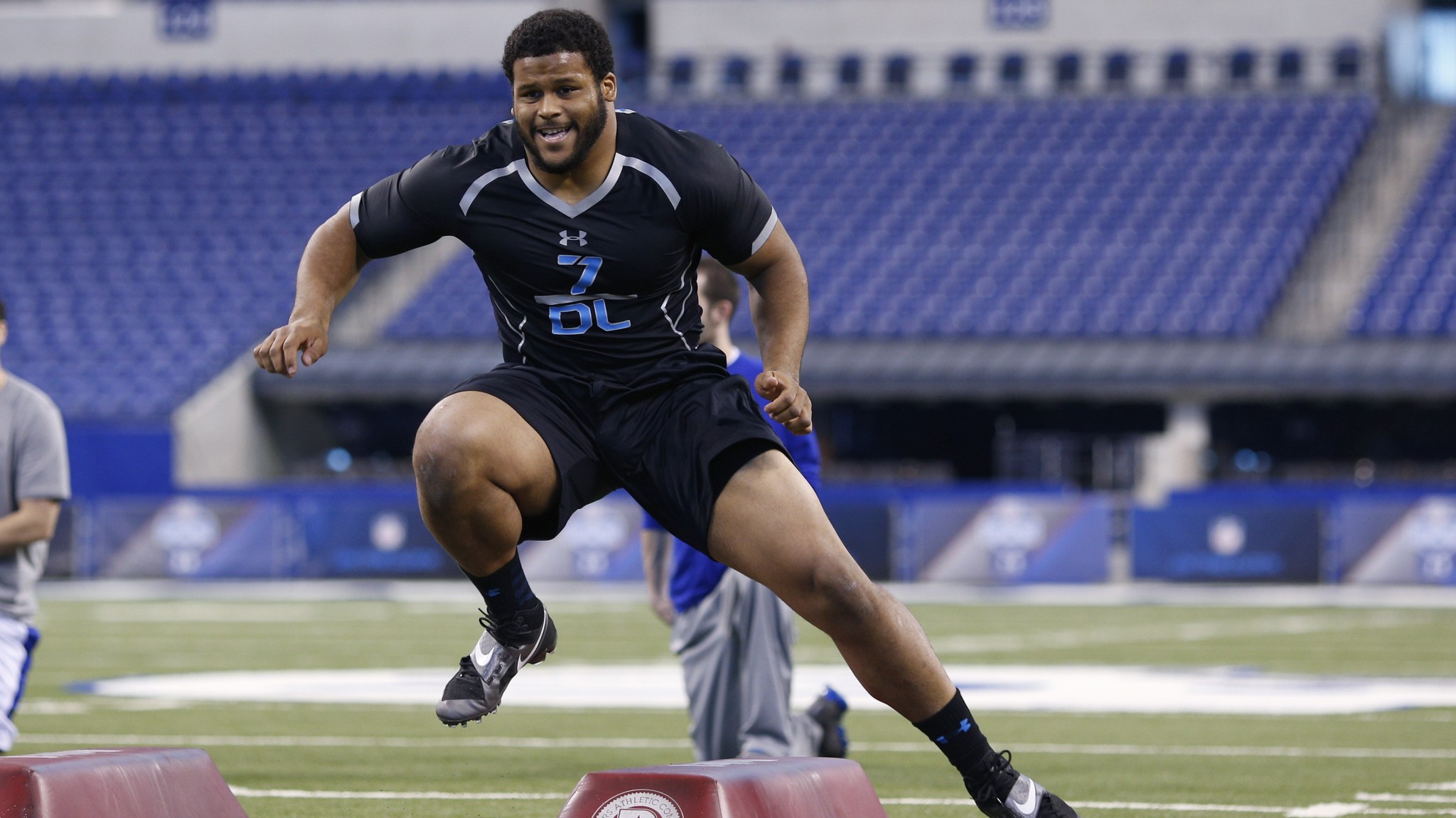 We’re just going to skip Jadeveon Clowney, if that’s OK. We all knew Clowney was beyond human from a physical standpoint, and his ridiculous 4.47 or 4.53 or whatever it was in the 40 is proof of that. Clowney doesn’t have a whole lot to gain from showing how fast he runs 40 yards in a straight line. Teams concerned about him aren’t worried about what he’s capable of. They’re worried about how often they’ll see it. And even those teams aren’t letting him fall out of the top five. Clowney is a monster. We get it.

The question, then, is who else was helped or hurt by their performance in Indianapolis. We have plenty of stories about the dangers of putting too much stock into a glorified track meet, but for some players, the times in Indy can be a validation or contradiction of everything scouts see on film. The combine isn’t everything, but it certainly doesn’t hurt to look good while you’re there.

Justin Gilbert, CB, Oklahoma State: Sub-4.4 speed isn’t necessary to be a lockdown cornerback in the NFL (Richard Sherman ran a 4.56), but Gilbert’s 4.37 (best among defensive backs) was just another box for him to check off in establishing himself as the draft’s best defensive back. He combines that athleticism with both a knack for being around the ball and for holding onto it when it comes his way (tied for second in FBS last season with seven interceptions), and his performance on Monday may have been enough to position him as the best cornerback in the draft.

Aaron Donald, DT, Pitt: Donald is the winner of the postseason draft process so far, and it’s not particularly close. A hyperproductive player in his senior season (28.5 tackles for loss, 11 sacks, and another 16 hurries), Donald was reportedly nothing short of the best player in Mobile during Senior Bowl week, and he carried that success over into the combine.

At 285 pounds, Donald and his 4.68 40 belong in any discussion with Clowney. And both his broad jump and vertical were impressive as well. Those three numbers combined have historically been a good predictor of overall explosiveness, and Donald has shown in the past couple of months that’s the trait he has over just about every other defensive tackle in the draft. He’s drawn comparisons to Geno Atkins, who also came into the draft as a slightly undersize defensive tackle, and earlier this week CBSSports.com’s Pat Kirwan compared Donald to Hall of Fame pass-rushing tackle John Randle. No one has made more money for himself in the past month than Donald.

Greg Robinson, OT, Auburn: Well, almost nobody. The reason Donald deserves that distinction is that Robinson’s momentum had begun way before the combine began, and as an early entrant to the draft, he didn’t play in the Senior Bowl. Robinson’s rise to the top 10, and even the top five, was a product of both Auburn’s visibility near the end of the season and his status as the best player in both the SEC and national championship games.

Anyone watching those games saw a 6-foot-5, 330-pound tackle simply mauling whoever happened to line up in front of him. It was the type of stuff — blowing guys five, six yards off the line of scrimmage — that rarely happens in games between major college football programs. Missouri, the team Robinson bludgeoned in the SEC title game, features a defensive line that will probably have four guys eventually play in the NFL. One of them, Kony Ealy, is set to be a first-round pick this year. And Robinson made them look like a middle school team.

That tape is still Robinson’s best path to being the first tackle taken, but using his time in Indianapolis to establish that he’s a biological marvel probably helped. Robinson officially ran a 4.92 in the 40-yard dash, second-best among offensive linemen. He also weighed in at 332 pounds. Combined with a smooth, natural look in plenty of the position drills (Robinson didn’t have to pass block much in college, so there were questions about how he’d look while moving), he’s probably done enough to make himself the most highly coveted tackle in the draft.

Xavier Su’a-Filo, G, UCLA: Guard isn’t near the level it was in last year’s draft, and there’s also a little more murkiness among the few top guys at the position. Su’a-Filo reportedly looked very good during the position drills, not surprising considering he spent some time at tackle during his career at UCLA. As more teams find players like Michael Bennett and Greg Hardy to line up over the guard in their sub rush packages, guards who are smooth in pass protection and can match up with bigger defensive ends will be at a premium, and Su’a-Filo seems like that sort of player.

The Fast WRs: Again, a blazing 40 isn’t a requirement for success at wide receiver in the league (see Allen, Keenan), but it’s proven to help guys on draft days past. Oregon State’s Brandin Cooks was already considered a first-round pick, but winning the 40 among wide receivers (4.33) should secure that status for the 5-foot-10 185-pounder. LSU’s Odell Beckham wasn’t far behind, running a 4.43 of his own; he’s also in the late-first mix.

The receiver who continues to be intriguing is Ole Miss’s Donte Moncrief. At 6-foot-2, 221, Moncrief is massive, and he turned in maybe the most impressive collection of numbers for a receiver at the combine. His 4.4 40 is incredible for someone his size, and he added a nearly 40-inch vertical and a broad jump of 11 feet, best among wide receivers. Mock Draftable has very cool visualizations of percentile finishes in both timed drills and measurables at the combine, and although some of them can be pretty misleading, the name that comes up as Moncrief’s best physical comparison warrants mentioning: Cordarrelle Patterson, maybe the most exciting player in the NFL.

De’Anthony Thomas, RB, Oregon: Long before he was letting me yell at him on podcasts, Bill Barnwell was writing over at Football Outsiders. It was there, maybe five or six years ago, that he developed a metric that tried to put combine 40s into context for running backs. All 4.5s are not created equal. Running one as a 220-pound thumper is more impressive than doing the same as a 180-pound change-of-pace back. The result was Speed Score.

Aaron Schatz broke down the Speed Score for most of the backs at the combine this year, and notably far down the list was noted speed freak De’Anthony Thomas. At just 174 pounds, the track star needed to blow away the 40, and didn’t. His 4.5 meant only five backs at the combine had a worse Speed Score. Thomas has to hope that teams see a player on tape who’s faster than what he showed last weekend.

Ka’Deem Carey, RB, Arizona: That happens. Cardinals general manager Steve Keim said last weekend that when he watched Andre Ellington’s tape last year, he saw a player who was much faster than the 4.6 he ran in Indianapolis. We all know how that turned out.

There are some times that are particularly tough to overcome, though, and Ka’Deem Carey’s might be one of them. Carey was a very productive back during his time at Arizona, but a 4.7 40 is down in the “deal-breaker” zone for running backs. There isn’t a standard for how fast a back has to be, but there is a standard for how slow he can’t be.

Jarvis Landry, WR, LSU: Wide receiver isn’t exactly like running back when it comes to speed. Players like Anquan Boldin, runners of 4.7s in the 40, can survive, but they’re rare. It looks as if Landry may have to hope he’s the next one of those players.

Landry has incredible hands and developed a reputation at LSU as a player who went to get balls other players couldn’t, but all the route-running savvy in the world may not be enough to overcome a 4.77 40. Boldin has the benefit of being a big-bodied tackle breaker who can simply run over people. At 6 feet, 195, that’s not a benefit Landry brings.

Cyrus Kouandjio, OT, Alabama: Some people will tell you the combine’s main function, aside from being a gathering place for all the world’s football media, is a standardized doctor’s exam. It’s a setting where every team doctor can come and poke and prod at players at the same time, and it saves plenty of time and money.

Every couple of years, we hear about a potential top prospect who gets docked by the medical process. Last year, it was Star Lotulelei, who many thought could be the first overall pick but eventually fell in part because of a heart condition discovered at the combine. Kouandjio’s condition isn’t nearly as serious as it relates to his health, but as it relates to his football career, it might be even more damning. Kouandjio reportedly failed several team physicals because of an arthritic knee from a failed surgery. It’s likely to be a significant blow to a player many considered to be destined for the top 10 before the season started.

Sources said Tuesday the San Antonio Spurs and Granger share a mutual interest if the former All-Star comes to a buyout agreement with the Sixers by the weekend.