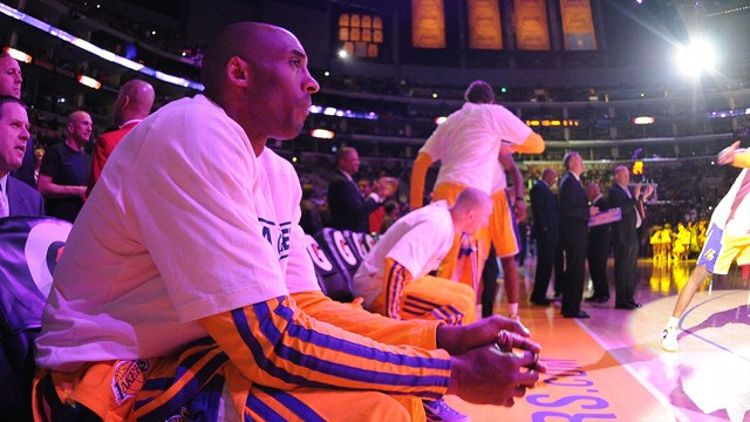 Robert Mays: I haven’t looked at the box score from last night’s Lakers win, and that’s on purpose — because I really don’t care to see it. I don’t know if Kobe Bryant went 10-for-30 or 15-of-25. I don’t know if he turned the ball over five times in a first half that I missed, or missed a dozen free throws. I do know that he scored 23 points in the Lakers’ 34-point fourth quarter, and that when Kobe was doing what he did last night, I have no use for words like “efficiency.”

Countless words have been written about the Bryant we saw last night — the one jacking up shots from the worst spots on the court, with the game tied, trying to carry his team to a win. All I know is that watching Kobe hit his first three shots of the fourth and knowing that this is what we’d be in for is one of my favorite spectacles in basketball. Yes, it’s ridiculous, and yes, it might ultimately cause more harm than good, but knowing what that building feels like when he gets started sort of makes me a sucker. If the Lakers make the playoffs, it won’t be because of what Bryant did last night, but again, that’s letting logic get in the way. And logic has no place here.

In the final moment of the game, O’Neal took the game into his own hands by doing the one thing he’s done consistently for 17 years: protect the rim without discretion or common sense. Like, seriously, the guy handed the Rockets a W by goaltending a 3-pointer. We may never see another goaltended 3 in our lifetimes, let alone one that decides a game in the final seconds. The play was so unthinkable, I’m inclined to believe he did it for a reason. This is the same man who played through serious injuries in Indiana just to give fans a reason to show up. He’s used to sacrificing himself for the team. This Suns squad, which threatens to be the worst iteration since their debut season in 1968-69, is in full-on tank mode, as they should be. The future depends on continued failure. In spite of Luis Scola’s incredible offensive performance and the Suns looking fairly competent all night long, O’Neal made sure he did what he needed to do by putting in his worst game of the season. The Suns have now lost 10 in a row and will likely have the third-best shot at the no. 1 pick in the draft. It’s a thankless job, but someone had to do it.

Chris Ryan: I’m not that into sadism, so I don’t watch the Hornets very much, but I thought they played some really nice stuff against the Lakers. They just needed better finishers. If Los Angeles moved the ball like Monty Williams’s team, they wouldn’t be in this predicament right now. The Hornets got a lot of penetration from Eric Gordon, some decent stretch-4 play from Ryan Anderson, and, most of all, a great performance from the no. 1 overall draft pick, Anthony Davis. New Orleans wound up losing the game (I think Kobe Bryant would’ve been re-enacting The Wicker Man on the Staples Center floor had they not). But Davis was the big revelation; swanning around above the rim, diving after pick and rolls, and completely losing Pau Gasol and Dwight Howard in transition. Where the two Lakers bigs tend to make a beeline for the hoop, turn around, and then wait for service, Davis seemed to linger in ambient spaces around the foul line, timing his runs to the hoop with intuitive precision. When it worked, like it did in this GIF, it was like watching a DeLorean speed past an old Nissan Sentra on the highway. He’s the new model.

5. Carmelo Anthony’s Sense of Humor About Himself

Ryan: When your team just won its first Atlantic Division title since the 1993-94 season, you’ve just had your fifth straight 35-point game, putting your name in the same sentence as Bernard King’s, and powering your team to its 13th straight win, then you can afford to laugh at an air ball from time to time.

Derek Jeter's Diary: Pottery Is No Substitute for Baseball