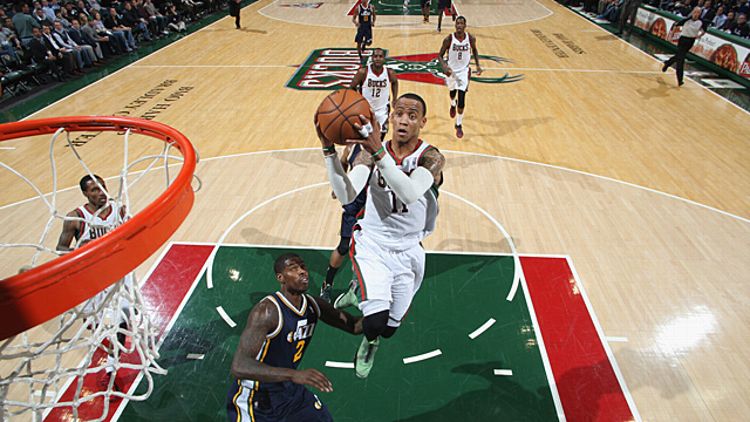 Ellis had 34 points on 15-21 shooting last night, leading his Milwaukee team to their second overtime win in as many games (this time over the Jazz), and their fourth straight win overall. With J.J. Redick in the lineup, Monta’s averaging 21.5 points, 9.3 assists, and 4.3 steals per game. He also does stuff like this.

That’s Brandon Jennings going halfway behind his back and then over his defender to Ellis for two points.

And there you have Jennings burying the equalizer 3, with Alec Burks in his face. I know, deep down inside, that the Bucks are not an efficient, or particularly effective, team. I know that lineups made up of Monta Ellis, Brandon Jennings, J.J. Redick, Ersan Ilyasova, and LARRY SANDERS! are not the stuff that Larry O’Brien Trophies are made of. All I’m saying is that I really, really like that lineup. I really like this team. So does the crowd at the Bradley Center, based on their reactions to the action last night. And if these guys want to do the Cardiac Kids/Fear the Deer 2.0 thing for the rest of March, you’ll hear no objections from me. They basically have the eighth seed wrapped up and are only a game behind Boston for the seventh. I like them to at least give the Pacers some problems (they’re up 2-1 on the season series with one more to play).

I wonder if they let Anthony Tolliver on the team plane after this? JaVale had five blocks in 17 minutes played. When Rembert sent this to me this morning, I asked him how he thought Anthony Tolliver felt. His response: “It’s reminiscent of when a little boy finally gathers the confidence to ride his bike without the training wheels, and then on that first crutch-free ride, gets jumped by the neighborhood Skip-It gang.”

Couple of things here: This is a strong Iguodunka …

The Corey Brewer (22 points, by the way) pass is sitting right on the intersection of “dope lob” and “widowmaker” …

That’s now 11 in a row at home for the Dunkets. Go there at your peril, Western Conference playoff foes.

Here’s the thing: He’s not only saying he would’ve smacked Serge Ibaka in the mouth, he’s also, subtly, calling Blake Griffin what J.J. Barea called Ray Allen last night. That, my friends, is how you do that.