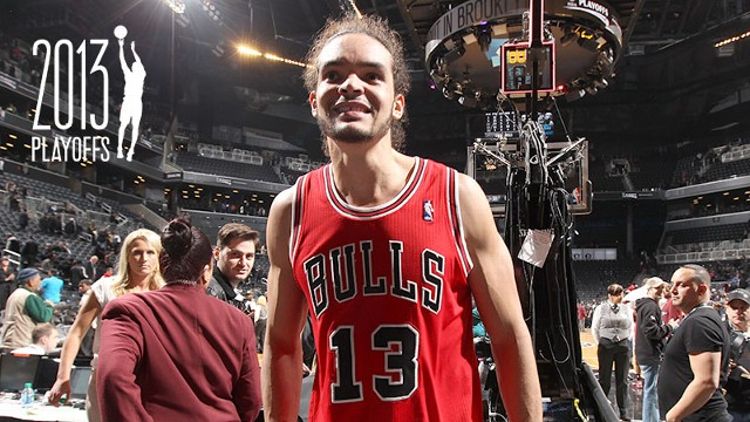 A survey of the players and coaches making moves last night in Brooklyn.

There will be a lot said about grit and heart and all that today, and while a good portion of the praise heaped on Noah this morning will really be subtweets about Derrick Rose, Noah really does deserve every key punched and bit of ink spilled. His plantar fasciitis kept him out for a majority of the last month of the season, and for anyone who’s watched the Bulls this year, it’s not hard to imagine what sort of injury it takes to earn a minutes limit.

Luol Deng should get some credit for again quietly leading the league in playing time, but it’s Noah who’s provided the life for this Bulls team all year. It’s no coincidence that Chicago got blown out with him playing only 13 minutes in Game 1, and it’s no coincidence that the Bulls were lifted by his presence last night. When Noah game came back in the fourth quarter, a 14-point Bulls lead had shrunk to five, and all he did, on consecutive possessions, was follow up a dunk with a diving-out-of-bounds save to Nate Robinson for the game-sealing 3. And let’s not talk about his reaction after sending back a Brook Lopez hook in the final minute. I might get too emotional.

I have no idea what makes Tom Thibodeau able to take a team that looked to have cashed it in and get them playing like 10 possessed dudes wielding table legs two days later. I guess it doesn’t really matter.

Nazr obviously saw everyone jump into the way-back machine this weekend and figured it was time to get his. Jokes about midrange prowess aside, getting 18 good minutes from Mohammed was invaluable, in that it allowed Chicago to sustain its lead without Noah on the floor. Going 4-of-5 from the field was nice, but Mohammed’s effort defensively, both as a team defender and on Brook Lopez, was a huge boost.

It was written more than once this season that Kirk Hinrich was the key to the Bulls’ success. See, the Bulls seemed to win a lot when Kirk was on the floor and lose a lot when he wasn’t. To some, this was much more than mere correlation, and if the Bulls had any playoff hope, Captain Kirk would be at the center of it. Considering that Hinrich has fallen off as a defender from where he was during his last Bulls stint, and that his True Shooting percentage this season is hanging out below 50, I’m not ready to lump him into the MVP conversation just yet, but his performance last night on Deron Williams was vintage Kirk. Williams went 1-for-9 from the field as Hinrich pestered and pushed him around all night. Quick guards are a challenge for Hinrich at this point, but he’s still willing to up the physicality whenever asked. And it’s part of the reason that those around Chicago will always appreciate him just a bit more than he might deserve.

No, guys, seriously, did you see Game 1? Thibs spiked the Gatorade. I have no other explanation.

I’m sure everyone is going to be super chill about Noah dragging his leg around while the Bulls battle for a chance to play Miami in the next round. Super chill. Personally, I’m fine with it. That suit from last night, though? Not so much.