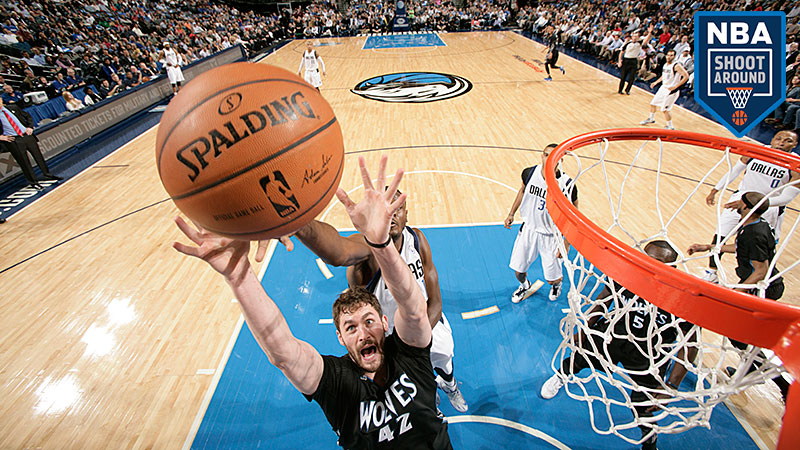 I Hear a Symphony

Steve McPherson: Kevin Love doesn’t wear Nikes. He doesn’t wear Adidas or Under Armour. Love wears a custom line designed by a Chinese company under the brand name 361º. His fellow 361º “basketball spokesperson”? Stephon Marbury, whose Starbury line has migrated to this same company. As ludicrously amazing as the company’s promise to “Free Your Basketball,” as gleefully nonsensical as the idea of adding one degree to a circle as some kind of metaphor for going above and beyond, nothing about the site is as awesome as the full description of Kevin Love’s game, which I personally never realized had so much to do with classical music. 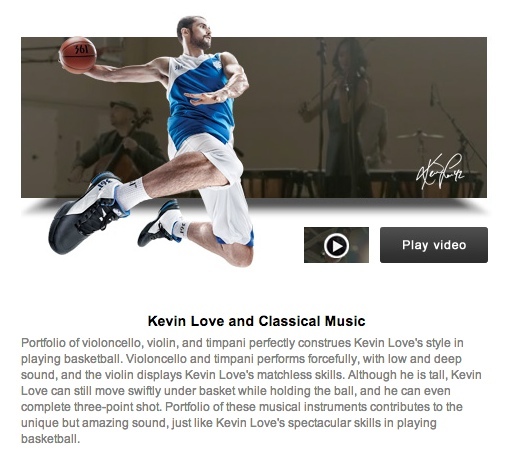 It’s true: He can complete three-point shot. But last night against the Mavericks, he took just five shots from beyond the arc, scoring most of his 35 points from midrange and closer. None were more important, though, than the two he managed on the Wolves’ last offensive possession, when he moved swiftly under the basket while holding the ball to execute a nifty up-and-under that would have made Kevin McHale proud. He kept his composure (composer?) on the next defensive possession as well, hounding Dirk Nowitzki from the top of the key to the foul line and getting his hands up. Dirk’s shot wasn’t flat, but it was still longer than a French horn stretched out to its full 12-foot length. 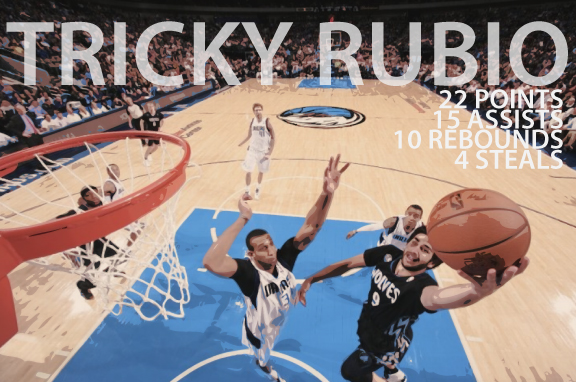 Kirk Goldsberry: Last night the Dallas Mavericks hosted the Minnesota Timberwolves in the second game of a crucial eight-game homestand. The Mavs are on the inside of the Western Conference playoff picture; the Wolves are on the outside, yearning to get in. It was a fantastic game. Although Kevin Love deservedly gets a lot of shine for his night, Ricky Rubio deserves some, too. He played outstanding basketball.

In 49 minutes (49 minutes!), Rubio put up 22 points on 8-of-12 shooting, but he also logged 15 assists and 10 rebounds. In the advanced metrics community, we call that a triple-double, you guys. It was Rubio’s third career triple-double. I have cast a lot of aspersions on Rubio’s shooting, but it’s clear that the kid can play, and last night proved he can be a difference-maker in big games. If he keeps playing like that, there’s still a chance the Wolves can get in some of those big games that start a month from now.

The Bank Is Open

Get Rich or Die Trying

netw3rk: Shaun Livingston is risen. The player who once led the league in most usages of the words “gruesome” and “injury” in articles written about him has emerged as a profoundly important part of the Nets’ post–January 1 25-10 record. Dude is playing the best basketball of his career, making you forget about the multi-season post–knee buckling interregnum, which I am now making you remember because I am mentioning it.

He has started more games this season (43) and played more minutes (1,649) than any other season, pre- or post-injury. His length and wingspan from the guard position gives the Nets’ backcourt the equivalent of a blank Scrabble tile — quick enough to handle guards, big enough to handle forwards. Since January 1, the Nets are 7.1 points per 100 possessions better with Livingston on the court.

Last night, against reigning Eastern Conference Player of the Week and low-post lord Al Jefferson and his plucky Bobcats crew, Livingston started the first half 5-of-5 from the floor. He had a behind-the-back-dribble turnaround jumper over Hendo; streaked into the lane for a putback dunk; and dropped a 14-foot pull-up wetness and a hook shot off the right block, both over the helpless form of Luke Ridnour. Final line: 17 points, two assists, and three rebounds, all on a vet’s minimum one-year deal. The Nets don’t own Livingston’s Bird rights, and are famously over the cap like the International Space Station is over planet Earth. 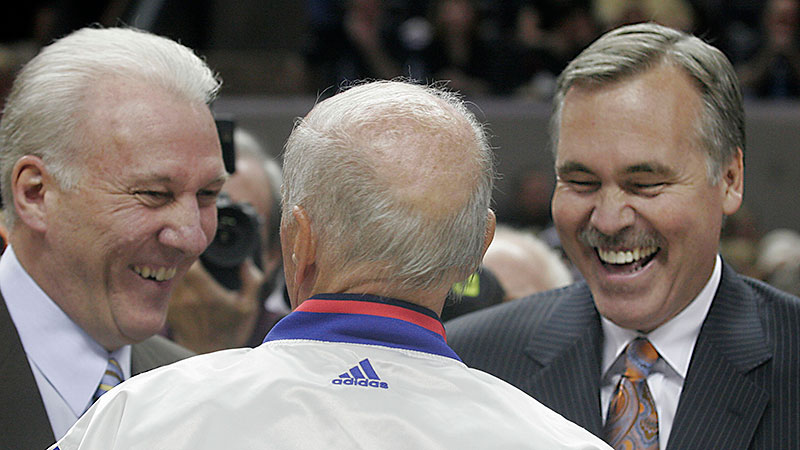 Jared Dubin: With last night’s 125-109 loss to the San Antonio Spurs in the books, Lakers coach Mike D’Antoni now has a record of 9-26 in the regular season against Gregg Popovich. That record gives D’Antoni a regular-season winning percentage of .257 against Pop. That is not good! His winning percentage in all other regular-season games is .531, which I believe is much better.

Every Time I See You in the World, You Always Step to Bazemore

Jason Gallagher: Back, back, way back, I used to listen to “Step” by Vampire Weekend and just vibe to Ezra Koenig’s swooning salute to Souls of Mischief. I never gave a second thought to the deeper meaning until I suddenly found myself relating to the author. The song is about our relationship with music and in particular the feeling of loving a small band from the beginning, and seeing it suddenly grow in popularity. It’s the long journey that begins with feeling insecure by the new kids “stepping to your girl” and continues to finally accepting that your girl deserves to be “stepped to” by the masses. Thanks to Kent Bazemore, I now know this feeling.

I was first turned on to Bazemore, like many, because of his bench celebrations. I instantly became a disciple of the Bazed God by writing columns, Photoshopping images, and making the Internet’s first Bazemoring GIFs. I’m not proud of many things, but I do take pride that when you Google “Kent Bazmore Gif” or “Bazemoring GIF,” the top results are all made by me. I was such a believer that even Bazemore himself took notice. He began following me on Twitter and at one point he even made his avatar a Photoshopped image I created of him Bazemoring at a wedding proposal. It was a small following, but things were good. His popularity slowly began to grow and I started to feel possessive. If someone asked, “Have you seen this Bazemore guy?” I’d reply, “Where have you been?” like a snarky teenager. Stupid. I know.

Kent Bazemore is now playing meaningful minutes for the Lakers. Initially, it felt like my favorite indie band signed with Columbia Records or something. But like the author of “Step,” I came to the realization that Bazemore was not meant to be loved by few, but by many. I’m at peace with that. A new crowd will enjoy Bazemore and come to understand “Bazemoring,” not as a bench celebration, but as a basketball player playing decent basketball. Feel free to step to my girl.

Timofey Mozgov Will Have His Revenge on Basketball

Chris Ryan: Timofey Mozgov traveled across oceans of time to get to this moment. 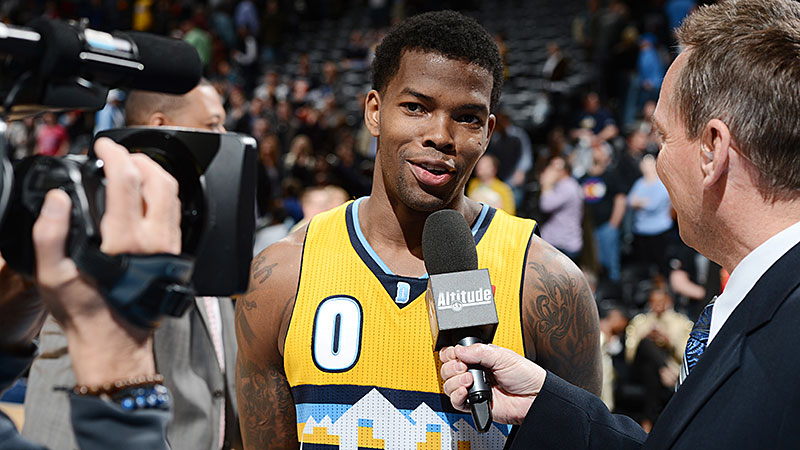 Danny Chau: Aaron Brooks’s monster performance against the Pistons was proof that basketball is all about matchups — matchups and the human spirit. Brooks scored 27 points and dished out a career-high 17 assists. He had a breather in the second quarter that lasted 84 seconds of game time, but that was it. He played nearly the entire game at home under the oppression of Denver’s natural forces — the atmospheric pressure alone would be enough to snap most men of Brooks’s stature in half after climbing a few sets of stairs, let alone playing more than 46 minutes in an NBA game.

Both teams had pillars that were crumbling. Brooks’s invitation to marathon the entire game was offered because of the Nuggets’ severely depleted backcourt. Ty Lawson was recovering from a groin injury and a headache that had developed before the game. Wilson Chandler sat out to rest a hip injury. This meant Brooks and Randy Foye shared the court for 43 minutes and attempted at least 18 shots apiece, with only one other Nugget getting double-digit attempts (Darrell Arthur with 11, oddly enough). Normally this would be my personal hell, but they happened to be playing a Pistons team that didn’t have Andre Drummond for the game (neck injury), and Josh Smith for most of the second half (ejected). Hell is other people, but specifically, it’s watching Charlie Villanueva take over for the Pistons in crunch time.

Aaron Brooks had 17 points and 11 assists in the second half, and attempted all of his seven free throws in those 24 minutes. Naturally a marksman from deep, he attempted only three 3-pointers in the second half. The Pistons had no rim protector left on the roster, and even if the atmospheric pressure had given Brooks a hernia, he’d still be able to run circles around Greg Monroe. 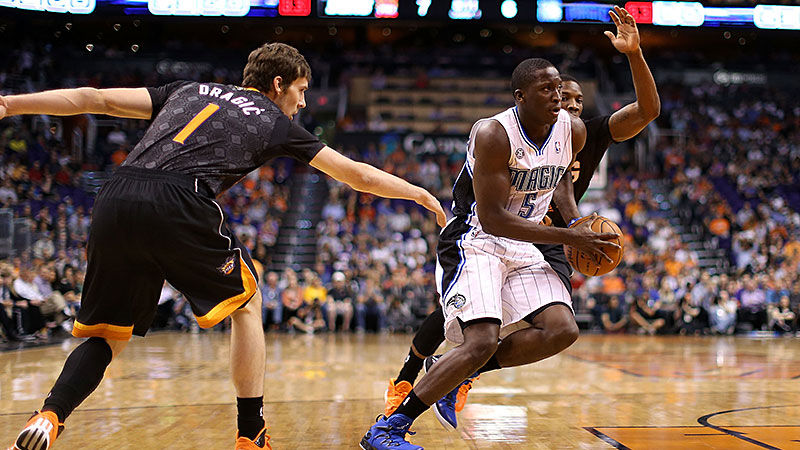 Brett Koremenos: After scouting him before the draft and seeing him live in summer league, I was convinced that Victor Oladipo was going to be the NBA Rookie of the Year this season. Yet despite the 2013 draft class being unable to live up to its already low expectations, Oladipo has failed to stand out. Watching him live against Phoenix, it was easy to see why.

Last night I saw a young player thinking too much and too little. Oladipo finished the night with just 14 points on 6-of-18 from the field and committed six turnovers. Things we often take for granted with veteran point guards — getting teams into sets quickly, making sure guys are in the right spots, etc. — still isn’t natural for Oladipo. And when he attacked the rim in the half-court, out of basic pick-and-roll sets, there wasn’t really a clear purpose. He had some impressive finishes thanks to his outstanding athleticism, but like the Joker in The Dark Knight, Oladipo just does things. Instead of being aware of how his movements change the shape of the defense, Oladipo merely reacts to the consequences of his actions.

Defensively, it was much the same story. Against the Suns’ pick-and-roll attack, he showed little effort and spent a lot of time getting hung up on screens, despite the absence of any KG-level screen setters for Phoenix. The Magic were playing in the second night of a back-to-back, and the Suns game was Oladipo’s 67th of the season — by far the most he’s played during a season in his basketball career.

I saw a tired kid on the court, overwhelmed by both his role and the long grind of an NBA season. The silver lining in all this, however, is that even such a middling performance is likely to pay off handsomely in the long run. Oladipo definitely has a lot in common with a young Russell Westbrook, who, it should be remembered, looked something close to awful during most of his rookie season with the Thunder. So while Oladipo hasn’t been a force to be reckoned with to start, it doesn’t mean you should count him out from being one in the not-so-distant future.