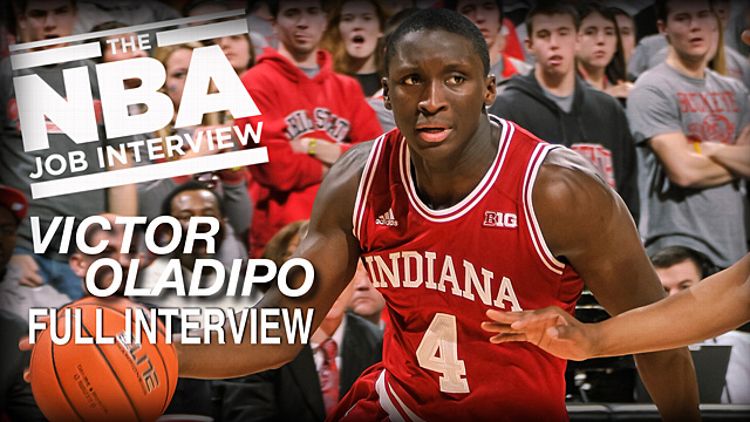 Jalen Rose and Bill Simmons question NBA draft prospect Victor Oladipo about his improved jump shooting, the comparisons to Dwyane Wade, and his fear of crying on draft night. Check out a short clip below, followed by Brett Koremenos’s scouting report and the full-length video. Watch all the NBA Job Interviews, here. And be sure to watch this space for more NBA Job Interview videos, featuring Bill Simmons, Jalen Rose, and some of the best young talents from the 2013 NBA draft class.

Victor Oladipo has a chance to be one of the league’s elite players. After two solid but unspectacular seasons, the Indiana wing turned in a fantastic junior year, firmly establishing himself as one of the nation’s best players. Oladipo shot an incredible 59.9 percent from the floor, 44.1 percent from 3-point territory (albeit on just 68 attempts), for a True Shooting Percentage of 67.1 — a staggering number, good for eighth best in the entire country. On top of that, the 6-foot-4 Oladipo, who operated at times as a power forward, finished the year ranked 44th in offensive rebounding percentage, the only guard ranked in the top 50 of that category. By the numbers alone, it’s easy to see that the 21-year-old with a 6-foot-9 wingspan has a real chance to be special.

What really sets Oladipo apart from the other guards in this class is his nonstop motor. He has the potential to become a versatile defense stopper, capable of guarding three positions at the NBA level. At the very least, Oladipo should turn out to be a top-notch perimeter defender, along the lines of Tony Allen.

His offensive game is what really gives him a chance to be special. A relentless attacking player in the open floor, Oladipo’s strength and athleticism should allow him to thrive in an up-tempo system as a finisher on the break. But even in the half court, the Indiana guard shows promise attacking out of pick-and-rolls — especially in the middle of the floor where he can attack downhill like Houston’s James Harden. With some work on his mechanics, there’s a great chance Oladipo ends up a reliable shooter both off the bounce and spotting up on the perimeter.

With great defensive potential and multiple ways to score in the half court, Oladipo is equipped with all the tools needed to be an elite, two-way force.