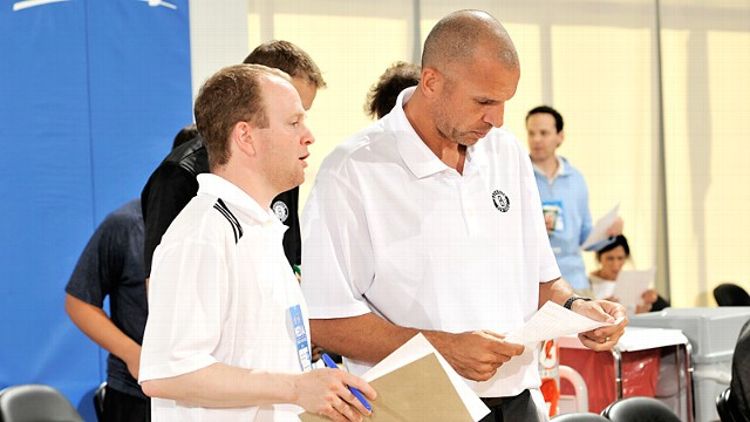 Day 1 of the Orlando Summer League could be summed up in one word: long. Turns out five 40-minute games, a seemingly endless number of fouls, and some shoddy, disorganized play can truly test your love and appreciation for basketball. Yet I persevered and somehow managed to cobble together some notes.

If there were a Vegas line on what player would emerge in my notes from the first game between Houston and Philadelphia, the odds on Jack Cooley would have been about 50,000 to 1. The Notre Dame alum didn’t put up a killer stat line (eight points, six rebounds in 14 minutes) but he did put in killer effort. To say Cooley played hard would actually be a major understatement. The 6-foot-9, 240-pound forward was a rather large man possessed. Cooley ran the floor, battled on the boards, communicated on defense, and generally hustled his way into my heart. And I’m sure I wasn’t alone.

Summer league is a perfect place for a fringe player like Cooley to endear himself to NBA teams with his rugged, energetic style of play. While the NBA is in an era in which stats and efficiency allow for cold, calculating evaluations of players, Cooley’s good ol’ fashioned efforts are enough to warm the hearts of coaches and executives. Guys that play hard every time they step on the floor may not be statistical darlings, but they are good to have around when coaches need to breath some life into the doldrums of the NBA season (also, Cooley must be doing something right in the stats columns if he’s on Houston’s summer league roster). Players like Mark Madsen survived for years purely on toughness, effort, and rebounding, and Cooley seems to be cut from a similar cloth.

The other intrigue surrounding Cooley seems to be that he’s the type of player who hasn’t reached his full potential as an athlete. As I recently wrote on HoopSpeak, physical movement is something NBA terms are currently neglecting, and Cooley is one of the many athletes who could benefit from a regimented dose of corrective exercise. His running style is high and upright, and his right foot rotates out about 30 degrees (think between “2” and “3” on the face of a clock) even when standing still. When squatting into a stance, it becomes even more pronounced. Without a full examination by someone who is truly qualified (which is not me), it’s hard to say what exactly causes an issue that is currently limiting Cooley’s athleticism (for anatomy nerds, best guess is that he has tight external rotators or tight adductors), but there’s a good chance that whatever the issue, a savvy training staff can correct it. If Cooley can improve his movement to go along with his indefatigable approach, it will further improve the odds he lands a gig with an NBA team.

One of the most interesting plots of the Orlando Summer League was that the draft’s second overall pick, Victor Oladipo, was going to log major minutes running the show for the Magic. From a developmental standpoint, this was a great call by the Orlando front office. Coming out of Indiana, Oladipo was strictly an attacking wing whose main goal was simply “score.” Being forced to run a team, even for this short stretch, has already forced thought and nuance into the young guard’s approach. Though he played well overall, Oladipo definitely had his fair share of mistakes in his first crack at point guard. Midway through the third quarter against Boston, Oladipo struggled mightily in performing relatively simple tasks like getting the ball across half court, getting his team into the proper set, and making entry passes into the post. The end result for Oladipo was six turnovers against a Celtics team that was rather underwhelming, but in the grand scheme of things, those mistakes were just a down payment for a great learning experience that should continue this whole week.

Myck Kabongo didn’t hear his name called on draft night, but that didn’t stop him from putting on a solid performance against American college basketball darling Trey Burke in Miami’s matchup against Utah in Game 3. The Canadian-born guard (beware, they’re taking over basketball) was certainly a factor in Burke’s struggles, harassing the Michigan star into some bad offensive possessions while also showcasing his own skill set. The 6-foot-1 Kabongo is a fantastic athlete with great explosiveness and lateral quickness, and, at the very least, he has the tools and ability to be a defensive presence at the NBA level. Kabongo’s outside shooting leaves a lot to be desired, but he flashed the ability to break guys down off the dribble while handling a lot of contact on his drives en route to eight free throw attempts. The Heat guard, who still doesn’t have an NBA contract, also directed his teammates into the proper place on a couple of possessions and seems to possess both the intelligence and demeanor to run an offense at the game’s highest level. Though his box score was unremarkable, Kabongo is definitely a player to watch as this week goes on.

After losing my spot along the courtside table, I found myself sitting next to noted college hoops announcer Clark Kellogg for the Game 4 matchup between the Pacers and Thunder. My focus on the game waned when I found out that Kellogg does off-the-court development work for Indiana and was down in Orlando taking in a few games. Naturally, after hearing this, I asked Kellogg about his role in the recent maturation of Lance Stephenson. While he was quick to deflect praise onto others — primarily Larry Bird and Stephenson himself — Kellogg acknowledged that he had a hand in helping the troubled youngster get his life outside of basketball back on track. Stephenson’s contributions were a vital part of Indiana’s run to the Eastern Conference finals this year, but they were made possible by influences we often don’t take into account. Stress from things like friends, family, money, or women can often be the driving force behind a player’s struggles on the court. It was interesting to learn, then, that Indiana puts an emphasis on having people like Kellogg in the organization to help players like Stephenson learn to deal with life as an NBA athlete.

The day’s fifth game was Jason Kidd’s debut as an NBA coach, as he guided the Nets against the Pistons. The two teams boast some of the most intriguing talent in Orlando, but it was the Kidd–Lawrence Frank relationship that stood out more than anything. Late in the game, as the Nets were mounting a comeback, Kidd called timeout to get his young team prepared for a crucial late-game set. What transpired next was rather interesting. Frank, Kidd, and soon-to-be Brooklyn assistant John Welch strode toward the middle of the floor. Kidd watched as Frank, whiteboard in hand, drew up a play and showed the rest of the group. But as they went back into the huddle, it was Kidd that sat down, picked up his own whiteboard and drew up the play. It was a smart move on Kidd’s part because even at Summer League, it’s never smart to show weakness or indecision. Not being able to draw up an appropriate play or doing so with jittery hands can quickly lose the faith of your players. By letting Frank put him in a good spot, Kidd was able to confidently head back into the huddle and use either that play, or another idea off it, to send his team back out on the floor. Kidd has been on record saying that he wanted veteran coaches around in order to ease his transition into the profession, but it was fun to see the dynamic at work in Orlando.