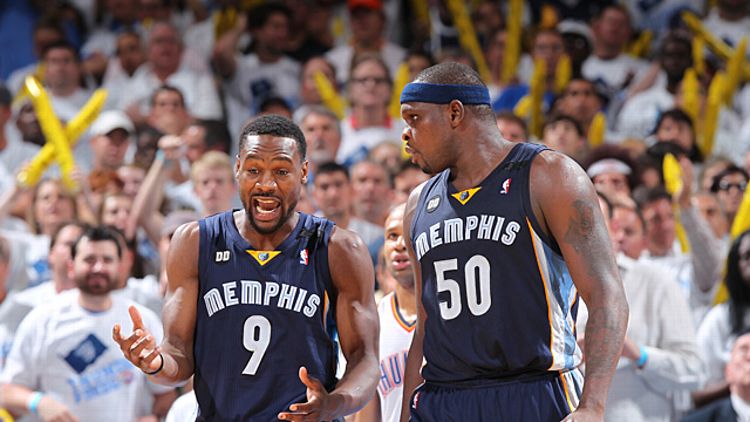 1. The Healing Power of Gatorade

Chris Ryan: This happened right after Zach Randolph’s official postgame interview with one of TNT’s sideline reporters. He was respectful of the Thunder, generous with his time, and praised both Golden State and San Antonio. Then he went over to Tony Allen and they rubbed their foreheads together and they spoke bear to one another and punched each other in the chest. Whatever the Grizzlies lack in the aesthetics department on the court, they more than make up for with their collective personality. This happens in the playoffs a lot. You watch a team enough times and they become three-dimensional; you start to notice all their personality quirks. It’s happening in a big way with the Grizzlies. You just see them talking. ALL. GAME. LONG. No matter what. Talking to themselves, to each other, to the refs, to the opponents, to fans, to hecklers, to no one in particular. They talk when things go right, they talk when things go wrong. And when they aren’t talking their facial expressions are doing the talking for them …

Pretty soon, we’re all going to be speaking bear.

Andrew Sharp: God only knows what happened during Wade’s trip back to the locker room in the third quarter — more magical knee tape, German doctors, Haitian voodoo sacrifices, a rubdown from DJ Khaled — but whatever it was worked.

Danny Chau: Between the third and fourth quarter of Game 5, Dwyane Wade went back to the locker room to re-tape his right knee, which has been bothering him for the better part of forever. Wade, who had a very pedestrian game up to that point, suddenly looked like a brand-new man in the fourth. He went 3-for-3 in the quarter, and each play fully tested the structural integrity of that knee. He pulled off slinking crossovers and step-backs that led to a couple runners. Then there was the incredible sequence with 3:22 remaining in the game in which Wade blocked a Jimmy Butler jumper, then perfectly timed a putback dunk on the other end 20 seconds later.

After the game Craig Sager, voice of the people, tried to get Wade to explain how on earth any of that just happened.

So, I looked it up, and Wade is correct. Tape does a lot of things. Duct tape can be used to treat warts (though the Wikipedia page for duct tape occlusion therapy isn’t exactly a ringing endorsement). Packaging tape is good for trapping pesky flying insects or crickets. I’ve used tape as an improvisational chip clip and as a temporary tent repair after the time a squirrel tore into my secondary tent hungry for sliced bread and Wheat Thins. I don’t think this is what Wade meant.

Wade’s reluctant answer should raise some eyebrows. The simple act of using elastic tape on the compromised area doesn’t exactly explain his sudden explosion. Theory: I suspect deer antler velvet is in play here — there was surely plenty to harvest after the Heat decapitated the Bucks in the first round. But why wait to process the velvet into a spray when you can directly apply it as a patch with tape? If Bango the Buck shows up next season without antlers, I think we’ll have found our answer.

Brett Koremenos: Dwyane Wade’s uncertain health has been a dark cloud hanging over the sunny shores of South Beach since the start of the playoffs, so it was a good sign for the team to see their star guard looking like his old self in the fourth quarter of last night’s closeout game against the Bulls. It was almost an unnecessary development, however, given the recent explosion of his unheralded backcourt counterpart, Norris Cole.

With the way he has played this postseason, the second-year guard is proving to be a legitimate playmaker who can help lift the perimeter burden of LeBron James, should Wade be unfit to do so. Cole is showing more and more he can be counted on to not only knock down shots, but be a second creator off the dribble, whether it be off a James kickout pass or in a pick-and-roll — like the one that led to Cole’s thunderous dunk late in the fourth quarter. The young guard is obviously nowhere near as potent as a healthy Wade, but he can certainly be a force against an opposing defense designed to stop James.

Sharp: Whenever they put Craig Sager in the Basketball Hall of Fame, his exhibit should be a walk-in closet full of his suits, and the plaque should just be that GIF.

Koremenos: The man who will be receiving the brunt of the criticism for the Thunder’s earlier-than-expected end to their playoff run will no doubt be Brooks. But while the Oklahoma City head coach certainly deserves a fair share of it for his game management and rotations, he should be cut some slack for the team’s offensive woes in the absence of Russell Westbrook.

It is incredibly hard for a coach to adjust to the loss of such an integral part of his team’s success at such a crucial junction of the season. Brooks had only two weeks to reconfigure his offense to account for the loss of a superstar-caliber player who had not missed a game for five years. And Brooks was forced to do so while playing some of the best teams in the Western Conference. There are plenty of things to be extremely critical about given Brooks’s performance this postseason, but an inconsistent offensive system in the absence of Westbrook isn’t one of them.

Roster Doctor: Let's Do a Twitter-bag

A Tale of Two Offenses: The Spurs Get Back to Business and the Knicks File for Bankruptcy