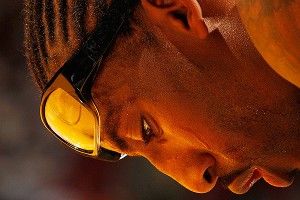 ‘Break in Case of Emergency (But Not With Your Fist) (And Being Down 2-0 Is Not, Technically, an Emergency, FYI)’ Moment of the Night

Partially due to frustration and partially due to the too-tight prison-bar cornrows atop his head, after a Game 2 loss Knicks power forward Amar’e Stoudemire punched a glass fire extinguisher door, lacerating his hand. He was later seen leaving the arena in a sling.

C’mon, Amar’e. You can’t just go punching glass and think things will be better. We’ve been over this. It’s like you’ve forgotten what Diddy said about hard times:

“You can’t just choke all your problems away. It takes hard work. If I had my way, I’d never work. I’d just stay home all day, watch Scarface 50 times, eat a turkey sandwich, and have sex all fucking day. Then I’d dress up like a clown, and surprise kids at schools. Then I’d take a dump in the back of a movie theater, and just wait — until somebody sat in it. Hear it squish. That’s funny to me. Then I’d paint, and read, and play violin. I’d climb the mountains, and sing the songs that I like to sing. But I don’t got that kinda time.”

The King Joffrey Award of the Night: Dwyane Wade

Oh hey, while we’ve all been busy ogling Kevin Durant’s quick release and backpacks and LeBron’s fourth-quarter yips and Kobe’s German-engineered knee, Dwyane Wade turned into a super villain. I guess we only have ourselves to blame. There he was after the game Monday night, pink bandage on his dislocated finger to match his pink tie, talking about this incident from Monday night:

“That was, I don’t know. I’ve never done that before but it was fun. I love messing with Bib.” Hahaha! Well by all means, your personal amusement comes first, buddy! Backs slowly away from Dwyane Wade and immediately hides anything he doesn’t want destroyed or thrown like … cats and antique portraits of family members. —Chris Ryan

In trying to explain how Baron Davis has quietly been one of the few bright spots for the Knicks — he’s averaging 11 points (on 64 percent shooting) and four assists in 22 minutes a game — we’re forced to crib from baseball terminology. He’s got excellent off-speed stuff. The Heat defense, like a slugger acclimated to pummeling 95-mph bullets, has struggled to time its swing to Baron’s Moyer-esque delivery. Attuned to playing against blurry dervishes like Derrick Rose and Rajon Rondo, their fast-twitch reflexes snap them out of position when he rumbles lethargically down the lane, leaving Chandler and Stoudemire unmolested beneath the basket for easy dunks. Sadly, Baron’s vertebrae fuse together into a big, gluey knot several times a game, leaving the Knicks’ bullpen in the hands of Mike Bibby. —Ben Detrick

In-Studio Commentary Moment of the Night

Kenny Smith on Stoudemire punching the glass casing around a fire extinguisher: “Now Carmelo, Mike Bibby, and the rest of those guys can say, ‘Well, I’ve been on a team where a guy done a dumb thing.'” I just have the strangest feeling that Carmelo and Bibby have been on teams where guys have done dumb things before. But hey, I’m a dreamer. Everyone says that about me. —Ryan

As a Beard Owner of America (proud member since 2006), it should be known that James Harden is the default owner of this title. Monday night, though, there was something special afoot.

Up one, 15 seconds left, at the stripe, in HD, there was little doubt that the man with the impeccable face-suit was going to force Dallas to put up a 3 for the tie. There’s nothing new about Harden’s facial-hair prowess, but even coming to the line 2-for-7 in the playoffs, the glisten of that majestic brush was plenty reassuring. If I’m Dallas, with the series coming home, I find a ninja barber to face-Sampson him in his sleep. It’s the only way. —Robert Mays

They say you never forget your first GIF. Mine was Van Damme dancing, and I’ve repeatedly said that nothing will ever top that. Monday night, however, everything changed. Knower of things Chris Ryan, riddle me this: Is Chris Bosh’s performance the greatest thing that has ever happened ever? Are you suddenly rooting for the Heat to win it all? Do you think Chris Bosh wears a fanny pack around the house? Am I in his RSS feed? Feel free to tackle all/some/none of these questions. —Rem

Rem, if Dwyane Wade is basically Damien from The Omen and LeBron is too busy trying on 13 headbands at once and running around like Natalie Portman in Black Swan every time Tyson Chandler gives him a love tap … then, yes, by Jove, Chris Bosh is suddenly, against all odds, becoming likable. —Ryan

Of my NBA stances, few are harder to justify than my role as Derrick Rose fanboy and Russell Westbrook hater. Both are among the two most explosive players in basketball. Both get to the rim with no regard for their own well-being. And both take an unfortunate amount of terrible jump shots. If I’d grown up 40 miles from Oklahoma City instead of Chicago, it would probably be Rose who had me screaming at a television every time he pulled up from 18.

As long as Durant is on the roster, it will be easy to throw the blame onto Westbrook when things go wrong, but for the Thunder to win a title, they’re going to need the points sprung from his sometimes-inflated sense of self. Doesn’t mean I hate him any less.
—Mays