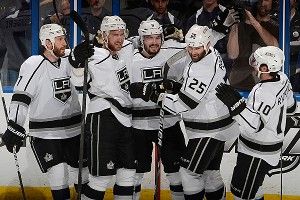 The Los Angeles Kings are an 8-seed in this year’s NHL playoffs.

And they are better than you think.

The Kings, who dispatched the defending Western Conference Champions in the first round of the playoffs, are one of those teams whose true level of ability transcends their modest regular-season showing. In fact, at this point, I’d argue that the Kings are one of the strongest clubs chasing the Cup.

Why is this? Well, primarily, it’s because Los Angeles is one of the league’s best puck-possession teams. Detroit coach Mike Babcock is fond of saying things like “possession is everything,” and while that’s hyperbole (and doesn’t always result in a series win), it is true that teams who have the puck more in the offensive zone tend to win more, too.

The Kings were a decent puck-possession team under former coach Terry Murray and then interim coach John Stevens. Under their combined watch, 51.7 percent of shots and missed shots taken at even strength were taken by the Kings, suggesting that the team was slightly better than its opposition at taking shots and having possession of the puck. With just a 15-14-4 record, though, that slight edge wasn’t doing the team enough good, and so the Kings went out and hired Darryl Sutter.

Sutter, an excellent NHL coach for better than a decade, had spent his last five years in management in Calgary. Yet he immediately showed that those years away from coaching hadn’t dulled his feel for bench management. Not only has Sutter been aggressive in seeking the matchups he wants, but he has also drastically shifted the role some players play. For example:

Sutter kept making tweaks as the Kings attempted to push their way into the postseason. And those changes worked. The Kings had been outshooting their opponents by two shots per game at even strength before; that number jumped closer to five under Sutter. Gradually, under Sutter, the team’s record improved; by the end of the season, the Kings held a rather comfortable lead on ninth-place Calgary.

Even so, the Kings’ record didn’t properly reflect how well they were doing.

The team’s performance under Murray distorted its record. And the acquisition of Carter didn’t happen until just before the trade deadline. But a major contributor was the club’s record in one-goal games.

Many teams that win a lot of one-goal games go on to experience heartbreak in the playoffs. But the reverse is also true: Teams that lose a lot of one-goal games don’t usually make the postseason, but when they do, they’re typically better than their overall record would indicate. It might seem counterintuitive — particularly given how frequently commentators talk about players elevating their games in critical situations — but history shows us that this is the case.

While some teams are legitimately built to win close games — in five of the last six seasons, for example, New Jersey has finished either first or second in the league in one-goal game winning percentage — for the most part, a team’s record in those situations varies wildly.

The Kings are a good example of a team that has just seen some bad bounces this year. In 2010-11, they boasted the league’s fourth-best record in one-goal games. In 2011-12, they had the league’s fourth-worst record in those situations. With a few bounces the other way last season, the Kings could easily have missed the playoffs. With a few bounces the other way this season, they likely would have won their division.

So, despite being the league’s fourth-best possession team — and better at it under Sutter than under Murray — the Kings found themselves entering the playoffs as heavy underdogs to Vancouver. They made short work of the Canucks, even though Mike Richards and Carter never really found the range offensively. They now find themselves the second-best puck-possession team still alive in these playoffs.

Unfortunately for the Kings, their opponent in the second round is the St. Louis Blues, the NHL’s best puck-possession team in the regular season. Arguably, the two are the best teams still alive in the postseason.

The Kings took Game 1 of the Western Conference semifinal series 3-1, and then beat the Blues again Monday night. They are far better than a typical 8-seed. And if they can get by St. Louis, they might be the team most likely to win the Stanley Cup.