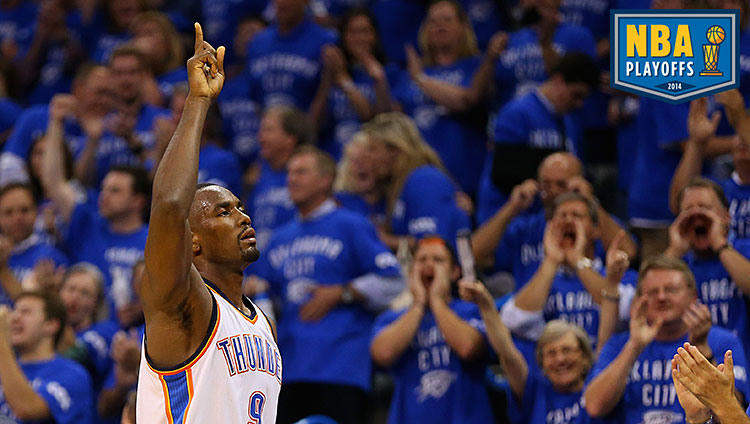 A look at the weekend’s conference finals action.

Serge Ibaka was done. Kaput. Out for the playoffs. He suffered a calf strain at the end of the Clippers series, and, ever the heart-on-his-sleeve exec, Sam Presti said he couldn’t risk Ibaka’s future for the Thunder’s present. Time to put him on ice and save him for next season. That was, until Dr. Donnie put his magical hands on him. Ibaka played, scored 15 points in 30 minutes, and ruined Tony Parker’s night. It was a miracle. And for the Spurs, it proved the old joke: Just because you’re paranoid, that doesn’t mean they’re not out to get you.

Ever since it was announced that Ibaka would miss the remainder of the playoffs, members of the Spurs — Pop and Parker, mostly — seemed skeptical. I don’t know what to think of all this. It’s either the Thunder engaging in some Patriots-esque shenanigans, or it’s a peek into the wild world of the OKC med staff.

As the excellent Oklahoman beat man Darnell Mayberry pointed out the other day, there’s some history of the Thunder med staff (under the direction of Strackmaster Flash) getting things wrong. Tyson Chandler’s failed medical, anyone? Russell Westbrook’s multiple knee surgeries? I cannot claim to be an expert in the minutiae of calf strains, but it would seem to me that a guy either has a season-ending injury or he doesn’t.

Who knows? Maybe the Thunder run their med department the same way Westbrook runs their offense. Whatever they did — by hook or by crook or by horse placenta — they got Ibaka back out there. I don’t know whether it will swing the series, but it gave us our first truly great Gregg Popovich moment:

So, thank you for that, Donnie.

Ryan: This is awesome for two reasons. One, Caron Butler definitely was playing in the NBA when the telephone was invented, and two, I have never seen someone as excited to be in on the ground floor of a meme as the moment when Hasheem Thabeet called shotgun for CARON BUTLER PHONE HOME. 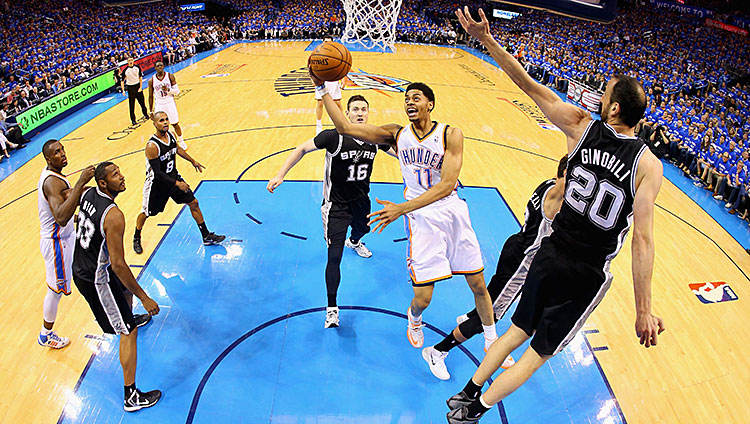 Danny Chau: Sunday was a joyous day for the three James Harden trade apologists left on this faithless planet. For months, I’ve taken on the thankless role of necromancer, futilely reviving the same damn battered horse, only to see it die all over again. Can you imagine the emotional toll? It was an important game for me. Let me have this.

Game 3 has already drawn parallels to the pivotal Game 3 of the 2012 conference finals, but instead of Harden providing a first-half spark, it was Jeremy Lamb and Steven Adams, the two direct descendants of the one-sided deal. Instead of Thabo Sefolosha going off for the unlikeliest of 16-point second-half explosions, he was slapped with a DNP-CD. Serge Ibaka was the prevailing miracle, but Scott Brooks also kept his faith in his young guns, and they brought just as much as they needed to. It was all the validation necessary for someone who has stayed true all season. So run free, wounded horse. No one can touch you this Memorial Day.

netw3rk: By the conference finals, season-long narratives have settled into kind of sedimentary layers of accepted truths and acknowledged weaknesses: Scott Brooks’s tactical acumen; the Spurs’ carefully crafted symmetry being susceptible to OKC’s fast-twitch chaos; Indy’s turnover addiction; the Heat having to pick their spots, after four consecutive seasons of deep playoff runs.

Each team tries to exploit the flaws in the other team’s schemes and personnel, like a fighter working an opponent’s cut. And the two Game 3s from this weekend offered prime examples.

In January, when the rumbles of Indiana’s swoon had just begun to gather, Larry Bird, like the voice of God booming from a burning cornfield, warned his team about its profligacy with the ball. “Turnovers,” said Bird, discussing what the team needed to improve. “Turnovers will be their downfall. If they go down this year, it will be because they turn the ball over too much.”

Fast-forward four months. In Game 3, the Pacers squandered a 15-point lead, behind 19 turnovers leading to 26 Heat points. This including a momentum-strangling five in a row as Miami cranked up its defense to attack-dog level to close out the first half. Bird probably was, and perhaps is currently, making the face your dad made when he picked you up from the principal’s office.

The Thunder have proved over the past two seasons that the Spurs’ carefully crafted rotations can break down under pressure from elite athleticism. Aaaaaaaand then Serge Ibaka got hurt. Supposedly for the playoffs, though that was either a lie, medical incompetence, or he had copious amounts of incredibly addictive painkilling agents injected into his leg/has a mutant healing factor, because he played in Game 3 and knocked the Spurs off their egalitarian equilibrium.

Ibaka provided a nigh-impermeable human barrier to the paint, blocking four shots and altering who-even-knows-how-many more. This in turn reduced the Spurs’ offense into one based on jump shots, which then limited their free throw attempts (16 to the Thunder’s 31).

Chau: Is this ongoing LeBron James–Lance Stephenson saga the NBA player rivalry we deserve? Was the specter of LeBron and Kevin Durant jostling for supremacy in a Magic-Bird allegory too convenient? Maybe the thorn in LeBron’s side was always going to be a player you could imagine as his brash, rage-filled younger brother. What could get under LeBron James’s skin more than looking at a distorted mirror image of himself?

Stephenson pushes the Pacers over the edge. He is also the edge itself. He is their all-time wild card, but he’s also arguably been the most consistent force for the Pacers since the end of the semifinals against the Wizards.

Does his status as the latter negate the former? He’s back to taunting LeBron, but unlike when he flashed the choke sign two years ago, he’s now finally in a position to back up his behavior. Stephenson has played at least 40 minutes in each contest since Game 7 against the Wizards, and the number has risen in every game. He played all but two and a half minutes Saturday. Stephenson says he’s pinpointed a weakness, but a lackluster Game 3 doesn’t inspire much confidence that the Pacers will be able to exploit it, if it exists in the first place. Kudos to Lance for keeping the drama afloat, but how much more can Stephenson prod before he becomes a dull knife in a gunfight?

D-Wade Always Gets the Last Laugh

Andrew Sharp: You can hate his game. You can laugh at the horrendous fashion. You can mock his ongoing attempt to break the Guinness World Record for pump fakes. You can wonder how he became so unlikable over the past few years, because he used to be one of the two or three most enjoyable stars in the NBA. But you can’t say Dwyane Wade doesn’t turn it on when all this starts to matter.

We’ve had this conversation before, and now here we are again. It’s an annual tradition at this point.

No matter how gimpy he looked at the end of the regular season, no matter how many people wonder if LeBron would have to do it alone, Wade’s there in the conference finals, twisting the knife while the Heat end seasons. Saturday included two 3s to break the game wide open — one at the end of the third, one at the start of the fourth. His second-half numbers for the series: 6-for-9, 14 points (Game 1); 5-for-7, 10 points, four assists (Game 2); 6-for-10, 15 points (Game 3).

That GIF up top — this play — is from the regular season, but it’s the only recap you need for this series.