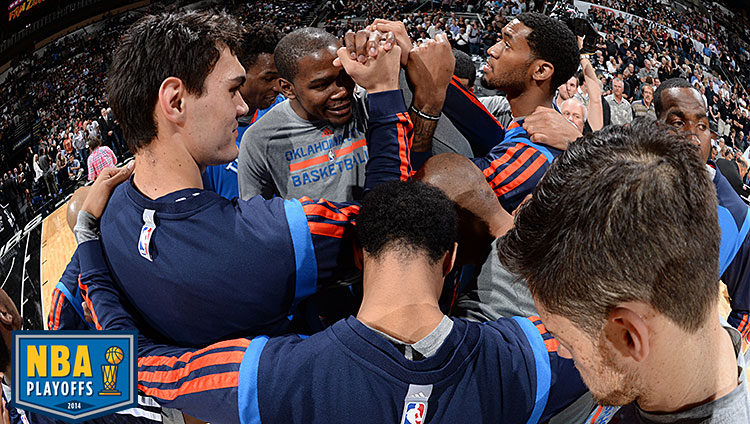 There may not be a single team in the NBA that’s more fun to talk about than the Oklahoma City Thunder. Because Kevin Durant is one of the greatest scorers of all time. Because Russell Westbrook is a radioactive point guard who’s hazardous to himself and everyone else at all times. Because Scott Brooks makes it all a little more complicated by refusing to run those two on 35 pick-and-rolls every game.

And that’s all before you go back to the Harden trade, which sort of undid a dynasty — and which is its own soap opera that never ends — or the Durant free agency in 2016 that could undo it for real. There’s real drama in all this, and almost every time the Thunder lose a playoff game, it bubbles to the surface. I do it just like everyone else.

Is Russ too aggressive?

These are the questions that make it fun to talk about basketball. The imperfections are what make OKC awesome. It’s so much more fun than talking about the Spurs’ immaculate back screens.

So, I get it. Fixing OKC is a national pastime.

But let’s not do this next week. That’s our last-minute plea before the playoffs go any further. Every time someone starts to ask whether Westbrook and Durant can coexist, just change the subject and talk about this GIF instead:

The Russell Westbrook face is the best part, but all of it is out of control, and then Lil B shows up at the end to make it perfect. It’s more entertaining than the first two games of this Spurs series. So, yeah, talk about the GIF instead of Russ vs. KD, and remember that this was never really a fair fight to begin with.

Once Serge Ibaka went down, this series was pretty much over. Now there’s at least a chance that Ibaka will come back to play sometime before it’s over, but down two games already, would a hobbling version of Serge even change that much? Don’t get me wrong, I’d kill to see the Thunder rise from the dead here. To see Kevin Durant and Russell Westbrook go supernatural, tie this series at two, and then have Ibaka come back for a final three-game war for the West. It would be phenomenal.

It’s also probably not happening. I accepted that sometime during Game 2. The Thunder just don’t have a single lineup that works against the Spurs here. Either they’re giving up too much size on defense, or they put in the size and nobody on the court can score besides Westbrook and Durant. It’s like watching a basketball team drown.

I mention that only because the Clippers had the exact same problem when they were going down against the Thunder a week ago. The combination of Kendrick Perkins, Steven Adams, and Ibaka destroyed them inside, Westbrook and Durant traded off kill shots from the perimeter, and eventually L.A. just got overwhelmed. The same thing happened to the Grizzlies as that series unfolded.

This exact team owned the Spurs for most of the past three seasons. Before this series, they were 10-2 against San Antonio dating back to Game 3 of the 2012 Western Conference finals. That’s not to say this series would’ve been a blowout with Ibaka — it still probably goes seven games even if he plays, and it’s pretty much a toss-up — but there wouldn’t be 30-point blowouts where the only notable video from the second half is Westbrook yelling at Durant in slow motion.

Because that’s what happens when you’re getting blown out. Everyone looks worse, everyone gets sloppy. Everyone’s upset.

Keep that in mind over the next week or so. I love Charles Barkley like a family member, but I can’t deal with another round of “Russell Westbrook isn’t a point guard” conversations after Russ spent three weeks destroying Memphis and the Clippers.

It’s not even that Barkley’s wrong. This might not work long term. I’ve always had a feeling Westbrook and Durant will end up separated, and only then will we realize how amazing it was that they were ever together.

But right now, let’s just skip all those conversations. This team was throttling people before Ibaka got hurt. Everything was coming together, and we were seeing the first version of a Thunder team that could win a title without Harden. Better than what we got last year. Ibaka and especially Reggie Jackson are worlds better, Steven Adams is a madman off the bench, Westbrook is playing the best basketball of his life, and even Durant somehow took it up a notch this year. I called them an endless tidal wave of awesome exactly a week ago.

Now, the Thunder will probably get blown off the court again in the next few days. And sure, this may not work out in the long run. Russ and KD will probably end up in different places one day. But let’s see what happens when they’re all healthy before anybody freaks out too much. Because that tidal wave was too awesome to ruin after 10 days of misery.

(Note: Not totally giving up on this series yet.)

(Maybe this whole column was an elaborate Spurs jinx.)