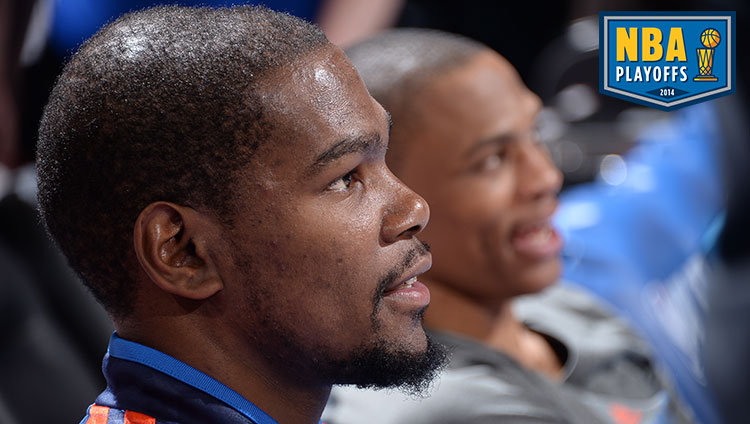 What Did You Expect?

The only thing that wasn’t weird about last night’s series-clinching Thunder win was Kevin Durant. He scored 39 and grabbed 16 boards. He was normal.

I definitely think the Clippers were tired, I’m sure playing at home had a weird heaviness for them after all they’ve been through, and they wouldn’t be human if they didn’t feel like they had the chance to win this series taken away from them by Game 5’s referees. But at the end of the night, at the end of the season, they just ran up against a 6-foot-10 god of war who put up a third quarter they should teach in colleges. Perfect from the field, perfect from the line, perfect from behind the arc, perfect at destroying Matt Barnes, perfect at sucking the life out of Staples Center. He didn’t win the MVP because people got bored of giving it to LeBron. He won it because he can do what he did last night. 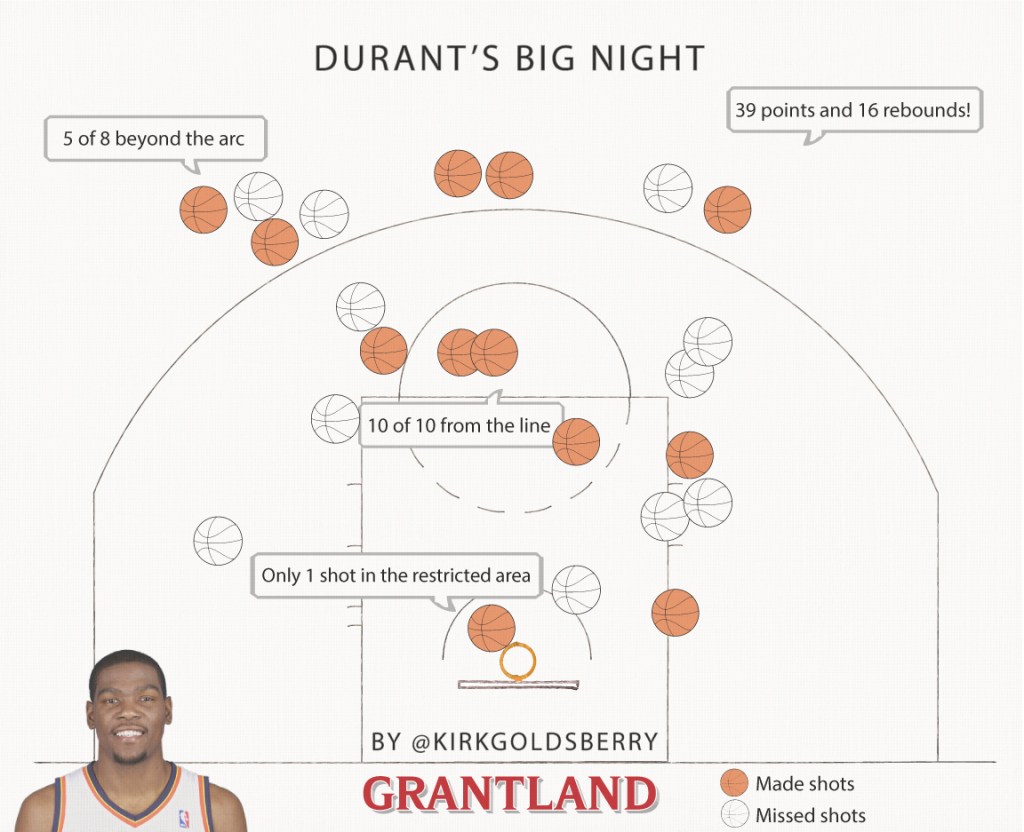 The Clippers Aren’t Winning the West 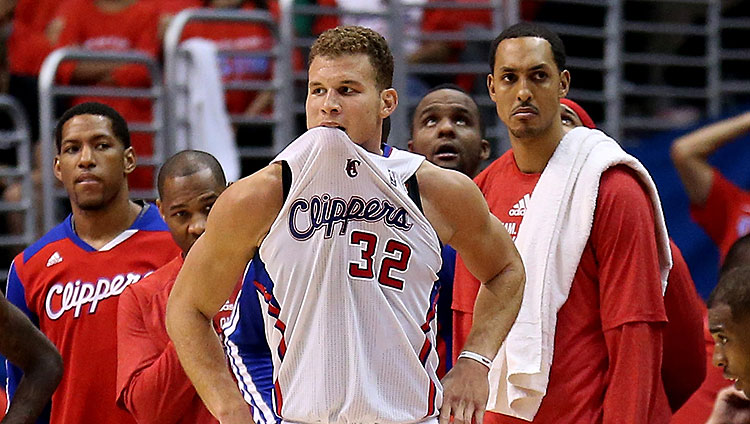 Andrew Sharp: A few months ago I was convinced. Blake Griffin looked like the third-best player in the league, Chris Paul was healthy again, and the Clippers were about to shock everyone and win the West. I started bombarding Chris Ryan with daily Gchats about this, I bet on it, experimented with hashtag activism, everything. But even against the Warriors, it became obvious that if the dream were to come true, it would take some miracles.

The Clippers got the opposite of miracles. Not necessarily the Donald Sterling mess — although that counts, somehow — but definitely that collapse in Game 5. So when the Thunder came back from being down 16 to take a fourth-quarter lead, it wasn’t that surprising to see the Clippers looking shell-shocked for the rest of the game. Guys giving up open looks on defense, freaking out over fouls, somehow pressing but also passing up open jumpers. This is what it looks like when teams fall apart.

The whole argument for picking the Clippers to win the West assumed that (1) the Spurs wouldn’t stay healthy, and (2) Scott Brooks wasn’t going to be able to make it work with Russ and Kevin Durant. Both of those assumptions look stupid now, but especially the OKC one. That one was true for exactly one quarter in this series (end of Game 4), but everything else was perfect. Even when Russ had an off game last night, he managed to stay patient, feed KD, and it all worked.

There will be people who put this series on CP3 or Blake — or Sterling, or Doc Rivers, or the refs — and I started to do all that when it was over last night. It makes sense, because who knows how this plays out if they don’t give away Game 5.

But I don’t know. That dazed fourth quarter for the Clippers was only natural after everything they’ve been through. And no, not the Sterling stuff. I’m talking about the Thunder. The best series of Russell Westbrook’s life, the best player in basketball this year, guys like Steven Adams and Serge Ibaka torturing Blake and DeAndre, Reggie Jackson off the bench, even Nick Collison coming out of nowhere. Physically or emotionally, it’s gotta be exhausting to deal with an endless tidal wave of awesome.

The Clippers aren’t winning the West because they needed a little luck and never got it. Instead, they got this Thunder team. Everything broke down for the Clippers last night at the end, sure. But after the past two weeks, it feels like six games against OKC might break anyone.

netw3rk: There are players who set the table for other players and then there’s Nick Collison. He actually is the table. Collison is simultaneously innocuous and extremely helpful. He sets screens, runs hard, plays defense, sees cuts, and moves the ball. He has an understanding of the way a basketball game flows. He also has an exquisitely detailed knowledge of exactly what he can and cannot do.

His 3.6 win share this season is the best mark in the NBA for players who play less than 18 minutes a game. Collison had four points, two rebounds, two assists, one steal, and one block in nearly 17 minutes after sitting for the entire first half. Perk foul woes and an injury to Serge Ibaka with 7:24 left in the third quarter sprung Collison from the bench, and he proceeded to do all those minuscule things that make winning a basketball game just a little bit easier, some of them visible on the stat sheet, some not.

One that was visible: After the Thunder sanded down an 11-point Clippers lead to three with seven seconds left in the third quarter, Westbrook (who, the joke goes, never passes in these situations) found, of all people, Nick Collison in the corner for 3. Splash, tie game, momentum switched. The Thunder would pull away in the fourth. Collison had taken all of 17 3s this season, and made four of them. It was like your dog randomly making you breakfast in bed.

Regressing to the Mean

Danny Chau: The game ball went to David West, he of 29 points on 50 percent shooting for the game. He was 10-for-14 from midrange, killing them softly with each feathery jumper from the foul line extended. In 20 second-half minutes, West scored 18 points — nearly half the Pacers’ total second-half output — tormenting the Wizards in ways you might imagine David West tormenting a team. It was the David West we knew before the grand ah-WHOOM descended upon the entire Pacers organization — tornadoes in the sky (you try coming up with a better explanation) swallowing whole what could’ve been a historic season.

West’s postgame interview with Doris Burke was fantastic, and not just because West is an assertive, confident speaker. To start the interview, Burke mentions a particularly heartfelt celebration after the final buzzer between David West and Pacers media relations director David Benner. Fitting, as West drops a PR bomb only seconds later by acknowledging the “internal turmoil” the team has been facing. It was vague, but direct, as West tends to be. There was no sidestepping, primarily because he wasn’t goaded into bringing it up. We’ll never know if Benner popped a blood vessel after receiving word of this, but I hope he didn’t. Because this could actually be the best thing for the Pacers’ media relations.

Admitting it is the first step, right? And with the Pacers back to where they were always supposed to be, can it all (whatever it is) be subsumed under a larger narrative? An acknowledgment of the trauma the team has faced may have been a short-term gaffe, but the bloodletting sets a foundation for potential healing.

The Pacers’ season has been so confounding, I’ve come close to turning to Scientology for answers, and in no way has that been fun. In West’s comments, I see a light at the end of the tunnel. They’ve owned up to the trauma. Now they can try to put an end to being defined by it.