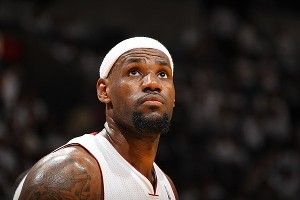 I have been to Miami maybe 10 times in my life and found it to be many things: intoxicating, vapid, beautiful, shallow, the opposite of sober. But one thing it’s never been is cynical. Or sharp. Or snarky. Which is why I have watched the “GOOD JOB, GOOD EFFORT” video 391 times since Tuesday night. Because I can’t believe the kid is being sincere with that sentiment. Tuesday night’s Heat performance was not a “good job” and it was most certainly NOT a “good effort.” I know this because I performed a very scientific study (i.e., scanned YouTube for five minutes) of the 10 hustle/effort plays that could have gone either way in the game, and my conclusion is the Celts won Every. Single. One. What possible explanation can anyone come up with for the older, slower, much much MUCH less athletic team getting the best result on all of the “50/50” plays if not effort? (Other than performance-enhancing drugs, of course, which is a joke I’m not allowed to make on this website. #simmonsreasons.) I’m not ready to declare the team with two of the top eight players in the league cooked just yet, but I would strongly recommend that Coach Spo direct the Heat charter flight to make a stopover in Oz on the way to Beantown to get this Tin Man team of his some freaking heart.
— Joe House

There wasn’t a single dunk Tuesday night as impressive as this Wade layup. Splitting three defenders, bringing the ball all the way down to his hips and back up again, hitting the shot, off-balance. God his drained knee.
—Ryan

Paul Pierce was 5-for-18 when he took this shot.

I thought it was going in.

So did every Celtics fan.

(That’s everything you ever needed to know about the Paul Pierce era.)
— Bill Simmons

The sequence of events I’m sure you’ve seen 100 times by now, but it’s easy to miss one crucial aspect of the exchange that was:

Yes, the Rondo tip was impressive because he tapped it directly to the open man, but arguably more astounding is that he did all of this over LeBron James. I just assumed it was Chalmers who got jumped over, because that would be very Chalmersian of him, but it wasn’t. It was LeBron behaving Chalmersian.

This guy Rondo is a legend in his own time. He’s unreal, less in the sense that he’s amazing and more literally in that “he isn’t real.” Like he’s a hologram or a mirage or a fantasy creature that easily gets triple-doubles. Wow.
—Rembert Browne

Because LeBron Might Have Some Reading Time on His Hands …

All right, LeBron, you’ve already shown a penchant for the Hunger Games trilogy, and apparently you’re reading for pleasure for the first time since high school. Don’t stop now. Given your predilection for dystopian young adult fiction that grown-ups love to claim is “legitimately great,” I think you should visit your local library to check out The Giver by Lois Lowry. Spoiler alert: It gets a little brutal. The main kid is forced to choose between staying with the status quo in his hometown where he is the chosen one, or leaving, foisting change upon them. Kind of familiar, right? I think you’ll like it, and maybe it’ll inspire you tomorrow night.
— Juliet Litman

During Tuesday night’s game, announcer Jeff Van Gundy griped about the overuse of the term “Big Three.” Instead of harping on unoriginality — fully expected in an era when CP3, D-Wade, and A-Rod are considered “nicknames” — he wondered if the top three players on any team are now automatically a “Big Three.” In Charlotte, Van Gundy mused, would that be D.J. Augustine and two other mooks?

The trio is today’s predominant team-building philosophy, replacing the tandem attacks of Jordan/Pippen and Kobe/Shaq. The Heat, Lakers, Knicks, and Spurs are all configured this way: three superstars surrounded by role players, youngsters, and a couple journeymen. But the limitations of the salary cap make this a fragile system. The Heat have no front court; the Knicks lacked capable guards until Jeremy Lin appeared in a plume of fairy dust; the Lakers had the athleticism of an elderly couple enjoying an afternoon of antiquing.

While the Celtics had the original Big Three, they’ve always been a traditional (if now undersize) team with a distributing PG, scoring swingman, 3-point specialist, and post-presence. And the ascension of the Thunder has justifiably been attributed to James Harden’s emergence, but they’re also enjoying the luxury of having critical contributors on early contracts. Harden, Russell Westbrook, and Serge Ibaka earn around $10 million combined. Add Kendrick Perkins, and four of the Thunder’s five best players make less together than Amar’e Stoudemire and his stunning vest collection. We shouldn’t grumble that “Big Three” is overused — we should complain that it’s inaccurate.
— Ben Detrick

The Battle of Bosh

A woman died in Chris Bosh’s home on Monday. A masseuse, to be specific. No foul play suspected. No police trouble. Just a corpse in his residence. The simultaneously underrated and overpaid third wheel of the Heat’s Big Three is having a trying few weeks, to say the least. Tuesday night didn’t help. Don’t look at the box score. It lies. In 14 minutes of play, Bosh scored nine points and hauled in seven rebounds. Sounds pretty good. He also treated defense like an optional summer elective. Bosh hadn’t played to this point in the Eastern Conference finals, thanks to a strained abdomen suffered last series against the Indiana Pacers. And, in absentia, his praises have been sung to the rafters. A key to floor spacing; a threat from 15 feet; another long wingspan to throw at Brandon Bass and KG in the lane. All of these things are true. But not when he can’t go. And he couldn’t go Tuesday night — it took Erik Spoelstra just 14 minutes to see that. Game 6 of this series will probably be the most vicious public slaughter since the Battle of Blackwater, and the Heat will need Bosh to survive the wildfire blazing in Boston.
— Sean Fennessey

The Return of the Big Ticket

Tuesday night will likely be the game touted as Kevin Garnett’s best of these playoffs, and that claim is not unfounded. I mean, KG had 26 points. He had 11 rebounds. His two free throws with 8 seconds left were game-clinching monsters. The flush late in the third quarter looked like something straight out of 2002, and is almost certain to give James Jones nightmares. In a lot of ways, the Big Ticket came up biggest when Boston needed him to. In others, Game 5 was just another night. Kevin Garnett isn’t the guy who won that MVP in 2003-04. Still, he — and not Rajon Rondo (or anyone else) — remains the most important Celtic.

More than 26 or 11, the number that stands out from Garnett’s box score line Tuesday night is 2. That’s exactly how many blocks Garnett tallied, both coming off LeBron James attempts. At 36, the offense comes and goes for KG. There are games where he’s not rolling as hard to the rim, or that 20-footer isn’t falling. The constant, especially since the move to center earlier this season, is his presence at the center of Boston’s defense.

In Game 4, the Heat attempted five shots in the paint in the fourth quarter and overtime combined. It was Garnett whose double team forced James to get the ball to Udonis Haslem, and Garnett who still managed to close out on the shot. Tuesday night wasn’t much different. With Garnett in the game, every shot at the rim is contested. There are times where Dwyane Wade and James are scoring, and that’s that, but when Garnett is involved, not much comes easy. Miami is shooting 20 percent better from the field when Garnett goes to the bench.

When Garnett got to Boston in 2007, the consensus was that Boston’s attitude changed defensively. Garnett brought a nasty streak that ignited something in Paul Pierce and just about everyone else. The attitude is still apparent. Following the first of those two blocks on LeBron, Garnett moved to the offensive end, and after getting a hoop and the foul, the spit flew from his mouth as he m-f’ed no one in particular. But to say that at even this point in his career Garnett’s impact is primarily an emotional one would be a disservice to the performance he’s putting together in these Eastern Conference finals. To watch Garnett anchor a defense is still to watch the best. Over the past 17 years, he has proven that he belongs in conversations with some of the best defenders of all time, and right now, he’s just doing it again.
— Robert Mays

What Adjustments Do the Spurs Need to Make?