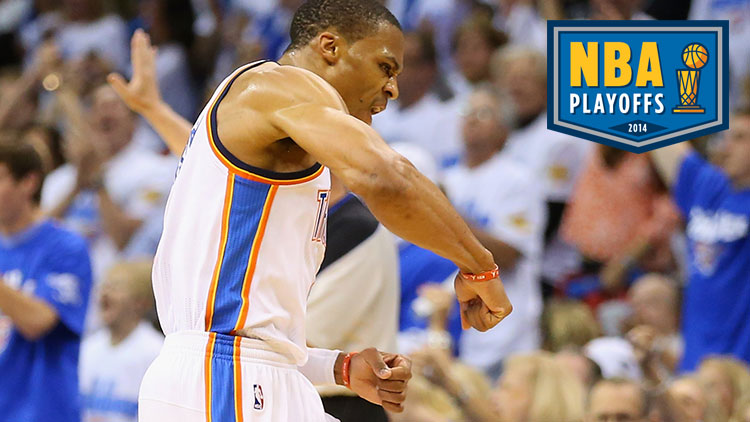 May 28, 2014
by Danny Chau, Andrew Sharp and Jason Concepcion

Andrew Sharp: Everyone remembers the Thunder came back from 0-2 against the Spurs in the conference finals a few years ago, but in 2012, they lost the first two games of that series by a combined 12 points. This year, the difference was 52. Serge Ibaka was out for the year, KD and Russ were struggling, the Spurs were suffocating. The series was DONE.

And now it’s not.

Let’s start with Russ. When he has nights like that, he’s the most electrifying player in the NBA. That’s a pretty standard cliché to describe any exciting athlete, but in this case I’m pretty sure it’s literal, too. The energy comes through the screen. Watching Russ dunk someone’s face off will give YOU a shot of adrenaline.

Think about how cruel it is that any team has to guard Kevin Durant for 40 minutes and then go deal with the wrecking ball playing point guard.

Durant had 31, 5, and 5, by the way, but of course he did. Everyone on the Thunder played well last night.

It’s all working again. Ibaka has locked down the paint on defense, and his shooting frees up the offense on the other end. Who knows whether it keeps going in San Antonio — the Spurs won’t struggle like this again, and that two-game head start may be enough to help them survive — but at least for the last two games, we’ve gotten the raw and uncut OKC experience on national TV, and OKC at its best is better than any show basketball has.

Those first two Spurs wins came with discipline on both ends, a cascade of wide-open looks, and defense that made every OKC possession a little more painful to watch. Spurs blowouts are like a free basketball education.

OKC blowouts are like a basketball hallucination. The highlights at the rim, the reckless pull-ups from 20 feet that fall anyway, the athleticism all over the court. Eventually everyone gets a little delirious, because Russ is on fire and KD is ice cold and it all just keeps going.

None of this should be possible. Westbrook had three knee surgeries in 13 months, Ibaka was out for the year, yeah. But that’s not even what I mean. Knee surgery or not, no point guard should be able to do what Westbrook does. No big man should have the range of Ibaka on one end and all that strength on the other. No scorer should be built like Durant. Nothing OKC does on a basketball court should be imitated, because almost anyone else would fail miserably. But that’s what makes it awesome when they succeed.

netw3rk: The quintessential Russell Westbrook play is to careen headlong into a thicket of bad ideas and, armored by the swaggering unconcern generated by a nuclear-level athleticism, come out the other side with something really fucking awesome. He blocks shots so as to observe their arcing flights into various sections of the lower bowl. He perceives multiple rim-shielding defenders the way a skateboarder might see a handrail and a set of stairs, stationary objects to be exploited for style points. He pulls up for irresponsible early-clock 30-foot napalm bombs because to hit one would be rad. He is the basketball version of parkour, a cost-benefit analysis that says doing five amazing things is worth doing 2.5 stupid ones.

The deserved appreciation for the consistent, intelligent, and balanced approach of the San Antonio Spurs is, in effect, an appreciation of the artfulness with which Gregg Popovich hides that team’s weaknesses. The Spurs are deep, skilled, and deployed in a way that maximizes their talents while minimizing the fact that they are, at their core, older than Grand Canyon dirt. All that guile and meticulously crafted balletic motion is enough to baffle any team that doesn’t have the fast-twitch blink-and-miss athleticism of the Thunder.

Being smart is important. But, sometimes something as dumb as gunning the engine, leaving defenders like a rocket leaving Earth en route to a coast-to-coast dunk past the outer solar system with additional extended display of sidearm holstering just trumps everything else. Great plan, guys. [Screeching of tires amid cloud of smoke.] Bye.

Popovich is the best X’s-and-O’s coach in the league and his Spurs just got ran off the court and out into the Oklahoma night basically because Russ is reaaaaally fast and can jump, like, kung fu–movie high. Westbrook had 40, 10, and zero fucks, and the Thunder outscored the Spurs in fast-break points you-have-no-chance-to-catch-him-so-just-let-him-go to 0. In other words, right now, the Spurs are playing chess and the Thunder are playing PlayStation.

Danny Chau: The Thunder are 23-5 this season, including the playoffs, when they log at least 10 steals in a game. They’re 36-5 when they block at least eight shots in a game. They’re undefeated (8-0) when these events converge. Last night was one of those games. Since Serge Ibaka’s return, the block differential has been staggering — 18 for the Thunder compared to only four for the Spurs.

The key to the last two games is simple, and it’s the same reason why the NBA draft combine is important — speed and length matter a whole lot. It’s how time and space is manipulated on the floor, and it’s the most logical way to generate the chaos OKC craves. It’s the reason why, for example, Jeremy Lamb, despite making a number of mistakes covering his man, was still able to nab three steals and register as a defensive plus. He glides gracefully, and his arms extend out six feet and 11 inches despite him only standing 6-foot-5. He wasn’t always in the right place at the right time, but that doesn’t matter when a lateral step to the right or left puts you back in position to make a difference.

The Thunder are at their best when chaos is a product of their outward projection. They are stylistic extroverts most comfortable with justifying themselves aloud. They’d rather build sculptures from the trash they generate on the court than dig deep within only to find the inner workings of a failing system. And it did appear to be failing. But Ibaka’s return allowed coach Scott Brooks — model of consistency, for better or worse — to embrace the Thunder Way. And boy, did Brooks go wild! He cast Thabo Sefolosha and Nick Collison to the bench and tossed some loose debris in Lamb onto the court, just to see what would happen. Well, now the series is tied, and the trash sculpture has become a Gothic spire atop the Church of Westbrook.

About Last Night: Rangers Run Over