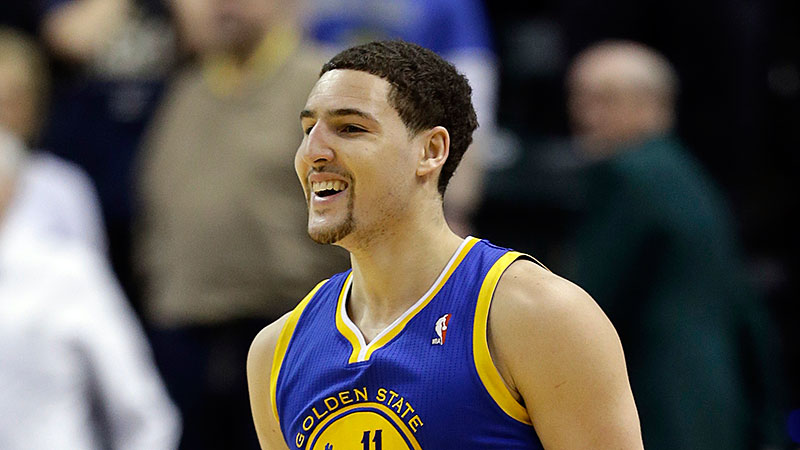 This game kind of sucked to watch. At one point Jordan Crawford and Lance Stephenson got into it and I thought the world was going to end. This was one of those contests where you feel like — despite empirical data to the contrary — you are watching Luis Scola play Jermaine O’Neal one-on-one. That ever happen to you? Eighty-two-game seasons play tricks on your brain. I can look at the box score and see that Paul George had 26, David West had 27, and Steph Curry had 19, but in my mind, all I see is Scola and Jermaine. It wasn’t pretty. In the end, though, the game was won by one of the prettiest players in the league.

Klay Thompson, who has been mildly slumping in his last 10, even though the Dubs have been fairly hot over that same stretch, hushed the crowd with that slick game winner above. He had 16 in the fourth quarter, and he did it all despite looking like he bought a Captain Jack Sparrow facial hair kit right before the game. Very “darkest timeline,” Klay.

The Pacers are 7-3 in their last 10, so it’s hardly like they need a crisis-management team. But when you watch them, they look like a bunch of guys who have been gripping the wheel real tight all season long, and now they’re losing the handle a bit. They’ve added some guys, in Evan Turner and Andrew Bynum, who don’t have the most phenomenal locker-room reps, and they have put such a huge emphasis on getting the no. 1 seed in the East … I’m not concern trolling, but they look out of sorts. Something to keep an eye on.

Chin up, Cleveland. San Antonio might have put on a basketball clinic in your gym — winning by 21, and racking up assists on 39 of 43 field goals. But you still have Dion Waiters.

Speaking of the Spurs

Russell Westbrook Is a Perfect Unicorn

This little game within the game has made this game fascinating. Westbrook finds Ibaka for an open dunk and screams "I DO THIS (****)!"

That’s 15 in a row. Just on a personal note, this Sixers shit is not funny to me. Russell Westbrook had a triple-double in 21 minutes, Durant had 42 (while missing six free throws), and Perry Jones III scored 12, starting in place of Thabo. I have to wonder how many guys on the Philly roster could make the Tulsa D-League team at this point. Do I wish the Sixers had Monta or O.J. or Millsap and won four to 10 more games? Do I wish they would run Nerlens Noel out there to see what he can do with 15 or so games of a rookie campaign? I can see the arguments against all of that. But giving up 100 or more points in 14 of their last 15 losses and having dudes named Elliot out there for real, in a real NBA game, against the Thunder … Maybe I’m just not built for tanking. Honestly, it sucks. All things being equal, I’d rather be cheering for the Wizards.