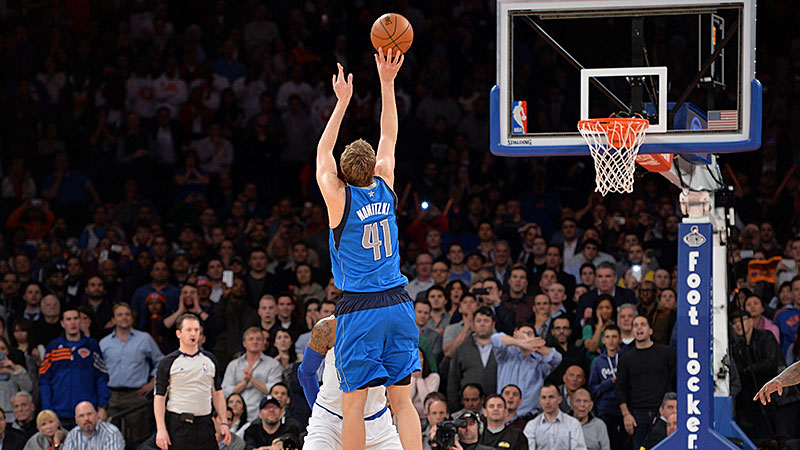 A quick run through last night’s NBA action, with GIFs and riffs. Expect to see more of these as the games come faster and louder in the next couple of months.

One-Handed, Off One Foot, Kiss the Rim, Bounce It Off Mike Woodson’s Career

Kirk Goldsberry: Last night in the world’s most famous arena, the world’s most famous midrange shooter buried an ugly game winner as time expired. The shot was symbolic of two teams currently going in opposite directions. For Knicks fans, it was a heartbreaking moment buried within a gut-wrenching season; New York has now lost nine of its last 11, and stands 15 games below .500. For the Mavericks, it was their ninth win in their last 11 games. These are the kinds of bounces that happen to teams on these kinds of runs.

Despite strong defense from Carmelo Anthony, who had 44 points in defeat, Dirk Nowitzki was able to create just enough space to launch one of those patented Nowitzki rainbows up and toward the hoop. The ball initially hit the back iron and sprouted upward, and for a split second, the game looked like it was headed to overtime. But then gravity returned the ball back to the hardwood by way of the net. After the game, Dirk seemed almost embarrassed by his good fortune. 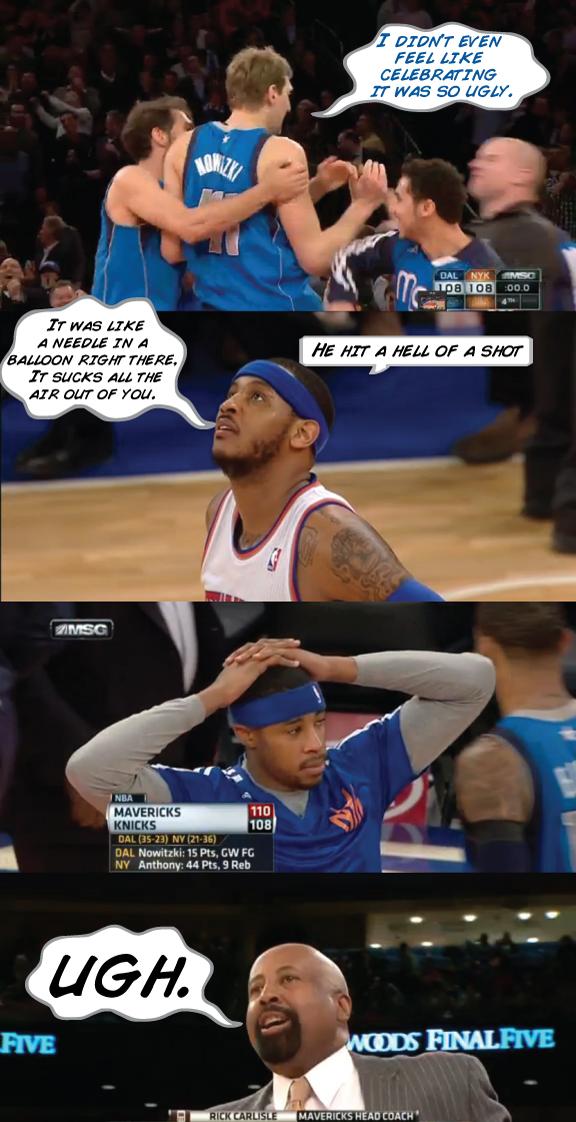 The bounce seemed lucky, that’s for sure, but luck happens when you are arguably the game’s premier midrange shooter. There is nobody on the planet I’d rather have taking that kind of shot than him. In fact, he makes 47 percent of his shots from that exact spot, which is much higher than the league average of 39 percent. 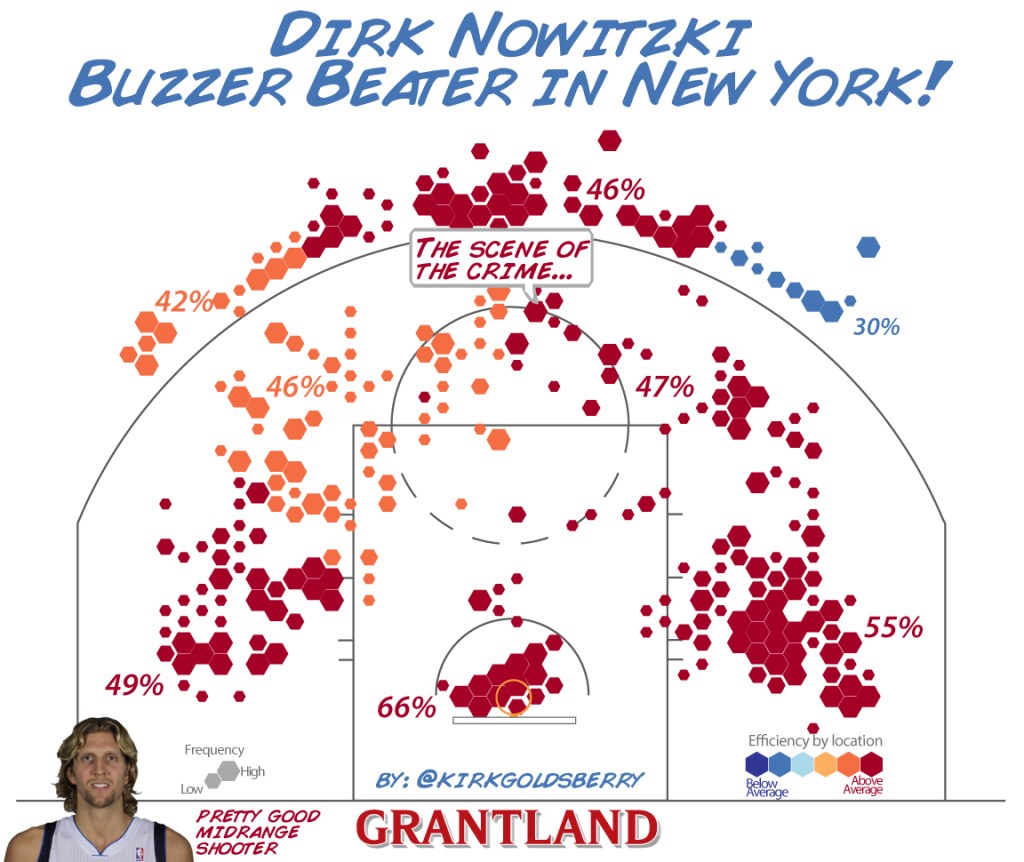 This game came down to one shot from 20 feet away, and there’s nobody on the planet better at making that particular shot than Dirk. Calling it lucky seems a little far-fetched.

The Most Fun Backcourt in Basketball

Chris Ryan: Monta Ellis and Jealous Ones Still Envy Calderon went for a combined 42 points last night. This backcourt should not really make sense, and in the playoffs they might get treated like turnstiles, but right now there is no more entertaining guard combo in the league. The spacing on the Mavs offense is inch-perfect, people can’t deal with Dirk surrounded by shooters, and you’ve got these little chuckers flying all over the place, causing havoc. FYI, Dallas could possibly draw the Spurs in the first round of the playoffs, so if you were putting off getting Lasik, maybe go ahead and get that taken care of now, so you can be 20/20 for the basketball ballet.

Inside the Knicks’ Locker Room

Ryan: The most depressing/hysterical sequence from last night’s Knicks-Mavs, was J.R. Smith’s VERY CONTESTED 22-footer with about 10 seconds remaining. J.R. basically waved off a very hot Carmelo Anthony to try to be the Maximus of this shit. The possession resulted in a turnover, due to shot clock violation. Woodson face. After the game, Grantland obtained this exclusive footage of J.R. and Melo having a frank exchange of views in the locker room.

The Sixers’ Season, in One Image

Ryan: Couple of things: it’s weird to watch Klay pop the top like this, just because I associate him with being such an “I can’t believe it’s not butter” type of player. Also, it’s AMAZING how this happened in front of the Warriors’ bench. They reacted in a very sportsmanlike fashion …

We are not that far from some poster victim going nuts and freaking out at the Dubs bench. It’s going to happen, it’s just a matter of who does it. Shout-out to Kyle Singler for really embracing his death scene. Most guys try to walk this off, but Singler stumbled into the camera crew and collapsed. Best Supporting Actor for you, Dukie.

Was the first Ali-Liston fight fixed? The FBI thought so.