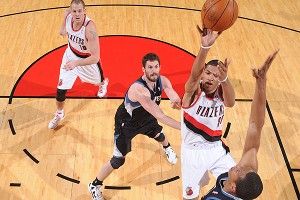 Life moves pretty fast in the NBA offseason. Lucky for you, Ben Detrick is here to analyze, summarize, and euthanize all the head-scratching, cap-busting, Bird-righting free agency and draft moves. He’ll be checking on all the teams, division by division. For the Atlantic Division, click here. Today: the wild frontiersmen of the Northwest!

As the Nu Spurs — a Western Conference team with dynastic potential from a city that people mainly visit because their van overheated on the way to the meth lab — the Thunder are now operating with the intention of being terrifying. Just as San Antonio elicited moans from basketball fans when they nabbed DeJuan Blair in the second round back of the 2009 draft, Oklahoma City drew the coveted “Are you frigging kidding me?” response when Perry Jones III fell into their laps in the 28th slot. Even Miles Plumlee (despite having a name that sounds like a villain from Django Unchained) went ahead of him, inciting speculation that the Pacers were exacting revenge against the Heat by helping the Thunder.

Jones, the athletic Baylor forward with knee and motor issues, is the perfect flier for a young team who already has it all. If he pans out, the Thunder can let Serge Ibaka walk after next year, when the Houston Rockets offer him a max contract and brisket platters for life. At worst, Jones’s meniscus evaporates and the Thunder are still in contention for the next decade. In his first summer league game, Jones notched 16 points and eight rebounds. As Stephen Jackson said before his Spurs were ousted by the Thunder: “If you scared, go to church” (preferably one of those mega-churches that also triples as an automatic weapon range and an exclusive Mountain Dew Code Red tasting club).

Did you hear? JaVale McGee is reportedly working with Hakeem Olajuwon this summer! Since Kobe Bryant and Dwight Howard spent time practicing Dream Shakes and Nightmare Pivots and Slumber Curls, being schooled in the ways of the polished big man has become the NBA’s version of the Bilderberg Group. LeBron James underwent the ritual last summer. Amar’e is taking part during this offseason, as might his teammate Tyson Chandler.

While other big fellas like Omer Asik, Roy Hibbert, and Spencer Hawes have been given offer sheets, there’s been surprisingly little interest in McGee, another restricted free agent. This doesn’t appear to be a case of other teams believing the Nuggets are dead-set on matching any offer or maxing him out — after all, negotiations between Denver and McGee’s representatives are said to be ongoing.

So what gives? Is there not a single NBA team brave enough to offer $14 million a year for roofless talent, tireless (social media) work ethic, and the ability to create some of the most breathtakingly funny highlights in NBA history? It’s mind-boggling that the Sixers are spending around $11 million a season for Hawes and Lavoy Allen, when neither of them has ever attempted to dunk from the foul line and taken a Chevy Chase pratfall instead. Has either ever goaltend-spiked a ball into the stands? Or sprinted back on defense while his team still had possession? Plus JaVale is going to be rocking opponents to sleep with his new Drowsy Drop-Step next season.

Making fun of the Jazz is the low-hanging fruit of NBA-themed humor. The Mormon fans. The square-ass Prohibition Era liquor laws. The undying association with revealing Stockton Shorts. The penchant for drafting ungainly white dudes (prior to this year, six of their last nine picks were Caucasian). But you know what? Let’s praise the Jazz instead.

One would have assumed the trade of Deron Williams was a precursor to several seasons of shameful tanking, but Utah remained competitive. While the Jazz were obliterated by the Spurs in the first round of the playoffs, they finished the season with a .545 winning percentage — the same as the Knicks and the Mavericks, and better than the Sixers. Progress could be derailed when prized post combo-pack Paul Millsap and Al Jefferson become free agents after this season, but the Jazz already have a frontline of the future in Enes Kanter (20) and Derrick Favors (turning 21). Gordon Hayward (22) and Alec Burks (turning 21) and are also young contributors.

In a small market that will never appeal to superstars looking for endorsement opportunities, Club LIV, Jack Nicholson’s fandom, or eight Jay-Z concerts on their home court, Utah has decided the least-impossible route to success is striving for the second tier. This explains the acquisitions of Mo Williams and Marvin Williams, two individuals few rebuilding team would get involved with — mostly because they make close to $17 million combined. Yep, Utah is trying to win games in 2012-13. With two new players at positions where they were weakest, two talented big men hungrily eying free agency, and a flock of decent youngsters, the Jazz are a dangerous sleeper (who still might finish fourth in the Northwest Division).

Maybe it was all the highlights of Ricky Rubio threading off-the-hip bounce passes to jubilant Timberwolves, but suddenly everyone wants to take their talents to the coniferous shores of Lake Minnetonka. In a locker room where white dudes can listen to Deep Puddle Dynamics and argue about the region’s finest Honeycrisp orchards without shame, it made sense that the T-Wolves signed Russian guard Alexey Shved, traded for Chase Budinger and expressed interested in the Celtics’ backup center Greg Stiemsma. But when Brandon Roy came aboard as a reclamation project, it set the stage for a monumental cockfight between Minnesota and his former club, the Trail Blazers.

If Portland was perturbed by the signing of Roy, they were reportedly furious when the Timberwolves offered restricted free agent Nicolas Batum an offer sheet worth $46 million over four years. The talented 23-year-old Frenchman averaged a respectable 14 points and five boards per game last season. Despite all indications that Portland would match the offer, Batum’s agent declared his client had no interest in returning to the land of nano-batch pork jowl sliders and strippers with sparrow tattoos. “Hopefully, Paul Allen would never stand in the way of his dream to play for the Timberwolves,” he said, NAMING NAMES. In response, Blazers GM Neil Olshey fired shots. “I guess he’s into mosquito bites and frostbite,” he said of Batum. BANG BANG OLSHEY GANG.

As a result of the drama, both teams reportedly escalated things with increasingly silly decisions. First Minnesota offered to give Portland two first-round picks in a sign-and-trade for Batum. Then the Trail Blazers laid down the gauntlet for idiocy by refusing. Anyway, Portland is going to match the offer sheet, and Batum’s lifelong dream of playing in the Frosty Fortress That Tom Gugliotta Built will be deferred for a few more years.

Over the weekend, the Blazers shipped portly malcontent Raymond Felton back to New York in a sign-and-trade. While he thrived on the team two seasons ago, the news fueled rampant speculation about the player the Knicks are apparently giving up — can Jared Jeffriesanity really be over?