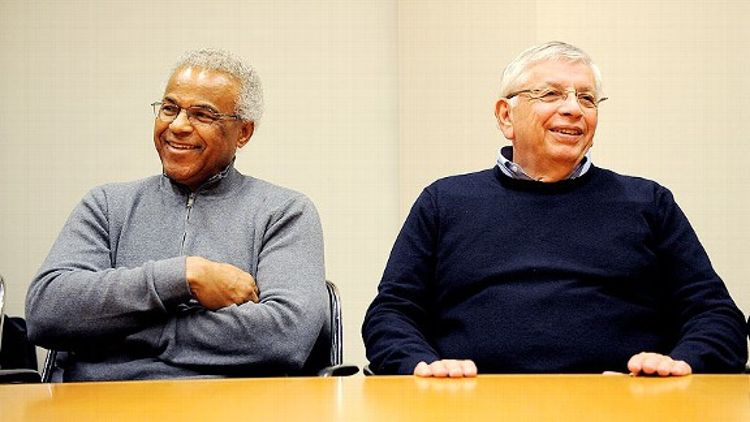 And now: a collective “You’ve got to be kidding me.” For weeks, whenever we saw Billy Hunter and David Stern — respectively, National Basketball Players Association executive director and NBA commissioner — they were in suits, the suit being, of course, the attire of business, and business being, for 149 days, what both sides of the NBA lockout said they meant. That the lockout lasted as long as it did proved they meant otherwise; and, anyway, on Hunter, a suit always asked, “Where’s my Pineau des Charentes?” Mostly, he and Stern wore suits because what else would they have worn to such high-stakes, high-profile negotiations?

Well, on Saturday, at close to 4 a.m., after a reported 15 hours of hammering out a deal that would end the lockout, we discovered exactly what else. Hunter and Stern sat at the center of a long conference table at a midtown Manhattan law firm. They weren’t in suits. They wore just about the last thing you’d expect from two people who have been as entrenched as they claimed to have been. Both men sat at that table wearing a piece of clothing that totally belied the incompetence and complacency and intransigence on both sides of the lockout, the heartlessness, cluelessness, ruthlessness, and indifference to the sport itself. They wore the tasteful opposite of boardroom business, and they did so in a move that, under the circumstances, can be understood as an act of desperate cynicism, a calculated plea for gratitude, sympathy, and hugs.

At 3:40 a.m., Billy Hunter and David Stern ended the NBA lockout in sweaters.

It’s possible you saw photos or footage of them at the table — Hunter hunkered down in a grey zip-neck pullover, Stern in a midnight crew neck — and your heart melted. It’s possible that the sight made you fast forward all the way to the end of the freshly thawed season and think: Father’s Day. The sweater, after all, is a man’s least-evil garment. A sweater says Ned Flanders and Cliff Huxtable. It says, “Don’t hate us, we’re grandfathers.” It says, “I’m reading Clive Cussler” and “I’ve left it to Beaver.” On them, the sweater can say “Sunday afternoon,” “We have andirons,” and “What’s Twitter?” It can sing, in the vaguest of whispers, “Won’t you be, won’t you be my neighbor?” Of course, on these two, any such charity backfired. Their sweaters inspired a kind of reverse cynicism.

It’s true, we don’t know how these two were dressed during those 15 hours. Or if we do, it barely matters. (A reporter who covered the lockout, including Friday and Saturday’s marathon, told me he wasn’t aware of any revised wardrobes.) At the very least, the sweaters constituted a tonal costume change. It hardly matters whether these two very different men got the cosmic memo on knits or someone walked into the room before Hunter and Stern met the press and said, “Please, you guys have to put these on; people will want to kill you less.”

Really, what matters is how they came to us to announce that a deal — a tentative one, they stressed — had been brokered. Nearly half a year of rancor would end just in time for Christmas, and look who’s dressed, more or less, for the holidays!

Even so, these aren’t the clothes of glad tidings. They’re simply the clothes of compromise, and, frankly, Hunter looked miserable in his outfit. He kept his sweater zipped uncomfortably high. The room could have been cold. But Hunter sat with his arms crossed for a lot of the press conference. It wasn’t so much that he was hiding anything as that he appeared to be saying, “Look, except, for the projected $3 billion concession to the owners, I’m not giving anything away – not even whether I’m wearing a shirt underneath this pullover.”

Of course no one looked less happy than players association president Derek Fisher, who sat to Hunter’s right. He, too, was sweatered — his was a cornflower-blue v-neck over a white shirt and dark tie and under a sand-colored suit. Splitting the difference between business and casual, it represented the biggest compromise of all: the result of, perhaps, too many memos. Stern, by comparison, looked open and free. He comported himself, like what he was — on paper, anyway — not a total loser. If he didn’t seem thrilled to be up at that hour and in front of the media, he did seem pleased not to be Billy Hunter.

While the world got the NBA back over the weekend, negotiators all over the universe got something else: a helpful hint. If you want millions of people to forgive the months you spent infuriating and exasperating them, solve the problem, yes, but say you did it in a sweater.

Wesley Morris is a contributing writer to Grantland. He reviews movies for the Boston Globe. Follow him on Twitter at @wesley_morris.