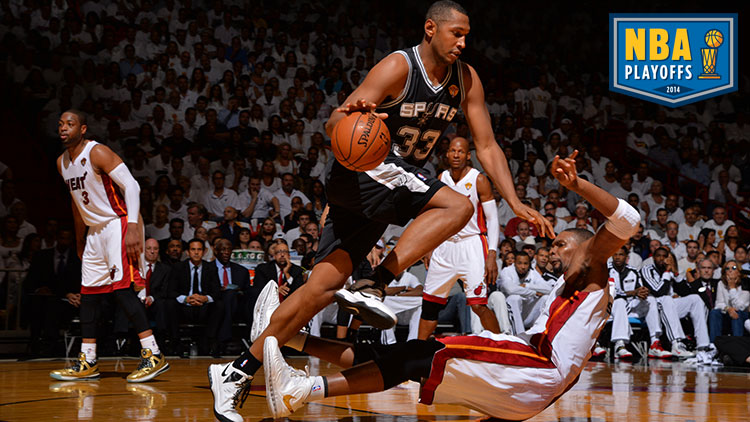 netw3rk: Games 3 and 4 have been essentially one uninterrupted Spurs highlight reel. The Heat’s hyper-athletic, swarm-and-recover defense is being undone by the physical fact that the ball moves faster than the man. Possession after possession, the cumulative effect of the Spurs’ ball and player movement has been that of an unanesthetized surgical procedure performed on the Heat’s dynastic ambitions. If the Spurs took more than three bad shots all game, I’d be surprised, and, either way, they probably made them. Twenty-five assists on 40 made baskets, 57 percent from the field, 43 percent from 3. The Spurs got every shot they wanted and the Heat were chasing shadows.

The “Spurs are boring” meme is (1) subjective, and (2) bunk, but I do wonder if that particular slander would’ve had any traction if San Antonio’s evolution were reversed. From 1997-98 to 2008-09, the Spurs played at an average pace of 89.25 possessions per 48 minutes, per Basketball-Reference.com. Their last championship team, in 2006-07, played at a pace of 89.8 possessions per 48 minutes, fourth-slowest in the league at that time; that number would be dead last in the league this year. Those teams were dominant defensively and built around Tim Duncan’s post offense. As Duncan aged, Pop went to the more perimeter, up-tempo, move-the-ball system that is so casually eviscerating Miami in these Finals. Since finishing the 2008-09 season with a pace of 88.4, the Spurs have steadily pushed down on the accelerator year after year, ending this regular season at 95 possession per 48 minutes, the 10th-fastest pace in the league, with an offensive rating of 110.5. Just for a sense of proportion: The 2005-06 fun-and-gun-and-everyone-loved-’em Phoenix Suns played at a pace of 95.8 with an offensive rating of 111.5.

All of that is just a long-winded way of saying: Holy shit. You could sense the frustration from the Miami players as the Spurs dismissed them again and again, possession after possession, on both sides of the ball, and with shocking ease. The Spurs are like a test you studied for, only to realize there was a whole other chapter you didn’t know you had to read.

Where Assists Actually Come From 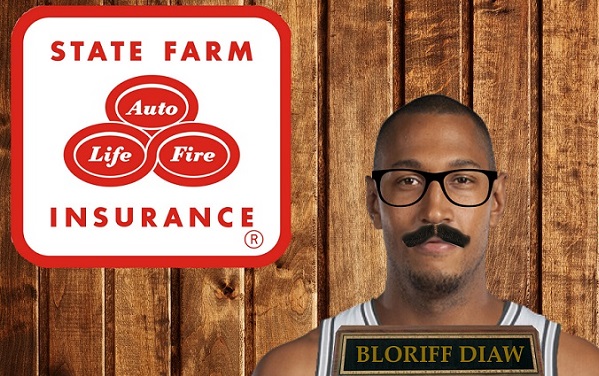 State Farm needs to get with the times and start putting out Bloriff Diaw ads.

• With 3:41 remaining in the second quarter, Erik Spoelstra decided to put Toney Douglas in the game with the Heat down by 17. That was when I knew it was over. I winced as Douglas checked in at the scorer’s table. All I could think about was this.

• Hmm, yeah, this might be the perfect summation of Douglas’s NBA career.

• With 2:43 left on the clock in the fourth quarter, Mario Chalmers, who had missed his last five 3-point attempts in the series, finally drilled one. Unfortunately, it went in after the whistle blew the play dead. About 13 seconds later, he would attempt another 3, one that would have counted. He missed it. 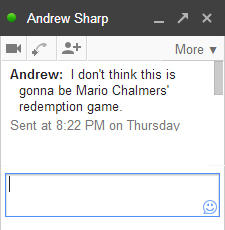 • Behold, the coolest play from the Heat all night, courtesy of Mr. Douglas in garbage time:

• After the game, Spoelstra was asked about Michael Beasley as a possibility for Game 5. That’s where we’re at now. The Human Victory Blunt of series past has become the Ultimate Act of Desperation.

• Between Spoelstra’s unconscious white-flag waving in the second quarter with Douglas’s court appearance, and the mere mention of Beasley as someone worth considering for playing time, this series has crossed a dangerous threshold. We’ve entered the realm of fantasy, where even really, really bad ideas can start looking like potential salves for the Heat’s woes. Douglas has been lauded as a natural on-ball defender since his days at Florida State, and he certainly has the makeup to be a very effective one. But you would think his journeyman status would chip away at that reputation he’s built up. It hasn’t. And so he strode around with jazz hands until he was yanked. Beasley, bless his heart, has spent six years hammering in the point that he can’t be the player he was in college six years ago. Yet so many still choose to believe. What does that say about us, and what does it say about the Heat if that’s a question that’s being asked even half-seriously?

The Beginning of the End

Andrew Sharp: All day long Thursday, I was pretty much positive the Heat were winning Game 4 and this series was going seven games. There was just one second during the day when I remembered the box score from Game 3, remembered that Dwyane Wade had actually played pretty well (8-for-12, 22 points), and thought that could be a red flag for Miami. At this point in the title chase, the team can’t afford to waste good games from Wade, because at best you’re getting four decent games from him every series.

Then a second later, I shrugged off that thought and went back to making plans for a killer Game 5 on Sunday.

Wade was worse than Mario Chalmers last night. That shouldn’t even be theoretically possible in these Finals, but it happened.

It felt like he missed a thousand floaters at the rim, and later the shot chart confirmed it. He was a step slow everywhere he went, and watching him flail around just got uncomfortable about midway through the third quarter. This all made him the perfect face for everything that happened with the Heat last night. They were so bad on defense and so impotent on offense, it’s hard to even say which was worse.

Chris Bosh scored six points after the first quarter. Rashard Lewis played nearly 16 minutes for two points. Birdman had five points and five fouls. Mario Chalmers did Mario Chalmers things, so his redemption will have to wait one more game. Wade probably deserves extra credit since he can’t move or shoot and he makes the Heat a lot easier to guard, but everyone was horrible last night.

Even LeBron. He scored 28 points on 10-for-17 shooting, and everyone will blame his teammates. They’re not wrong. But 19 of those LeBron points came in the third quarter, after the Heat were already down by as much as 22. Had that player showed up in the first quarter, there’s a good chance the whole game plays out differently.

Instead LeBron was human for the first half, something the Heat can’t really afford at this point. He actually started the game with what sounded a lot like a case of diarrhea. So maybe that’s an even better metaphor than Wade for what happened last night.

Either way, Thursday was the first time this Heat team had looked mortal in a long time. You could start to see the end of this whole experiment. In Game 3 it was different. In that game they came back from halftime looking every bit as good as the Spurs; they just didn’t have enough to dig out of a 25-point hole. Last night, everyone but LeBron spent the whole game looking old and overrated and overwhelmed.

It took exactly two quarters for that whole Carmelo dream to look exactly as ridiculous as it probably always was. The problem isn’t Carmelo, or salary cuts, or sharing the ball, or even defense. The problem with trying to extend this title run the next few years is Wade, Bosh, and the rest of an expensive, broken-down roster that’s played 100 games per year since 2010. I know that’s probably always been true, but man. Last night it felt obvious.

Shea Serrano: Gregg Popovich is a human with a cell phone so I sent him some text messages during Game 4 of the NBA Finals.

Me: Oh, man. I have some good news, Pop.
Pop: This’ll be something.
Me: You guys are going to win tonight.
Pop: Oh yeah?
Me: Yes. Because my mom gave the Heat ojo.
Pop: What?
Me: Ojo.
Pop: Excuse me.
Me: Ojo.
Pop: you keep saying it but you’re not explaining it
Me: It’s kind of like putting a curse on someone but not really. Maybe it’s more a stink eye + a jinx. It’s a thing Latinos do.
Me: Like, let’s say you’re eating an ice cream cone and you drop it. That’s because someone was giving you ojo.
Pop: or it’s probably because I dropped it
Me: no. that’s what ojo wants you to think
Me: that’s how ojo works
Me: it’s why old Mexican women think it’s OK to walk up to you and touch your baby on the head because they don’t want to give it ojo
Pop: or else I’ll drop my baby
Me: not really, it’s just … I don’t know. you sort of just have to know what I’m saying.
Pop: so you’re saying your mom is going to walk up to LeBron and touch him on the head?
Me: no
Pop: so you’re saying LeBron is going to drop his ice cream because your mom likes ice cream?
Me: there are different types of ojo
Pop: What kind did your mom give to LeBron?
Me: oh
Me: um
Me: well
Me: see, that’s the thing
Me: she’s very serious about it
Me: her ojo is super
Me: old Mexican moms have the best ojo
Me: I saw her cause a car crash with her ojo once
Pop: what kind did your mom give to LeBron?
Me: she used all of her ojo powers to make his arms and legs fall off
Pop: Come on.
Me: She’s a big Spurs fan.
Me: I’m just saying, if he comes rolling out for Game 4 without his limbs, then that’s what happened.
Pop: OK. thank you for the warning.
Me: you’re welcome
Me: go Spurs go