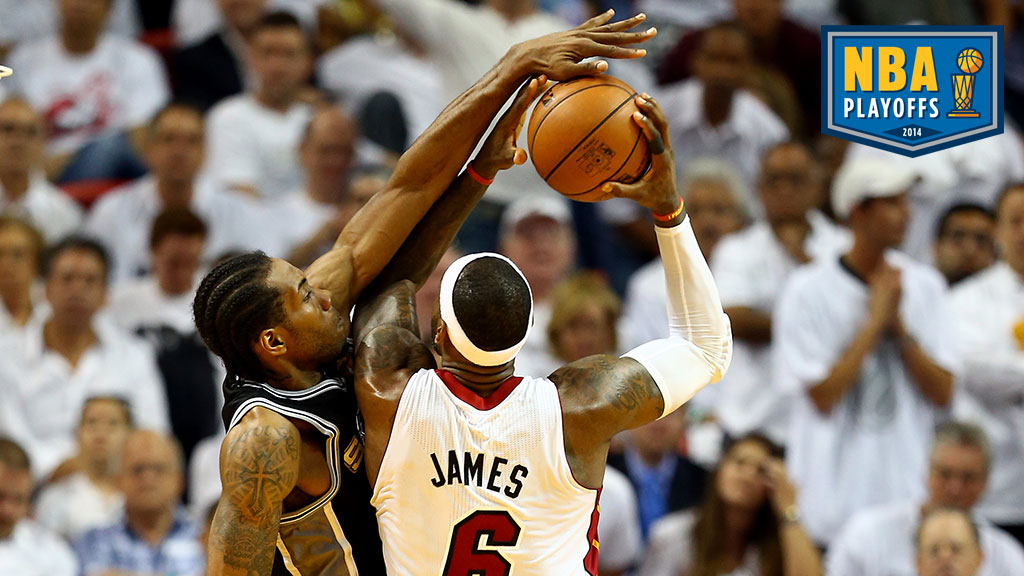 The Spurs are winning this series mostly on offense. They have scored nearly 120 points per 100 possessions so far, a mark that would be the greatest in league history if a team of X-Men somehow joined the NBA and actually played this well over 82 games.

San Antonio has grown comfortable against Miami’s trapping defense — more comfortable than any team has been since LeBron James and Chris Bosh signed with the Heat in July 2010. Until last year’s Finals, the Spurs hadn’t seen Miami at full strength, and when the Heat dialed up the berserker gear only they can reach, San Antonio occasionally became unnerved.

But they’ve gotten their reps now. People with the Spurs will tell you how huge that is. They have seen Miami’s speed, felt it, mastered strategies to defeat it. It helps that Manu Ginobili and Tony Parker are healthy, Boris Diaw more comfortable, and Patty Mills a legitimate weapon instead of a towel-waver.

It also helps that Miami can’t bring the same frenzy. The Heat’s adjustment in games following postseason losses, a situation in which they previously had been unbeatable for two calendar years, has been to simply play harder. That isn’t enough anymore, and the initial film review suggests they didn’t even do that Thursday, with their season nearly on the line.

Chris Andersen has been banged up all playoffs. Dwyane Wade is hobbling toward the season’s finish line. Shane Battier moves in and out of the rotation. The Heat just don’t have the oomph now to turn the dial to “destroy” — to extend the traps out further toward midcourt, swarm the strong side and the rim area for WTF steals, or press full-court. They don’t have a fallback defense. They’ve toned back their trapping this season, a recognition of age and fatigue during four consecutive trips to the Finals, but they’re still the most hyperactive defense in the league.

Their only adjustment, beyond some lineup tweaks, has been to find their hyperactive happy place. They can’t do that now, and the Spurs are way too good for Miami’s “B” game. They can see over and through traps that aren’t really traps, and blow by defenders who are closing out just a hair off-balance. Heat players who once popped up in your grill, feet perfectly primed, now arrive a beat late or gamble in passing lanes for steals they can’t get. Every Spur is driving by those guys with a new boldness; the Spurs are driving the ball to the basket more than ever against Miami, per SportVU data-tracking cameras.

Here’s a fun thing: San Antonio has scored just .465 points per possession in this series when a pick-and-roll ball handler finishes a play with a shot, turnover, or drawn foul. That is a horrific number. Like, the Sixers would be embarrassed to have the same result.

It also represents the difference between these Spurs and last year’s crew. More than ever before, the Spurs aren’t running pick-and-rolls to get buckets for one of the two guys directly involved. Both the ball handler and screener have finished fewer possessions for the Spurs in this series than they did for the season, per Synergy.

The number that’s up? Spot-up chances — shots taken by one of the three guys dotting the floor around those pick-and-rolls. They have finished 26 percent of San Antonio’s possessions in this series, up from about 20 percent in the regular season, and the Spurs have scored an unthinkable 1.25 points per possession on those trips.

The pick-and-roll is just a vehicle to bend Miami’s defense. Suck in the help defenders, whip the ball around, and watch the Heat scramble. The passes aren’t happening at random. This is surgical. The Spurs know which Heat defenders must shift, and where, depending on which pass San Antonio chooses, and they are attacking the Heat wherever they are most vulnerable.

If the first pick-and-roll forces, say, Ray Allen to sink into the middle and bump the roll man, you can bet the ball will find Allen’s man after one or two passes. Allen will have to rush back out to the perimeter, and he’ll be toast from there. His guy will either jack an open shot or drive right by him, keeping the machine whirring along.

These aren’t the Pacers, who dribbled themselves into a haze of turnovers bouncing aimlessly around picks toward the near sideline. The Spurs pass it there to a carefully placed release valve, and then they whip it all the way back to the other side. They’ve been doing this precise thing since the start of Game 1.

Kawhi Leonard slammed home an offensive rebound on a play that unfolded exactly like this, with Parker playing the role of driver, because no Heat player took care to recognize Leonard’s existence, let alone box him out.

The Heat have looked helpless and, finally, defeated. Wade and James have been lax about getting back on defense, and Tim Duncan, old man Tim Duncan, outran Bosh too often in Game 4. Danny Green got open for a first-quarter 3-pointer by simply swapping places on the perimeter with Parker, the two Heat defenders involved inattentive to what was happening. Leonard popped open for a triple late in the second quarter by just going through the motions of a two-screen flex action.

Neither of the screens actually hit Leonard’s guy (LeBron). Leonard didn’t even make his cuts all that hard. But James fell behind the play before he even really got involved in it, and meekly pointed for Wade to switch onto Leonard. Wade didn’t. Leonard was wide-open. He missed then, but he nailed an open 3 late in the third quarter by popping behind a back screen from Ginobili that hit Wade flush. 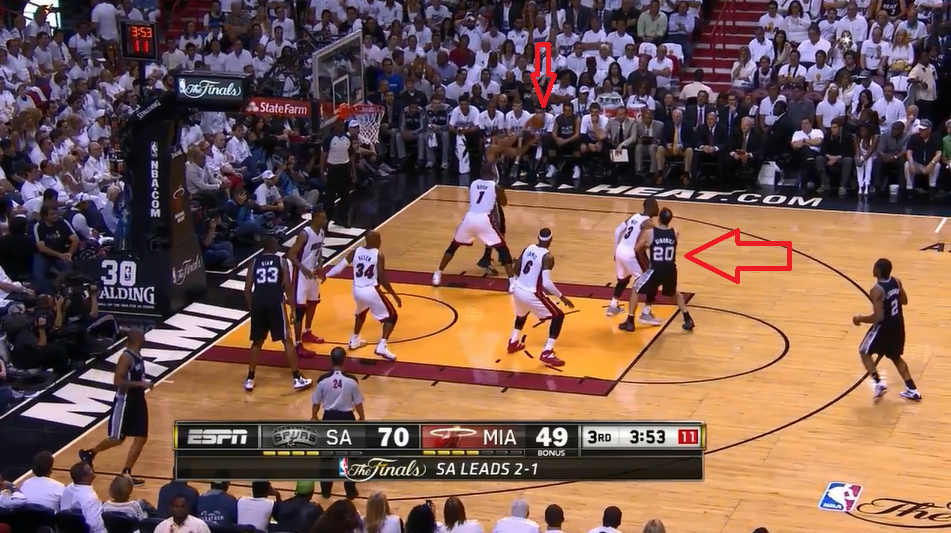 LeBron, guarding Ginobili, saw the screen coming a mile away but didn’t bother calling it out or switching onto Leonard. He slid out late to challenge Leonard’s shot, but as Leonard rose up, LeBron stayed down, hands at his sides. 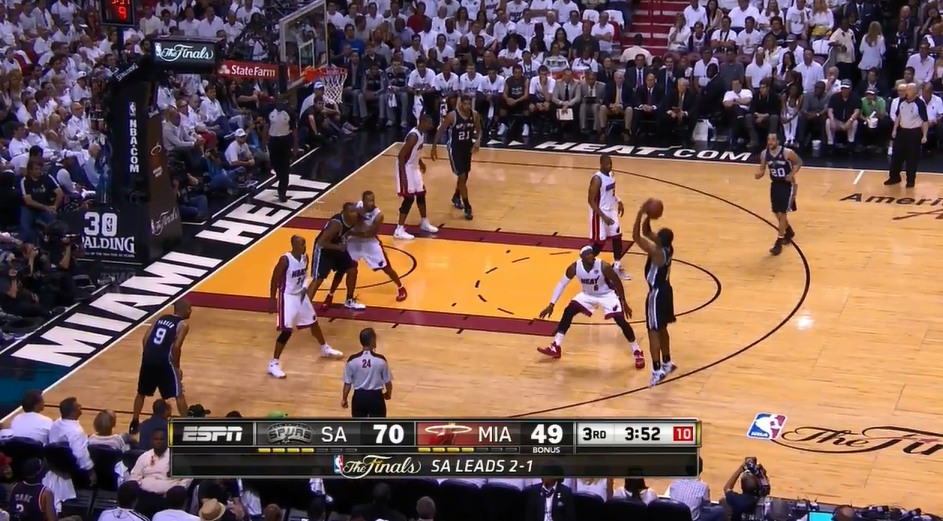 The Heat needed an “A” version of a defense they can’t summon right now. They got the “C” version of whatever it is they are doing on defense as their season slips away.

The Spurs? They brought the “A” version of everything.

Most of us assumed the Spurs would guard the Heat just as they did in last year’s Finals — by sagging way off LeBron and Wade, daring them to launch midrange jumpers. But they haven’t played that way, especially against James, and they’ve introduced their own new defensive wrinkles — more switching, and aggressive help off Rashard Lewis.

Their defense nearly reached the level of their offense in Game 4. They were brilliant switching off on Allen’s baseline cuts and snuffing the resulting mismatches with pitch-perfect help. They moved together, on a string, a team operating at the height of its ability, with a fully realized mind-meld.

Take this Norris Cole–James pick-and-roll on the left side early in the second quarter. Cole gets to the middle of the floor, prompting Tiago Splitter to leave Bosh in the right corner: 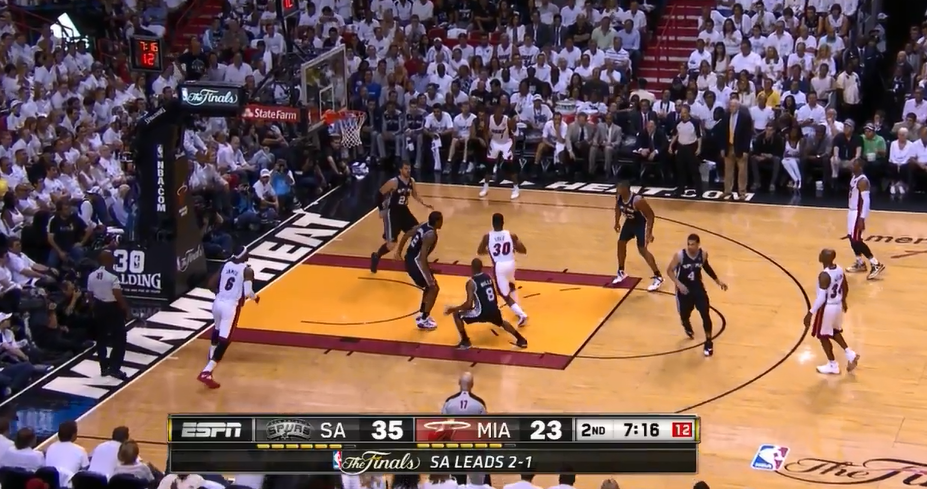 Cole swings the ball to Bosh, and Diaw dutifully rotates off Wade up top and onto Bosh: 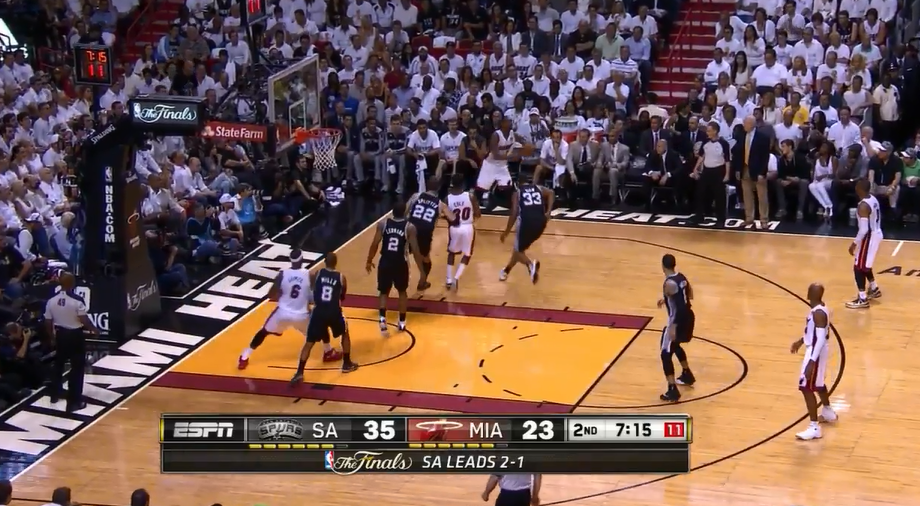 Look at Danny Green in that photo. He should in theory rotate to Wade, but he’s guarding Allen, and Wade is a nonthreatening outside shooter. Bosh dishes to Wade, and Green stands his ground: 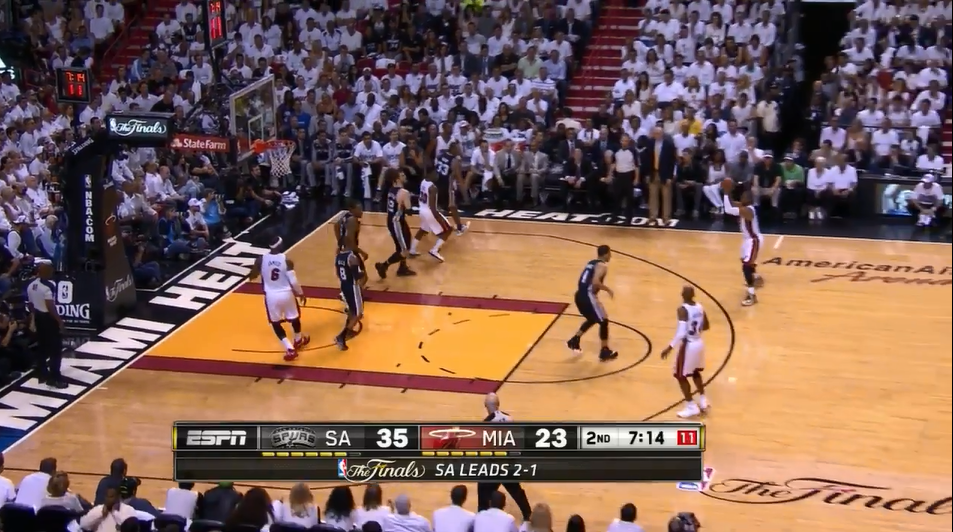 Wade swung the ball to Allen, and the Spurs had Miami back at square one.

The whole game was like this. San Antonio’s decision-making on defense was airtight. The Spurs helped at the right times and off the right players, sticking to the Heat’s better shooters. They got more daring off both Lewis and Mario Chalmers, with Ginobili at one point abandoning Chalmers completely in one corner to help Leonard contain a James post-up.

LeBron got his points, and the Heat got some traction early using him as a screener in pick-and-rolls. But Leonard has contained him well enough in the post and on perimeter isolations to minimize the damage he can do as a creator.

The Spurs’ defense was so good that even Miami’s super-small lineups couldn’t change the course of the game. Those groups, so dangerous, had only logged about 10 minutes combined in the first three games of the series. They were Erik Spoelstra’s ace in the hole on Thursday. He went to one iteration in the first quarter, marking the first time all postseason such a group had appeared so early. Spoelstra typically uses them as his crunch-time knockout punch. (To be clear, the lineups we’re talking about feature one point guard, Allen, Wade, James, and Bosh. No Battier/Lewis hybrid player, or second big man.)

Those killer lineups played the Spurs to a draw before Spoelstra went elsewhere, including to Udonis Haslem, whose insertion was the only thing that got the crowd going late. They failed to take full advantage in part because Gregg Popovich mostly stayed big against them, with Diaw and either Duncan or Splitter on the floor.

Diaw guarded Wade on one end and attacked him in the post on the other, creating buckets for himself and sucking defenders toward him in ways that compromised Miami elsewhere. It was unclear why Wade was guarding Diaw; LeBron is the nominal power forward in those lineups, and he wasn’t usually guarding Parker. Spoelstra could have slid James onto Diaw, neutralized that matchup, and shifted Wade onto Leonard or Ginobili.

But Wade could not attack Diaw on the other end, allowing the Spurs to mostly stay true to their identity. San Antonio can play small ball, with Leonard at power forward, but it prefers not to. The offense flows more naturally with two big men — two screeners, two guys at the elbow, two post threats. It does better on the glass. Miami won last year’s Finals because it forced the Spurs into small ball, and the Heat can out-small anyone.

The rotations are different in this series, and the results are, too. Sunday looks to be a coronation that would have been unthinkable three or four years ago. You are in awe watching the Spurs now. Press row just breaks out in collective laughter and head-shaking a dozen times a game, as the Spurs do something beautiful; with so many quick-hitting passes flying one step ahead of the defense that is supposed to be the league’s quickest, you can’t help but yelp and shake your head.

You are in awe of Parker, running around, jacking midrangers, and working his isolation game against Chalmers and Cole when the situation calls for it. Ginobili is an artist. Diaw fills all the gaps. Leonard’s footwork is astonishing.

The Spurs, man … the freaking Spurs. What a team. The Heat are fighters, but the Spurs can smell it. Game 5 is on Sunday. Be ready.

Other Random Observations From a Slaughter in Miami

• The Heat hand out glow sticks to every fan for use when the lights go down during lineup introductions. I went to the bathroom at halftime, and there was a glow stick in my urinal. Sad times.

• There was actually a strong showing of Spurs fans in the building, including several Argentine-heavy contingents going nuts for Manu: 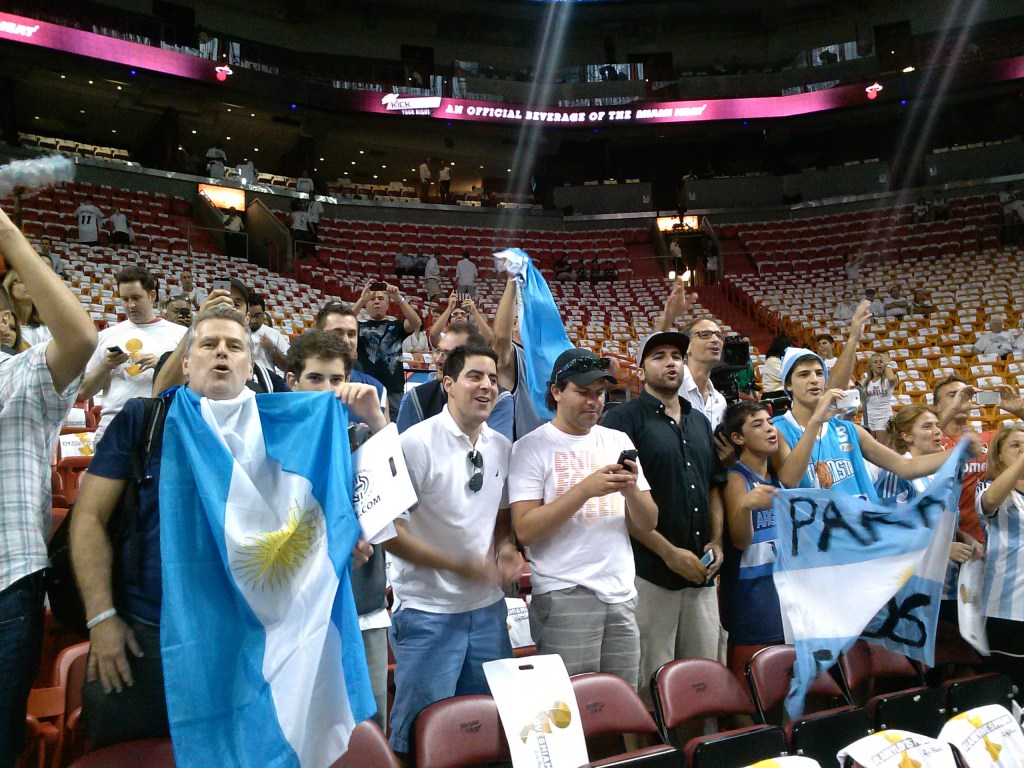 This crew was singing a variation of the famous “olé olé olé olé … olé olé” soccer chant, only with an extended “MANU, MANU” in place of the last two slower olés.

• In order to rev up the crowd before the fourth quarter, the Heat’s public-address announcer calls out to the “brothers and sisters in Miami Heat!” That feels … weird.

• If Leonard had thrown that dunk down on Birdman’s head, I think I would have just left the game.

Off to San Antonio …