NBA All-Star Weekend Winners and Losers: Featuring the Rise of John Wall and the Fall of Nick Cannon 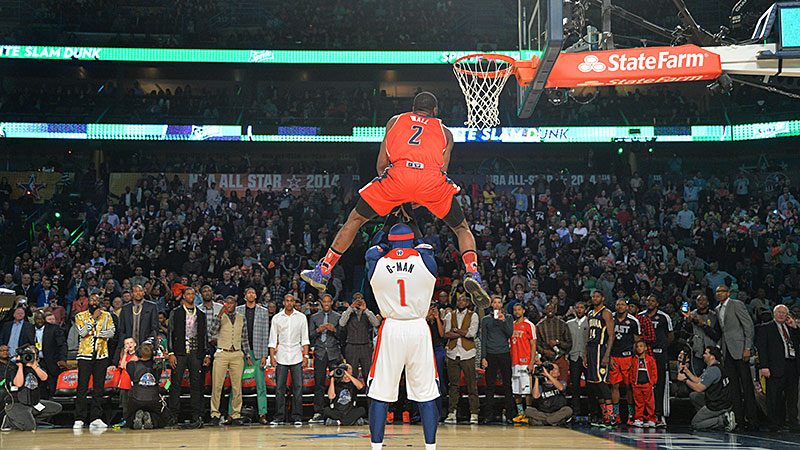 On Sunday night, the Eastern Conference won the NBA All-Star Game. It was the kind of tight, defensive affair you would expect from teams coached by Frank Vogel and Scott Brooks, if Frank Vogel and Scott Brooks were being played by Matthew McConaughey and Woody Harrelson. The East got by the West, 163-155. Kyrie Irving was named MVP, so he won that award. But who “won” All-Star Weekend? The game itself is but the culmination of a dizzying set of commitments, parties, interviews, and swag suite appearances. Through the week, Grantland staffers were watching them, evaluating them, grading them during their best and — shout-out to Drake — worst behavior. 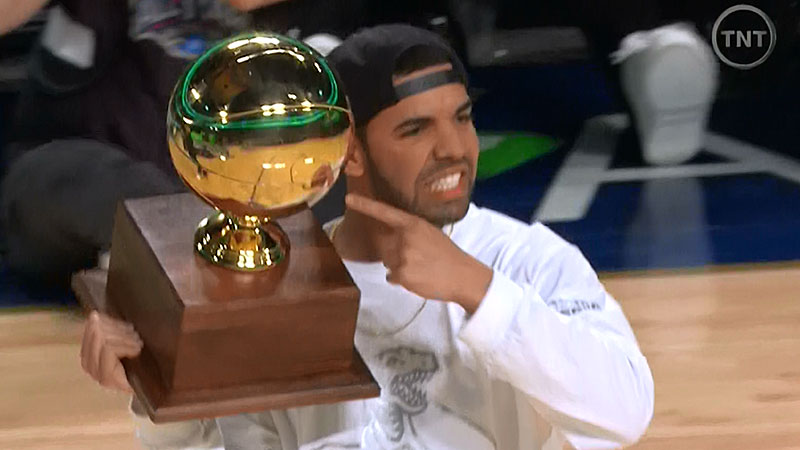 Creepy? Sure. But you can’t help it. For a member of the media, the cool thing about All-Star Weekend (a weekend that starts in earnest on Thursday) is that there are very few boundaries between you and the players you cover. After spending a few days walking around New Orleans, always, seemingly, with Kevin Willis in tow (were you following me, Kevin Willis?), I feel like I, along with my running buddies Juliet Litman and Rembert Browne, am in the best possible position to hand out some Winners and Losers trophies, saluting and shading those who succeeded and failed, both on and off the court. First, the winners … 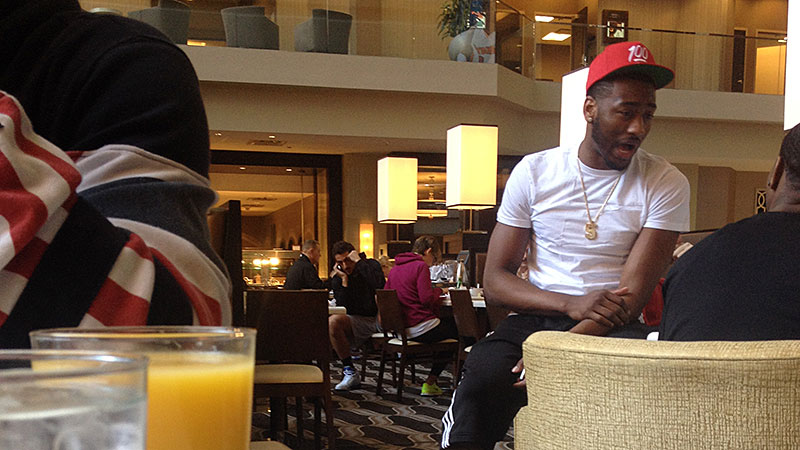 This was John Wall’s weekend. Here you see Wall, at the breakfast buffet in the Hyatt, the morning after he won the dunk contest. In the background, you can see 3-point contest winner Marco Belinelli talking on his phone. This is like a scene in a historical novel, when two famous figures just happen to be in the same men’s room. Just sub out men’s room for breakfast buffet.

I know Irving won the MVP award, but it was hard not to think of this as Wall’s weekend. After he was snubbed (I said it) by Team USA when he didn’t get an invite to the 28-man roster of players who will compete for spots in the FIBA World Cup and the next Olympic Games, it looked as if Wall were on the outside, looking in on basketball’s elite. As if there were still some sort of “Not Ready for Prime-Time” sign hanging around his neck.

This weekend, he lit that sign on fire. No, winning the dunk contest — especially one as convoluted as this one — isn’t the kind of thing that makes a career. But it put Wall in the spotlight, and he handled it incredibly well. Also, he dunked over G-Man!

Wall seemed to be enjoying himself all weekend, in a responsible way. He made time for every autograph seeker I saw approach him, hung out with friends and family in the hotel lobby, mingled with his fellow players gracefully, and was genuinely funny on the B.S. Report, especially after the cameras went off, when he was still talking trash about a hypothetical 2010 vs. 2012 Kentucky game.

Sidebar: THIS NEEDS TO HAPPEN.

So, what’s the big deal? John Wall won the dunk contest and behaved like a normal adult for the rest of the weekend. But when you consider what he’s going through in his personal life, his maturity and grace are all the more impressive.

Wall’s mother, Frances Pulley, has been dealing with various medical issues for some time. She is in the hospital to have a fluid buildup in her lungs treated. You can read all about it in this Washington Post story by Michael Lee. Wall told Lee, “I’m dealing with a lot of stuff, but she wants me to enjoy myself. She wants me to be happy … Whenever I get the opportunity, I try to call her and check on her, make sure she’s all right and try to enjoy myself. At the same time, that’s also at the back of your mind.”

If you know anything about Wall, you know how much his mother means to him, and about the role she played in turning his life around. She wasn’t able to travel to New Orleans to be with Wall this past week, but she should know he made her proud. 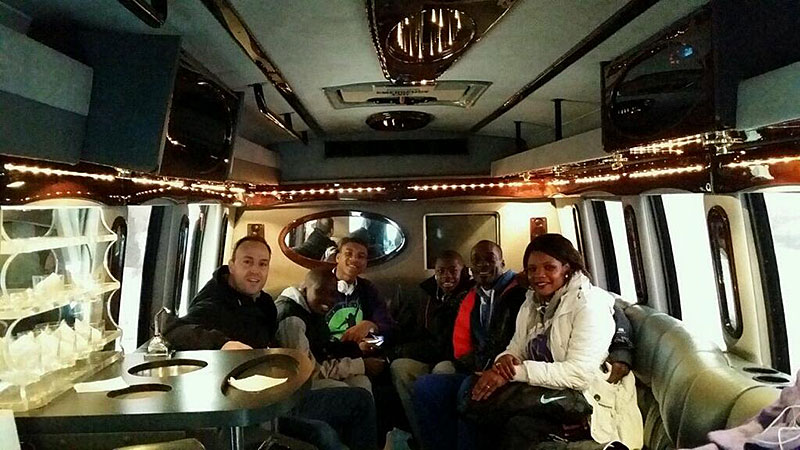 It seemed like every time I looked up, there was a member of the Antetokounmpo family walking by. Giannis was playing in the skills competition and the Rising Stars Challenge, but nearly the whole family was in town. Every time I saw the Greek Freak lope through the Hyatt with his younger brothers, Kostas and Alex, trailing right behind him, and his mother bringing up the rear, it was like a screaming comet of adorable passing through the hotel lobby. About the weekend, Giannis told the Journal Sentinel, “First of all, (I’ll remember) that it was the first all-star (weekend) that I went to with my family … It was also the first time I talked to one of my idols, Magic Johnson. It was nice. He made me feel comfortable and he’s a nice person.”

This kid is basically the physical incarnation of Pau Gasol’s Twitter feed. 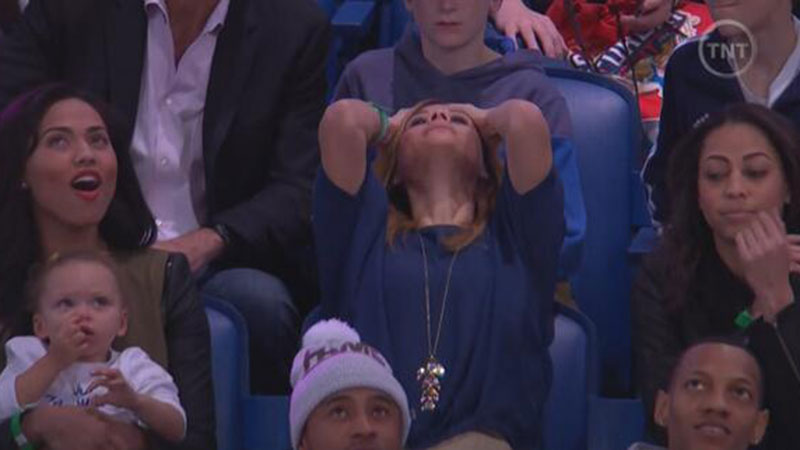 Queen of queens. From the stands during All-Star Saturday Night to walking around town with her little dog, Steph’s mom was looking like royalty. Bow down to her.

That’s Win Butler, front man for Arcade Fire, hanging out in New Orleans, wearing a crown and Dr. Dre The Chronic baseball jersey/dashiki. This dude was everywhere, showing up to DJ at yoga studios and rolling around town with Matt Bonner on a scooter … 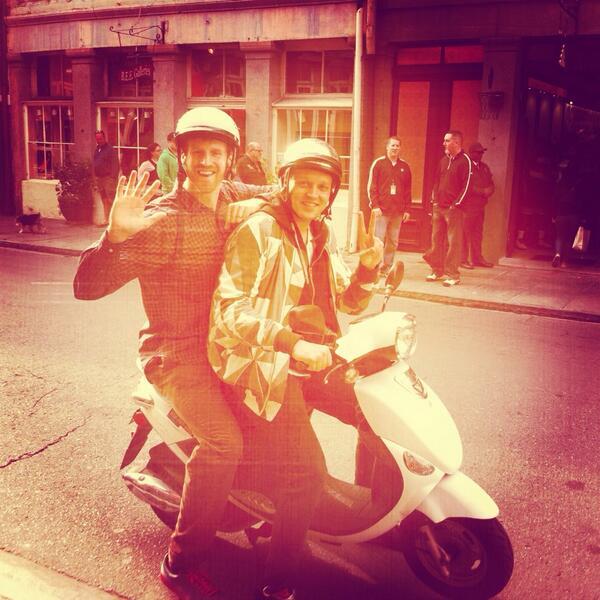 Butler was in town to DJ Matt Bonner’s Alt-Star party Saturday night. The party was for Matt and his brother Luke’s Rock On Foundation. It featured a reunion set from the Walkmen (who played “Angela Surf City” and “The Rat,” so I can die now), as well as a DJ set from Vampire Weekend’s huge Nets fan drummer, Chris Tomson, and a performance by the Lost Bayou Ramblers, who happened to be Kirk Goldsberry’s wedding band.

This party was the most fun I had all week. Tomson played “What Happened to That Boy” by Birdman, people were talking music and basketball, and the vibe at One Eyed Jacks was dive bar meets sports bar, which is the best kind of bar. Before the party, someone from the NBA asked what I was down in New Orleans for.

“Right, so what are you down in New Orleans for?”

But the Bonners did not disappoint. It was like hanging out with a bunch of friends, talking basketball and listening to Birdman. I do that basically every Saturday. This time I got to do it in New Orleans. 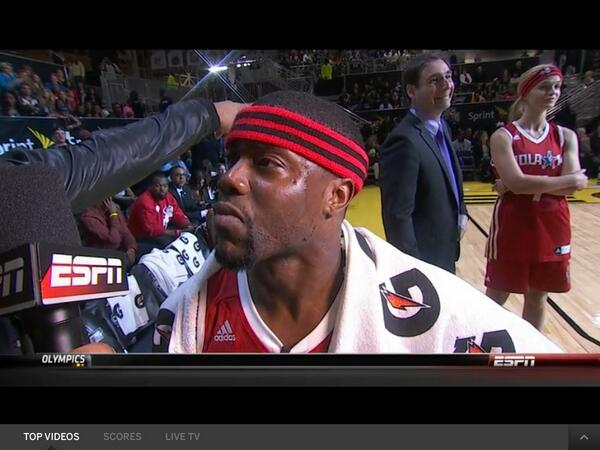 This is not slow motion. It’s Joe Motion. Let’s just say the Brooklyn Nets All-Star, already under fire for what some called an undeserved trip to New Orleans, was not at his best on All-Star Saturday Night. I actually like Joe as a player, and enjoy his end-of-game-hero-ball antics. But I think he should make a graceful exit from the 3-point shootout. Leave it to the experts, like Marco Belinelli and Bradley Beal. Rembert summed it up best, I think: “Joe Johnson continues to validate my theory that his least favorite activity is playing basketball.” 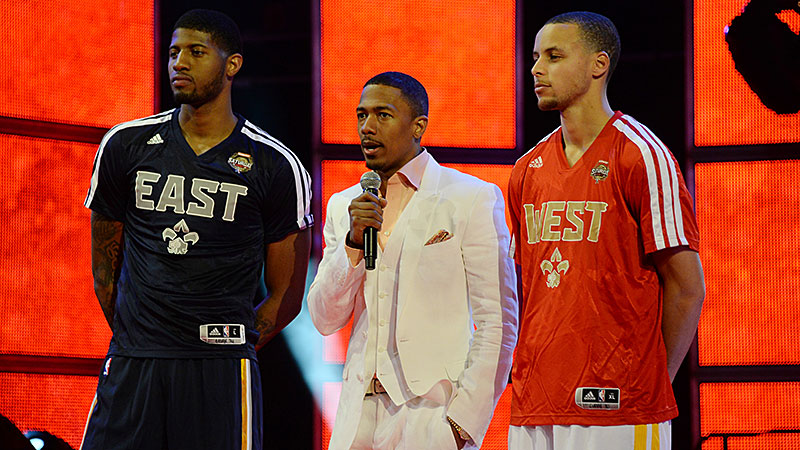 I’m agnostic about Nick Cannon, in general. He has a very diverse portfolio of entertainment products, and I choose not to sample any of them. Others do. That’s what makes this country the greatest place on earth. But sometimes you can diversify too much, and I think it’s time we had the talk about whether Nick should be the go-to host for All-Star Saturday Night.

NBA All-Star Weekend is about stamina. Can you fulfill your professional responsibilities while still attending the maximum number of gifting suites and still make time to low-key lose thousands of dollars at Harrah’s? It’s a gauntlet, and you have to run it. I have no idea how Nick Cannon spent his week. He very well could have been home reading Wolf Hall every night. But let me say this: Nick Cannon treated his hosting duties Saturday night the way Joe Johnson treated his 3-point shootout duties.

Here with an opposing viewpoint on the whole Nick Cannon situation is our own Juliet Litman:

Even though he puts everything out there, Nick Cannon is misunderstood. He is the consummate hustler. He would have been best friends with Ben and Cam in How to Make It in America. He laid out his master plan in an enlightening interview with Entertainment Weekly back in 2010 (read the Cliff’s Notes here). Who else is a TV executive, TV host, comedian, and husband to Mariah Carey? On top of all that, the revived Wild ’N Out is the highest-rated show in MTV2 history. So Nick Cannon is already a winner. There can be no debate. Thus, we can only conclude that Nick was not put in a position to succeed on Saturday night as he hosted the prelude to the slam dunk contest, and he did himself no favors with the ridiculous grin he defaulted to when he wasn’t speaking. Of course Nick Cannon seemed like an annoying hack compared with the adorable Knicks Kids Reporters. The problem wasn’t Nick himself, but what part of his voluminous talent he tapped in to. That event needed smart comedian Cannon, not the host from America’s Got Talent. Cannon once told Howard Stern that while Ryan Seacrest is richer, he is more successful. I can’t say if that’s true, but it’s the kind of statement that makes me confident that Nick Cannon will improve for next year. TEAM NICK CANNON.

There was a lot of hot debate in Section 300 of Smoothie King Arena about who should host All-Star Saturday Night. I personally think Jerry Seinfeld should do it. I think that’s what the dunk contest is really missing: observational comedy. I know one person who should not do it, though. 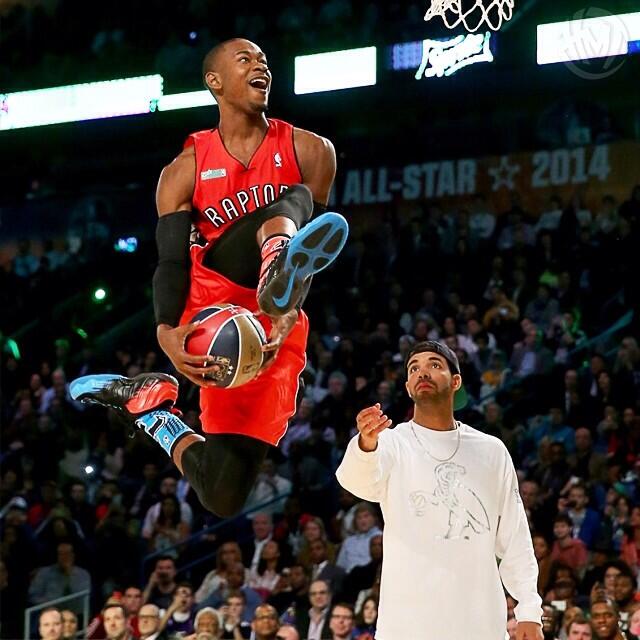 Dude, come on. Drake is out here in a long-sleeved, white OVO T-shirt with Terrence Ross’s name on the back. I’m glad he’s repping for T-Dot, but Aubrey is trying WAY TOO HARD to be the mayor of All-Star. Drizzy provided the greatest unintentional comedy moment of the week, when he decided his role as ball holder and hype man for Ross warranted a seat on the bench with the rest of the Eastern Conference’s dunk contest participants. It was some classic school-cafeteria shit. “Yo, IS THIS SEAT TAKEN, MY DUDE?” Nobody budged, and Drake — platinum recording artist, NBA team brand consultant, and one of the most popular people in the country — was given room for only half a cheek. You could practically hear John Wall ask Paul George “Who invited this guy?” from the upper deck. 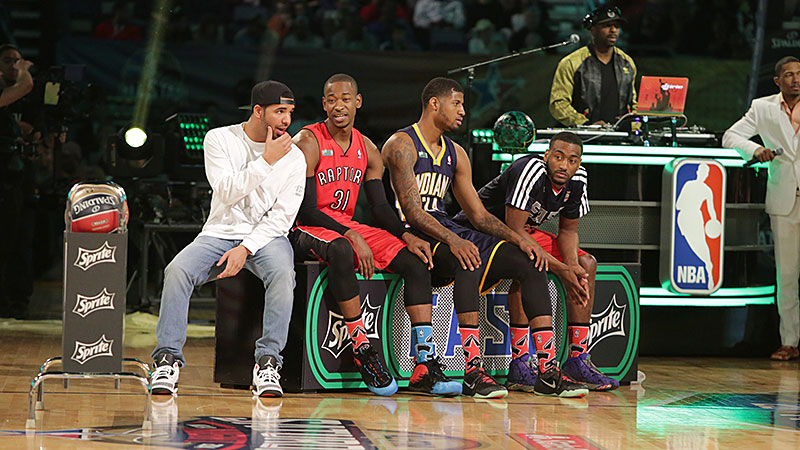 All that being said, Drake apparently killed the two shows he played last week. I love Drake. But someone on his team needs to get in his ear and tell him he’s coming off like the kid on the high school basketball team who was always too eager to be the official scorer. If there’s one thing I learned in New Orleans, man, you gotta let the game come to you.

“I’m going to measure 6 feet -- I’m 72 inches on the dot,” Manziel said during a break in his preparation for the combine. “If they want to try to jump on my shoulders and squish me down, it’s not going to be any less than that.”