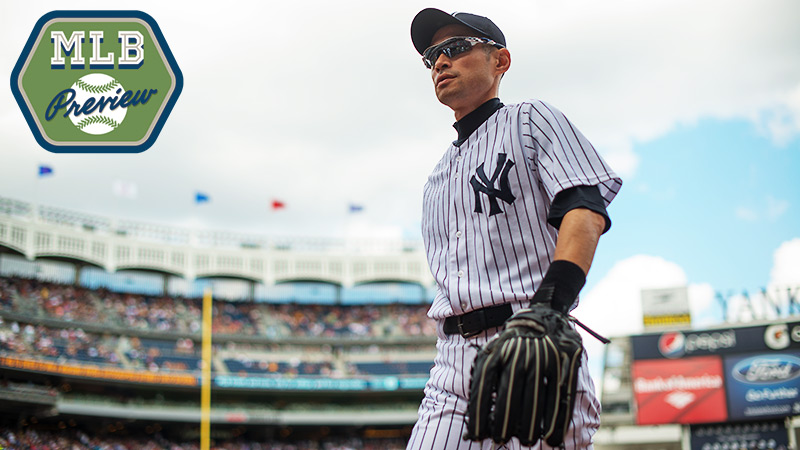 When we think about retired baseball players, really think about them, our minds typically settle on one image. Knowing those athletes will never again step on the field encourages us to remember their feats; it’s a confirmation of sorts that the heroes of the past were as awe-inspiring as today’s stars.

The specific image we recall is often an athletic play infused with historical relevance. Maybe it’s Kirk Gibson’s limp around first base or Willie Mays’s over-the-shoulder catch. Regardless, it’s what makes watching today’s Trouts and Puigs and Strasburgs so fun: We’re constantly anticipating their defining plays, but we have no way of knowing when they’ll come.

This feels relevant as Ichiro Suzuki’s closely cropped hair fades to gray. Still not retired at 40, Ichiro will be one of the five oldest position players in baseball this season, and it’s unlikely he’ll alter his legacy regardless of whatever happens next. What exactly, though, will that legacy be?

On the surface, it’s silly to suggest that Ichiro, who was bombarded by international media in 2001 when he became the first Japanese position player to make the move to MLB, was somehow overlooked. In his first season, he won the AL MVP and Rookie of the Year awards as the most visible player on a Mariners team that stormed to a league-record 116 wins.

Yet here we are 13 years later, with Ichiro ostensibly on the Yankees, a minor piece of a franchise dedicated to megacontracts and megatrades and megalomania. (And sometimes all three at once.) Baseball fans probably won’t see much of Ichiro this season unless he’s traded, a very real possibility for a $6.5 million player stuck behind Brett Gardner, free-agent acquisitions Jacoby Ellsbury and Carlos Beltran, and Alfonso Soriano, last year’s trade du jour. If Ichiro sticks with the Yankees, it’s likely his primary roles will be as a pinch runner and defensive replacement.

Though Ichiro has said he has no plans to retire after this season, we’re still drawing ominously close to the point when we’ll have to start describing him in the past tense. And so we’re forced to begin looking back, in search of his enduring image. A primary contender for that defining moment came extraordinarily early, in his eighth game with the Mariners, when he delivered a hair-raising throw from right field to third base that caught the attention of American observers, including the Seattle Post-Intelligencer’s John Hickey: “Ichiro Suzuki came up with a throw from right field that needs to be framed and hung on the wall at the Louvre next to the Mona Lisa. It was that much a thing of beauty.”

Analysts began devaluing Ichiro’s impact over time, however, even as his numbers remained gaudy. In 2004, he led the American League with 9.2 Wins Above Replacement while posting a better slash line and more hits, runs, and walks than he had in 2001 (albeit with fewer stolen bases), yet he finished seventh (!) in MVP voting. Several observers argued that Ichiro unwisely fetishized singles, deciding to rein in the surprising power he displayed during batting practice as if he were Hercules trapped inside Hermes’s body.

During each of his first 10 seasons, Ichiro collected a Gold Glove and recorded at least 200 hits, leading MLB in the latter category seven times. He was one of the best players in baseball, trailing only Albert Pujols, Alex Rodriguez, and Barry Bonds in WAR over that span.

But Ichiro spent those years in Seattle, a perennial loser with the temerity to be located on the West Coast, where games are played after a majority of the country has already gone to asleep. The national media, which waxes eloquently about the waning careers of baseball icons like Derek Jeter and Mariano Rivera, makes little mention today of Ichiro, whose heyday did not come in historic pinstripes. It’s no referendum on Jeter to wonder what portion of his legacy (including The Flip) comes down simply to location; he’s played in twice as many World Series games (38) as Ichiro has played in postseason games altogether (19).

Ichiro was behind from the start after spending nine seasons in Japan, collecting three MVPs there but curbing his career MLB statistics. Even the numbers he’s compiled in America have been critiqued, as sabermetrics has devalued the importance of batting average. Baseball novices and experts alike celebrate brute force, which has the added benefit of lasting longer than speed. The bulky extend their careers as designated hitters or hefty first basemen, while lithe athletes wither away. This is not a world with a Slap-Hitting Infield Single Derby or a movie titled 262.

It was a Hall of Fame career, though, and it’s scary to think about what the record books would say if Ichiro had spent all of his professional years in the U.S. His first MLB hit was a grounder up the middle, mocking the pitcher while bouncing enticingly over the mound. True to form, Ichiro has always stayed just out of reach. His legacy is a baseball Seurat, clearer once we take a few steps back.

Patrolling the outfield in sunglasses and stubble … tugging on his right sleeve in the batter’s box … building momentum toward first base with his own swing … scattering hits around the infield like a pinball machine. Who knows what additions this season will bring? With Ichiro, there’s not one defining image, but rather the accumulation of many. This season, let’s hope he continues adding to the palette.

Dustin Penner, who once injured himself eating pancakes, has been traded on National Pancake Day.