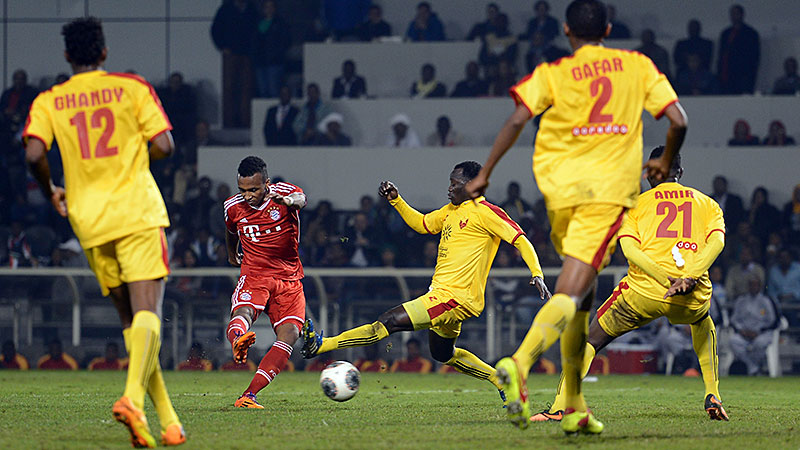 It’s becoming increasingly clear that Julian Green is a special soccer player. The 18-year-old winger already made his first-team debut for Pep Guardiola’s world-destroying Bayern Munich, and has scored nearly a goal a game for its reserve team this season. Born in Tampa, Green has lived in Germany since he was 2. He is, at worst, an exceptionally promising prospect. At best? Who knows; projecting the future of a teenage soccer phenom is an exercise in cloudy crystal-ball reading under the simplest circumstances, and Green’s situation is far from simple. He’s not Lionel Messi, but he’s closer to him than he is to Freddy Adu. Let’s just say he’s the type of player who, in the right situation, could dramatically improve the fortunes of the United States national team this summer in Brazil.

And yet, under no circumstances should Jurgen Klinsmann bring Julian Green to the World Cup as a member of the 23-man American roster.

That decision isn’t in play quite yet. In January, Green said, “I haven’t really thought about it too much. I have lots of time to make the decision. I want to focus on Bayern for now.” His club doesn’t want him playing for the Americans, which would add thousands of miles on midweek trips to Central American countries that Bayern CEO Karl-Heinz Rummenigge likely can’t find on a map.

But we’re getting closer to a point where it might happen. Green won’t play in the Americans’ match against Ukraine in Cyprus on Wednesday — to do so, he would needed to file a one-time switch, which would leave him ineligible to ever play for Germany — but he trained with the senior Stars and Stripes squad in Frankfurt earlier this week. The teenager is testing the waters. While Bayern doesn’t want him to choose the USMNT, Green’s American father very vocally does. Last month, Klinsmann — who has some serious pull when it comes to recruiting German American dual nationals — sent his assistant Andreas Herzog to Munich to speak with the youngster, indicating the coach’s interest.

Outwardly, Klinsmann seems to be happy simply to introduce the teenager to the American way of doing things. “It’s a big step for him as we try to emotionally connect him to our program, because it’s not only a World Cup coming up this summer,” he said. “Next year there’s a Gold Cup, then you have an Olympics, then you have Confederations Cup hopefully and soon comes the next World Cup around the corner in Russia.”

Even so, can’t you see Klinsmann making Green a Godfather offer? Represent the U.S. and a spot in Brazil is yours.

This would send the U.S. fan base, a group perpetually hoping a savior walks into the locker room, into a tizzy. It would also be a disastrous decision.

First of all, it’s hard to know how good Green would be come June. Yes, he has nearly limitless potential and has found success in his short career, but the step up from Bayern Munich’s reserves to the international stage is huge. It’s even harder to know how he would fit in within the U.S. team, a squad that thrives on its hard-work, cover-for-each-other system, requiring players who have an intimate understanding not just of their roles, but of their teammates’ roles too. At best, Green would get a few training days this week and a few more before its match in Mexico in April — not that Bayern would let him leave, but let’s just pretend — before rosters arrive in May. While he’d have a month to train with the team during the pre–World Cup camp, that is supposed to be a time for fitness and fine-tuning, not for introducing a player with an entirely new skill set.

And, let’s be honest here, it’s not like this is a team entirely without chemistry issues. The issues are better now, the communication between coach and players improved, but taking an untested, unproven Green at the expense of a veteran who helped the U.S. reach the World Cup might reopen old wounds. Sure, the American forward pool is thin, especially if you consider Landon Donovan and Clint Dempsey midfielders, but choosing Green isn’t worth the risk. Aron Johannsson is relatively new to the team, but he has experience in Klinsmann’s camps and in games. Terrence Boyd or Herculez Gomez could help in certain situations in Brazil. Even Mike Magee understands the U.S. program. Chemistry is a delicate thing, worth preserving at all costs.

In 1998, American coach Steve Sampson learned that Bundesliga defender David Regis was willing to play for the U.S. (Regis was eligible for citizenship because his wife was American.) On May 21 of that year, Regis passed his citizenship test and was naturalized after getting fast-tracked under a little-used clause. Days later, he played for the red, white, and blue in a friendly match against Kuwait. On June 15, he started against Germany in the first game of the World Cup. The Americans lost all three games in the tournament, finishing last out of 32 teams. That U.S. team was a disaster for any number of reasons, but the last-minute inclusion of Regis didn’t help. “It’s difficult, I won’t lie,” team leader Jeff Agoos, who lost his starting spot to Regis, said at the time. “Myself and the other guys have fought for a long time, put in a lot of blood, sweat and tears.”

Sixteen years later, the U.S. boasts a more professional, competitive, and competent roster. It’s the deepest player pool the Americans have ever had. They won’t win the World Cup, but they can get out of the Group of Death and see what happens from there. Hopefully, Julian Green likes what he sees. But he should be watching on television, not from the bench.

Sportstorialist: LeBron James and the Meaning of the Mask