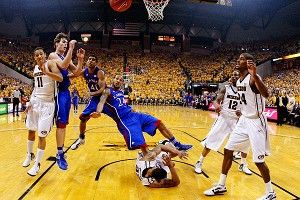 It’s come to my attention that college basketball fans prefer not to read anything negative about their favorite teams. And now that Eli Manning has ushered in the postpartisan age that President Obama could only dream of, I feel inspired to stay positive. So, for the convenience of Kansas and Missouri fans, I’ve divided this post into two distinct sections. Jayhawks fans should skip right to the second section, where I blame Saturday night’s 74-71 loss squarely on the referees. Tigers fans should read the first section, where I credit Marcus Denmon’s heroics for the epic win, and forgo section two in favor of eating an orange or being affectionate with a loved one.

In what might be the final Kansas-Missouri game in Columbia ever, the Jayhawks weathered an unbelievable shooting performance on the road to take control. With Tyshawn Taylor’s dunk at the 3:24 mark in the second half, the lead was 71-63. Insurmountable? No, but fairly safe.

And as I said, it was a hard-won lead. Missouri is one of the best teams in the country, and this matchup is the Tigers’ biggest game every year. The students turned out in force, and the stakes were even higher because Missouri is bolting for the SEC next season and the teams may never meet again on anything but a neutral floor. The Tigers matched the crowd’s energy, and as the four-factors chart shows, the execution was phenomenal:

As you see, Missouri had a higher effective field goal percentage (and shot 10-of-22 from 3), turned it over marginally less, and got to the line way more. Kansas did grab seven offensive boards, but with Thomas Robinson and Jeff Withey patrolling the interior, most teams would take that number in a heartbeat. Teams like Baylor, which conceded 14 in a blowout loss to Kansas earlier this season.

But it wasn’t quite good enough. Soldiering on through the hostility, the Jayhawks executed like they were playing at home. They held a lead (albeit a slight one) for almost the entire second half, and were on the verge of taking firm control of the Big 12. Robinson and Taylor looked like forces of nature, and the former spent the entire game (25 points, 13 boards, 11-of-17 shooting) bolstering his Player of the Year candidacy. Missouri’s best, even in a historic home game, wasn’t good enough.

Then Marcus Denmon arrived on the scene, and nothing would ever be the same.

Oops, accidental Eurythmics video. Happens to the best of us. Here was Denmon’s comeback, from 71-63:

The Tigers needed eight points, and he gave them nine. He finished with 29 points, and absolutely obliterated the slump he’d endured through most of January. Simply put, it was a legendary performance in one of the most important games in Missouri basketball history.

You ever get that nagging feeling that some refs love to make dramatic calls that favor a raucous home crowd? I’m not talking about your run-of-the-mill home-team bias, which is bound to affect any human being who doesn’t love 20,000 people booing him in unison. I’m talking about the guys who get really into it, and who seem to revel in the ecstatic roars that rain down after the whistle. You can always pick them out by two factors. First, their gestures are emphatic. They act like Tiger Woods inspiring a roar at the 18th at Augusta when they make the call. They become maestros, conducting the crowd into a frenzy for their own psychological benefit. Second, they tend to make bad calls favoring the home team in high-pressure situations.

Watch the body language of the ref in the two critical charge calls below:

I can’t stop laughing when I watch, because it looks like he’s really embracing the moment. Both times he blows the whistle multiple times to halt the action, pauses a moment to let the drama build on the court and in the crowd, and then charges forward to make the most absurdly pumped-up call ever. It reminds me of this amazing clip from The Naked Gun, where Leslie Nielsen falls so in love with the crowd noise as an umpire that his strike calls become drawn-out dance sequences.

Maybe I’m being harsh on the ref, but it looked to me like both calls were nonsense. Dick Vitale only agreed with me on the first one, but I’m not seeing a charge in either case. Thomas Robinson’s move looked like it might have been a travel, but the final quick dribble before his drop step clears him of any wrongdoing. His left foot is planted, he drops with the right, brings the left around and lays it in. Two steps.

If that bucket had counted, and perhaps a defensive foul to go along with it, Kansas would have gone up at least 73-66.

The second call was even worse. Michael Dixon essentially just leaned into Taylor as he was going up for his shot, bumping him in the process. It was an easy defensive foul call, and would have given Taylor two shots to take the lead with less than 10 seconds remaining (even without crediting Robinson’s earlier make). But it was a charge, and Kansas went on to lose by three.

The teams will play again in Lawrence later this month, and Kansas will probably have its revenge. It’ll be along the lines of what Michigan State did to Michigan on Sunday after losing in Ann Arbor earlier this year.

But this game will go down in history as the last Big 12 clash in Columbia between a pair of very old and bitter rivals, and Kansas probably deserved to win. Whether you want to credit Denmon, the referees, or both, it’s no fun to be a Jayhawk on Monday morning.

About Last Weekend: The Land of Giants