Mike Brown’s Firing Is Lunacy, But Here’s Why It Happened 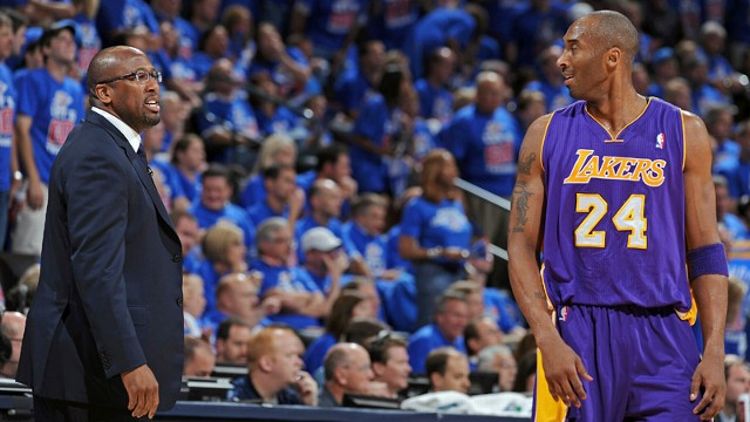 Some thoughts on the Lakers’ firing of Mike Brown before I head to Madison Square Garden to watch two teams that are actually good at basketball in the present day play a basketball game against each other:

• This is a ludicrous move, and one that clearly speaks to some broader organizational discomfort with Brown as a long-term leader — a justifiable discomfort, considering Brown’s inability to rein in his top players over two seasons, the Lakers’ shaky defense (Brown’s calling card) over that span, and the weird management of his bench.

Still: Brown has had five games to coach a totally remade roster, playing a totally new offense under an all-world point guard who has played in one and a half of those five games. Dwight Howard, the franchise’s new candy-eating, fart-spewing, wannabe humorist centerpiece, is far from peak conditioning and form as he recovers from back surgery.

To fire a coach under these circumstances this quickly is lunacy, and suggests the Lakers shouldn’t have hired him in the first place — a decision they famously chose not to run by Kobe Bryant as Jim Buss took fire to every piece of evidence Phil Jackson was ever there. Brown didn’t even last as long this season as Paul Westphal did last season on a Sacramento team that was even more dysfunctional than the current Lakers. If your commitment to a head coach and a playing style (the Princeton offense) is this thin, don’t hire Eddie Jordan as an assistant to implement that style, and don’t bring back Brown for a second go-round.

• The Lakers rank sixth in points scored per possession and 23rd in points allowed per possession, according to NBA.com. Which is to say: They stink at defense and are doing pretty well executing the pesky Princeton. The Lakers, in fact, have stunk at defense since the middle of last season. Over the last 20 games of the 2011-12 regular season, the Lakers allowed 108.1 points per 100 possessions, a mark that would have ranked dead last over the full season, even worse than the historically awful Bobcats. They were nearly as bad in the playoffs, albeit against two of the five best scoring teams in the league in the Thunder and Nuggets.

Regardless, they were bad. Some of that was due to roster limitations largely out of Brown’s control. The Lakers have had no point guard defense for at least the last half-decade. Andrew Bynum, Howard’s predecessor, was habitually lazy in transition defense and unwilling to venture above the foul line against the pick-and-roll. Lots of big men defend the pick-and-roll that way, but Brown was unable to coax elite half-court defense or passable transition defense from Bynum. Some of that goes on the coach.

The bench was and is laughably thin, the consequence of paying almost up to the luxury tax on three players — Bynum (and now Howard), Bryant, and Pau Gasol. Cost-cutting concerns and personal issues also cost the Lakers a lot of their younger and more athletic players over the years, as they said good-bye to Jordan Farmar, Shannon Brown, Lamar Odom (that one turned out fine), and others.

But Brown, a defensive specialist, could not find a top-10 defense within this roster.

• The Lakers are ditching the Princeton, according to Adrian Wojnarowski of Yahoo!, and the Lakers’ failure to grasp the motion-based read-and-react system will get the headlines here. And that’s not without merit, even as L.A. sits at no. 6 in offensive efficiency. Much of that ranking is based on one off-the-charts whitewashing of the miserable Pistons. In three of the Lakers’ five games this season, they have scored at a points-per-possession rate that would rank 20th or worse overall. Their overall ranking is fine, and the results would surely right themselves over the long haul.

But the overall ranking masks what a mess the offense has been at times, with and without Nash, arguably the greatest team offensive player of the past 10 years. The Princeton is about spacing and motion; most Lakers possessions start with four players above the 3-point arc, and there is constant screening and crisscrossing action both on and away from the ball. It is a beautiful offense when it works, and the Lakers obviously have the talent to make it work. Howard is shooting nearly 70 percent on easy looks, Gasol is a delightful high-post passer, Bryant is scoring more efficiently than ever before by working cuts to get shots closer to the rim, and Nash is a brilliant orchestrator. The team, including the ornery Kobe, appeared to buy in; after all, the Princeton is not so different from the triangle.

But the offense just looked … slow. And overcomplicated. All that motion exposed the Lakers’ age in a way, as the key players struggled to get separation while moving around the floor. You wanted to scream at the television: “You have Howard and Nash; just keep running pick-and-rolls!” Or: “Jae Crowder is guarding Pau Gasol on the left block. Stop running around like Pete Carril is screaming at you and give Pau the freaking ball!”

And that’s what happened, ultimately, on a lot of Lakers possessions. They’d end in a traditional play — a Howard baseline spin out of a post-up, a Gasol pick-and-pop jumper, some pick-and-roll combination. Sometimes those pick-and-rolls came right away, in semi-transition. But on lots of possessions, the simple action came after 15 seconds of complicated stuff, and the whole thing seemed labored.

Still: It probably would have worked in the long run, because the talent of the top four guys is just overwhelming. The Princeton, and Brown, did not get a fair chance this season. It would probably have been better than last season’s vanilla NBA offense, which ranked 10th in points per possession and featured far too much of Kobe holding the ball and taking crazy shots. Kobe shooting the Lakers out of Game 4 against Oklahoma City in the conference semifinals, as Bynum pouted and Brown looked on helplessly, was a fitting end to their season. (Yes, their season actually ended one game later, but that Game 4 fall-from-ahead loss was the killer.)

• The slowness of the Lakers hints at what might just be a structural problem that won’t go away without yet another major roster change: Pau Gasol is a center, and he’s sharing the floor with another center. That has consequences on both ends. On defense, the consequences have mostly been in transition, where the Lakers have been slow. Howard, much faster and more athletic than Bynum, would have mitigated the damage there once healthy.

But Gasol is an uneven defender against power forwards with range, and he’s never been more than average/adequate at defending the pick-and-roll up high. He likes to jump out on pick-and-roll point guards — different from Bynum’s preferred strategy — but they would often turn the corner, compromising the defense elsewhere. Gasol is adequate at big-man perimeter defense, but not great.

Gasol can make the two-center thing work on offense because he is incredibly skilled. He might be the best passing big man in the league, and his ability to thread passes through tiny spaces makes it seem at times like the Lakers’ offense is healthier than it really is. Ditto for his mid-range shooting, which is solid but not Nowitzkian.

Bryant is an average 3-point shooter, when he’s going well. Nobody pays Metta World Peace much mind on the perimeter. The net effect is that, even with perhaps the greatest shooter ever (Nash) on the floor, the spacing was often still very tight for these Lakers. It wasn’t as tight as last season, when the Lakers offered two players to ignore (small forwards and point guards) instead of just one. But it was still tight, and with two centers on hand taking up so much room, it might always be that way, Princeton or no Princeton. To watch Miami whip the ball around on possessions that start with all five players behind the 3-point arc is to wonder how the Lakers could defend them and marvel at how much space there is on the court — space to which the Lakers will never have access.

Remember, the Lakers in both their recent championship years ranked among the league’s six stingiest defenses and had Lamar Odom to break up the dual-center issue. They often closed games with Odom and Gasol as the two bigs on the floor, and as recently as 2009-10, eight of their nine most commonly used five-man lineups featured Odom at power forward and only one of Bynum/Gasol. The impact of Odom’s departure and disintegration has probably been understated. The team has never been the same since he left, and though age and chemistry and coaching all have something to do with that, the pieces just have not fit as well without a third big man to bring shooting, spacing, passing, and defense.

• Brown’s management of the bench, both this season and last, has been puzzling. World Peace began last season — lockout-compressed, I realize — as Brown’s “bench scorer,” a decision that surprised World Peace and didn’t last through January. Devin Ebanks, Andrew Goudelock, Darius Morris, Jordan Hill (after the Derek Fisher trade), Matt Barnes, Josh McRoberts, and Troy Murphy all saw their roles wax and wane, and nobody really seemed happy about it.

That’s not all on Brown. Every coach tweaks, and the taxed-out Lakers couldn’t compile a Nuggets-style 10-deep roster. But Brown was a little schizophrenic, and players publicly complained.

It continued early this season. Jodie Meeks vanished from the rotation almost immediately. World Peace was suddenly a backup shooting guard. Ebanks went in and out, and played different roles. Hey, there’s Morris again! Brown seemed to be the last person in the world to realize Antawn Jamison cannot defend small forwards or play that position credibly. This was especially strange, since Brown played him exclusively at power forward during Jamison’s brief time in Cleveland — not Brown’s high point as coach — and because Brown displayed another bit of weird positional stubbornness in basically refusing to play LeBron James at power forward in Cleveland.

There were lots of issues in play there. James was, by his own account, not as mature then as he is now, and perhaps not ready mentally to embrace the power forward role he plays today. But Erik Spoelstra convinced James to do it, whereas Brown either couldn’t, didn’t try hard enough, or didn’t think creatively enough.

• Brown is a hard worker and very well liked around the league. It’s very possible he wasn’t the right head coach for this Lakers team. But he did not get a fair chance to coach the 2012-13 Lakers.

Someone else will get that chance now, whether it’ll be Mike D’Antoni, Nate McMillan, Phil Jackson, Dwight Howard’s candy supplier, Penny Marshall, or Jerry Sloan. And that person will probably have success. The talent here is too good to fail over a large sample size. But the Lakers haven’t been an elite team since the end of the 2009-10 season — they’ve won one second-round game since — and it might be harder than we thought to get this bunch back to that level.