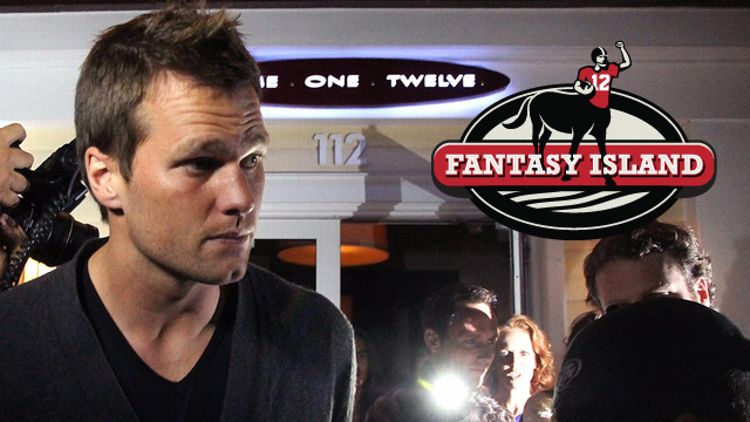 Buffalo hemorrhages 169.5 rushing yards a game and there’s a toddler-with-permanent-marker glee in Tom Brady’s eyes when he gashes open wounds, even if it means doing so via hand-offs (40 carries, 247 ground-game yards when these teams met in Week 4). There won’t be six New England turnovers this time; coupled with the running game, I’m expecting sub-par receiving lines for the Pats’ aces. Stevie Johnson has been leaving behind a data trail of ghastly box scores, including a three-catch-for-29-yards showing last week. This is largely because Ryan Fitzpatrick loves wheel routes to running backs and third-read safety-valve tosses to Scott Chandler. Donald Jones has scored every three weeks this season, and these migration patterns point to a touchdown this week.

The Jets heading across the country to the stadium formerly known as Qwest Field gives me the same feeling I get while watching an antelope drink water out of a river in nature documentaries. The Jets simply don’t have a player who can stretch the Seahawks D, and they will smother Sanchez all day en route to being one of the week’s best plays. Marshawn Lynch has seen scarier defenses this year, and the reputation of the Jets D is far more bark than bite. Lynch will roll once again, but not top 100 yards — more like 85 yards and two TDs. After the game, Rex can tell us how confident he still is in his QB, and none of us will believe him.

You’d be wise to pick up Danny Amendola, who’s flying under the average fantasy owner’s radar. Amendola may not play this week, but his return is imminent and he can aid many of those in need of a receiver. Every time I see Amendola’s Week 2 stat line (15 receptions, 150 yards, one touchdown), I grow more and more incredulous, but these are irrefutable facts we’re dealing with, so I’m about 87.3 percent sure it actually happened. Make sure you add him to your roster now so that you’re not competing with other owners for his services when he has a great game upon returning to the huddle.

How upsetting is it that Carson Palmer is such a consistently productive fantasy play? VERY VERY VERY VERY VERY UPSETTING! I HATE IT! I AM HAVING A TANTRUM ABOUT IT! Playing Palmer is like eating your spinach. You detest it, but, dammit, you have to. The fact that Darren McFadden and Mike Goodson are both injured only makes Palmer all the more spinachy good for you. GROSS!!

In other, less nauseating Raider fantasy news, Denarius Moore is still the no. 1 receiver in Oakland, but the Raiders also pulled some new names out of the hat — FB Marcel Reece (8 rec., 95 yds., 1 TD) is a sleeper pick with McFadden and Goodson out, and TE Brandon Myers (8 rec., 59 yds.) is a decent bet too. And finally … damn you, Carson Palmer! DAMN YOU TO HELL!!!

I love Greg Olsen this week. I mentioned him in my waiver wire column (FYI, those were real e-mails from Mays. I just cut out all the sexy parts. We have a weird relationship), but it needs to be said again. Denver has allowed the third most points to TEs thus far, and Greg Olsen gets the second most targets on the Cats. Pick him up and start him, unless you have a Patriots, Cowboys, Falcons, or Saints TE. In other news, neither Carolina RB is startable (heard that before?), and I don’t think Willis McGahee has a big day here, either. The Panthers have actually looked stout on D since they came off the bye. Fun fact: If the Broncos win, I will have to hear about it from my girlfriend ALL FREAKING WEEK, so c’mon Panthers, win one for Josh!

If you are an Eli Manning or Victor Cruz owner, stop panicking! Let’s hope you didn’t take a lowball trade offer after two sub-par weeks, because after playing two top-five pass defenses in two weeks, they get a Bengals D that ranks 19th and has given up at least 220 and a score to every QB they’ve faced not named Ryan Tannehill. I think Eli is a solid start here, and Victor is doing at least one salsa dance this Sunday. If you are a Hakeem Nicks owner, however, feel free to panic. The former Tar Heel hasn’t looked right since he came back, and I think he is a flex play at best. You probably have more reliable options. If I’m choosing between the Law Firm and Nicks at flex, I’m going Law Firm all day.

Brian Hartline isn’t Brandon Marshall — I know, I’m going out on quite a limb there — but Hartline will play like him on Sunday. Last week, Marshall had nine receptions, 122 yards, and three touchdowns in Tennessee, following in the footsteps of others who’ve abused the deplorable Titans secondary this season: Malcolm Floyd, Isaac Redman, and Mediocretron, to name a few. Hartline is poised to enter that pantheon, mostly because Ryan Tannehill targets him so, so much. Reggie Bush is experiencing that dastardly “regression toward the mean” thingamajig, while Daniel Thomas is getting a decent-sized chunk of Bush’s carries. Finally, I want to highlight the fact that Chris Johnson is, indeed, back, just like Notre Dame football and the female who Sir Mix-A-Lot recorded a song about.

Mikel Leshoure is the biggest sell-high candidate in the history of sell-high candidates. I know you’re probably a bit wary to take “whom to trade” advice from me, but take a gander at these numbers: 100, 26, 70, 63, 46, 70. Those are his rushing totals from the past six games, and I’m not sure (nope, I take that back, I am sure) he’s not scoring three touchdowns again. Plus you’ve got Joique “worst first name in the NFL” Bell breathing down his neck to make this thing a time-share. Sell him now! But if you can’t sell him, definitely start him this week, because now that I’ve put my “TRADE HIM NOW” stink on him, he’s in line for a 60-point day.

As far as the rest goes, it’s pretty simple: You’re starting The Staff Infection even though you don’t want to, Megatron is unbenchable, Titus Young is a risky flex play. A.P. is superhuman, Percy is a must-start if he does happen to play, and if you’re super desperate at TE (and you shouldn’t be — there are MUCH better options this week), I like Pettigrew slightly more than Kyle “The Human Zero” Rudolph.

Look, Atlanta, an 8-0 record in the tougher conference is nothing to scoff at — you guys win close games and have blossomed before America’s eyes — but even at your best we’d still rather see the inspired, sinking ship Saints out-duel you in the Super Dome. Give defensive coordinator Mike Nolan the time of day, he’ll dream up wild looks and who-done-it blitzes. Drew Brees in the no-huddle takes that imagination off the table, and that’s why we should expect to see 60 collective points, 650 collective passing yards, and maybe even a shot of Mark Ingram high-fiving his left tackle after a three-yard gain.

The good news? Philip Rivers looked great in Week 9. He went 13-13 on his first 13 passes and finished with 220 yards, two TDs, and one interception. The bad news? It was against the Chiefs, who make everyone look 40 times more competent than they actually are.

The worse news? The Chargers face Tampa Bay in Week 10 and man, the Bucs continue to materialize as a realistic fantasy option at almost every position. Josh Freeman is one of the most accurate downfield passers in the league and with Doug Martin beginning to beat teams all by himself, the passing game (V-Jax and Mike Williams) is only going to get better.

The interesting fantasy option: Danario Alexander is emerging as the WR2 behind Malcolm Floyd (3-3 for 61 yards, played 70 percent of snaps) with Eddie Royal and Robert Meachem both injured. Royal and Meachem are both expected to return to the lineup in Week 10, but both are wildly under-performing this year, and Norv Turner says Alexander has earned more looks.

My prediction for this matchup: The Cowboys will lose one of those close but unexciting games — like a 17-16 finish where neither team scores after the second quarter, no one gets into the red zone for more than an hour, and both teams’ kickers miss 40-yard field goals that might have won the game. More predictions: Both QBs will struggle with sacks, turnovers, and looking positive during the postgame press conference; Dez Bryant will sit by himself and glare conspicuously at his teammates on the sidelines after he gets two targets in the first half; Jerry Jones will continue to make ominous threats while giving dubious votes of confidence to Jason Garrett, and Garrett will in turn talk to reporters too confidently, too fast, and too much.

Re: the Eagles. They have absolutely nothing to lose. They should abandon their inhibitions, let Vick loose, and see what happens. He’s got great weapons, right? He can’t turn over the ball any more than he already does, right? Let him loose! That’s what they SHOULD do, but it turns out their leaky offensive line won’t allow it. LeSean McCoy will likely grow in value (he’s been vastly underused this year, especially in the red zone) as Vick becomes more of a game manager early.

As the seasons turn and Peanut Tillman continues to force fumbles with relative ease, one must wonder how early the Bears defense will be drafted next year. Generally, I wait until the final two rounds to take my defense and kicker, but I may have to institute an exception for 2013. First of all, the Bears defense is more exciting to watch than most offenses, and that’s my tiebreaker when evenly split between two players during a fantasy draft — who will be more fun to watch? Secondly, over the course of nine weeks, they have scored 43 more fantasy points than the year’s second-best defense (Houston). Brian Urlacher, Julius Peppers, and Tillman are the new poster children of Value Based Drafting. Get used to it.

1. Mike Wallace and Heath Miller will both score a touchdown.
2. The Steelers are the no. 1 D/ST in week 10. (Did you know the Chiefs are allowing 17.4 pts./week to D/ST’s the last five games? YIKES.)
3. Jamaal Charles will have a run longer than 50 yards. He will also have fewer than 12 carries.
4. Jon Gruden will make a comment along the lines of “Boy, that Ben Roethlisberger is one tough son of a gun.” (Going at least 1-for-10!)
5. On Tuesday, a guy I work with will tell me a heartbreaking story about how his team lost because of a garbage-time Dwayne Bowe touchdown. I will want to punch myself in the face.
6. Romeo Crennel’s laminated play sheet will be revealed to be nothing more than a Denny’s menu. He will be sad he can’t get the Moons Over My Hammy.
7. Byron Leftwich will take at least one snap. (Side note: Byron Leftwich is still in the league? Is this depth chart from 2003?)
8. One of the Pittsburgh RBs will have at least 100 yards and a score. You will leave this running back on the bench.
9. PIT 37, KC 13.
10. The Gin Blossoms will close with “Follow You Dow”— oh wait, that’s for my “’90s Band Set List Prediction Island” column, and, yes I am going to see the Gin Blossoms instead of watching this game. You should too.