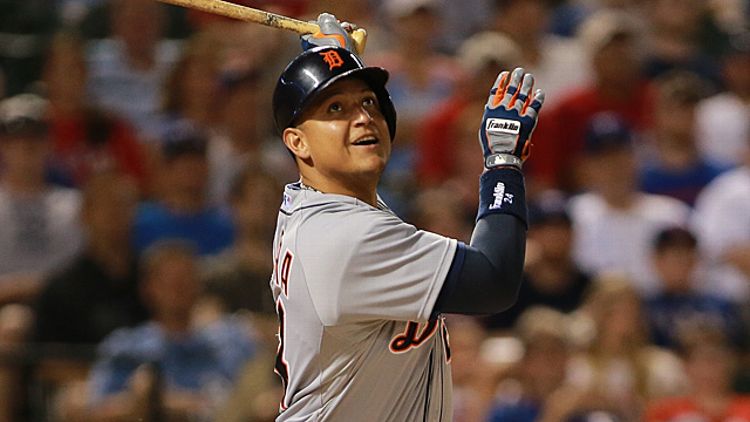 While the rest of the baseball world is talking about the Miami doctor who’s agreed to talk, indulge me for a moment as I try to interest you in a home run that was hit three weeks ago. It was May 19. The Tigers versus the Rangers in Arlington, Texas. Top of the fifth. Miguel Cabrera at the plate.

Cabrera had already hit one homer, a mammoth, three-run, 453-foot opposite-fielder off starter Derek Holland in the third inning. In the eighth he would hit another for his third of the game. But it’s that home run sandwiched in the middle that’s of interest here.

Holland had run the count full. And to get baseball’s best hitter out, he threw a 94 mph fastball on the lower, inner half of the plate. It didn’t go well.

The first thing I noticed about the home run was the thing that I imagine every baseball fan will notice. Holland flinched! It’s a quick move that lasts only some hundredths of a second. But there’s no doubt that Holland, right after Cabrera had struck the pitch, threw up both arms in what looks like an attempt to shield himself from a ball that some primal part of his brain had warned may be headed right toward him.

A pitcher reacting to the crack of the bat isn’t new. But usually that reaction can be logically traced to the result of the play. Home runs, if they elicit anything, often bring about some combination of anger, resignation, and disgust. A quick jerk of the head toward the ball, then a slump. As a rule, the balls that make pitchers flinch aren’t the same ones that end up on the other side of an outfield fence.

Cabrera’s home run broke that rule. And for good reason — no one had hit one exactly like it in years. The day after, I went to the indispensable Home Run Tracker to compare what I’d seen to what the numbers had measured. The ball had “only” gone 424 feet, good for his second-longest home run of the night. But there was one number that stood out and helped explain what happened next.

The second thing I noticed in that video was the flight of the ball. There’s a comforting sameness to the way that all home runs are televised. The action starts on one camera in the outfield that frames the pitcher, the hitter, and the plate. Then it flashes to whatever camera is filming whatever part of the park the ball is set to land in. And the ball, lofted as it is, usually does just that: lands.

Cabrera’s shot was different. As soon as that second camera angle was engaged, the ball was already visible. And rising. It looked like a low stinger splitting a fairway. Home runs are hit this way, but they’re usually frozen ropes down the line. How often do balls like that get over the center-field fence? The numbers suggest almost never.

Home Run Tracker has a measure called elevation angle, which lists the degree above horizontal at which the ball comes off the bat. And it’s a tidy way of showing that Holland’s brain was totally right to scream at Holland’s arms to FOR GOD’S SAKE GET UP and protect Holland’s face. I’ve gone back and looked at all of Home Run Tracker’s elevation-angle measurements since it was started in 2006. Cabrera’s 15.9 degrees of loft isn’t just the lowest of all non-inside-the-park home runs hit this year. No one has hit a home run that hard, that low, and that close to a pitcher in the past seven seasons.

To match what the numbers said to what I’d seen, I e-mailed Home Run Tracker founder Greg Rybarczyk. He said he couldn’t remember the last time he’d seen a home run with the same flight path, except for a vague recollection of a Dave Winfield shot in Yankee Stadium in the ’80s. “I can say that this is the first homer I’ve seen where I noticed the pitcher genuinely flinch after the ball came off the bat,” he wrote. “Not a reaction of annoyance, but actually ducking a bit.”

Of course, not an hour after I’d sent Rybarczyk that e-mail I found this clip of the second-lowest home run hit this season: a shot off the bat of Braves third baseman Chris Johnson that, yes, does appear to make Pirates pitcher Jeff Locke flinch. The first lesson is that even a guy obsessed with home runs is going to miss a few details now and then. The second lesson is that reporting can be a real bummer sometimes.

The talk surrounding Cabrera is that he’s put himself in position to do something no one has ever done: win the Triple Crown two years in a row. Impressive as that may be, though, it’s how he’s put himself in that position that’s more remarkable, by hitting balls no one has ever seen before. Just ask Derek Holland. Or me — because nearly three weeks later I’m still clicking refresh.

How Disappointing Was Your Team's NHL Playoff Run This Year?