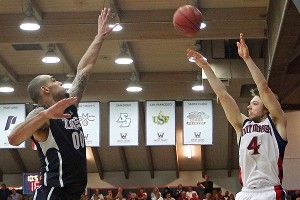 Coming into the season, there were two things I vaguely remembered about Saint Mary’s:

1. For whatever reason, they have a lot of players from Australia.

2. They have that scruffy guy with the scariest/greatest mouth guard in the history of the game.

I enjoyed these eccentric facts, and I’m happy to report that both are still true. Four players on Saint Mary’s roster, including two starters, hail from the land where women glow and men plunder. And junior point guard Matthew Dellavedova, himself an Aussie, is leading the team in scoring while still wearing the famous mouth guard.

This has been your mid-major primer on the Saint Mary’s Gaels. Thanks for reading, and have a great weekend!

Hey, I was totally kidding about being done. Ha! Come on, you crazy readers, get back here. There’s wayyyy more to cover.

At 22-2, and 11-0 in the West Coast Conference, the Gaels are the no. 16 team in the country. The two losses came to Denver on the road in late November, and Baylor on a neutral floor just before Christmas.

Dellavedova (which literally translates to “the teeth of the leopard,” maybe) leads the team with 15.5 points and 6.4 assists per game. He also shoots 40 percent from 3-point range and 82 percent from the line. From this interview, I also learned some other fun facts about “Delly.”

Delly is joined by senior transfer Rob Jones, who — I shit you not — is the grandson of Jim Jones. As in, Jim Jones who led the Jonestown Massacre, the mass suicide of more than 900 members of the People’s Temple in Guyana. In all seriousness, Rob Jones’ story is one of the most incredible things happening in college basketball right now. A great ESPN feature was written about him four years ago, detailing his fascinating family history. His father Jim Jr., an adopted son of Jim Jones, was down in Guyana with the People’s Temple. He helped organize a basketball team, and they were invited to play in a tournament against regional national teams in Georgetown, the capital.

The day they arrived, news came down that U.S. Rep. Leo Ryan was coming down to investigate the colony. Jim Jones demanded that the basketball team return, but Jim Jr. and the other players refused. As the People’s Temple team lost their first two games, Ryan arrived at the colony. When he tried to leave three days later with some some members of the Temple, he was gunned down at the airport. That same day, Jim Jones encouraged his followers to drink a grape-flavored beverage with cyanide. Only about 10 members escaped death. If Jim Jr. and his teammates had been there, they likely would have died as well.

But they didn’t, and now his son, the 6-foot-6 Jones, is the second-leading scorer on the Saint Mary’s Gaels, averaging 14.8 points per game and 10.7 rebounds.

The Gaels were media darlings in 2010, when they upset Gonzaga for the WCC tournament championship and then defeated Richmond and Villanova to reach the Sweet 16. When coach Randy Bennett took over for the 2001-02 season, he inherited a 2-27 team. The turnaround came very quickly, and part of the success was the way he recruited in Australia. He’s now made three NCAA tournament appearances in his decade at the helm, but 2010 was the only year the Gaels advanced past the first round.

In a conference dominated by Gonzaga, Saint Mary’s hasn’t won an outright regular-season WCC championship since 1989 (they’ve shared the title twice). At 11-0 this season, with a victory against Gonzaga and a two-game cushion, they look poised to end that dry spell.

At the moment, the Gaels have the 11th-most-efficient offense in the country and shoot very well from inside the 3-point arc. They’re a relatively small team, but they still attack the glass well on both ends of the floor. On defense, their weakness is forcing turnovers and defending the 3, but they excel at preventing second chances and keeping opponents off the line. Jones, in particular, is one of the best defensive rebounders in the country.

This is a team that can beat anyone on a given night, but could have trouble with size, as the 72-59 loss to Baylor showed. In that game, the Bears grabbed offensive rebounds on 42.9 percent of all missed shots.

February 9 at Gonzaga — rematch of a relatively easy home win.

February 18 at Murray State — A gem of a bracket-buster game. Saint Mary’s is the last best hope to end Murray State’s undefeated season, but they’ll have to do it on the road.

They have a guy named Stephen Holt. Or, as he’s know to his pals, STEVE HOLT!

Draw It Up: Giants' Counter Scheme