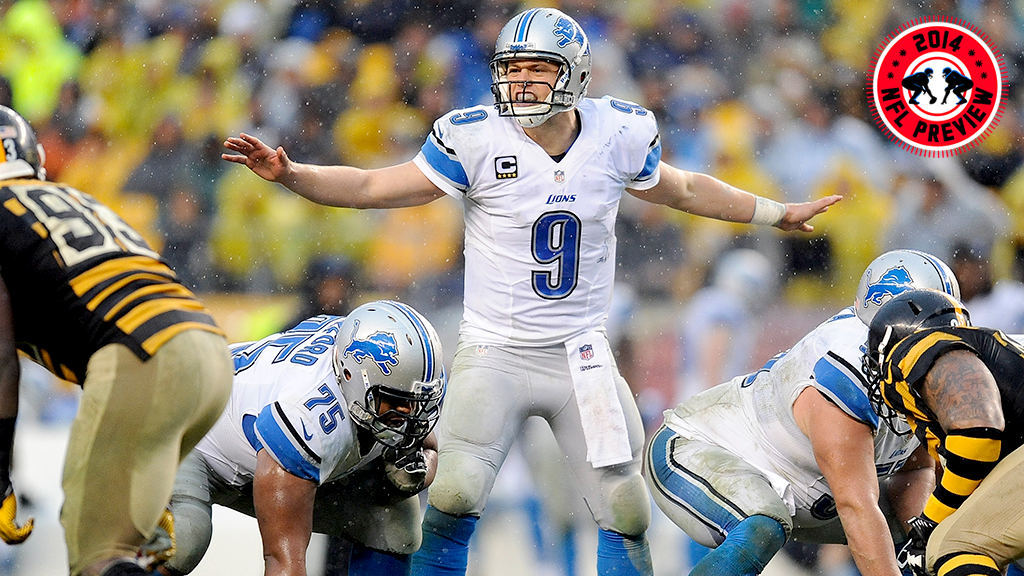 When Bill Barnwell laid out his plans for QB Crossroads Week to the rest of the staff during our NFL preview meeting, there was some surprise that Matthew Stafford wasn’t invited to the party. Based on the theme established with the other entrants, Barnwell was technically right not to include the Lions passer. At the time, Andy Dalton, Ryan Tannehill, and Barnwell’s Friday subject were all quarterbacks who were still on their rookie contracts. Teams could either commit to them or move on and hit the organizational reset button.

Stafford and the Lions are long past that point. Detroit made its choice, handing him a three-year, $53 million extension before last season. This is a different kind of crossroads: How good can this guy really be?

This sort of curiosity has surrounded Stafford for a while. After he threw 41 touchdowns and brought the Lions to the playoffs in his first full year as a starter, it seemed like Stafford would be making regular Pro Bowl trips for a long time. He’s fallen back to earth a bit in the past two years, with his completion percentage again dropping below 60 (it was 63.5 during the 2011 season) and his number of touchdowns failing to hit hit even 30 in either year. Last season, he threw 19 interceptions, the sixth-highest total in the league, and his QBR was 18th among qualifying quarterbacks. In a lot of ways, he’s been a fairly average player.

Still, there’s always the promise of a better tomorrow. Fantasy football has a role in that. In then–offensive coordinator Scott Linehan’s pass-heavy offense, Stafford’s raw totals were always going to look more impressive than the finer points of his play (only Drew Brees has thrown for more yards in the past three seasons combined). The intrigue has always been about more than stats, though.

Stafford was the best quarterback in the country coming out of Highland Park High School in Dallas. He started from day one at Georgia, and he was the rightful no. 1 pick back in the 2009 draft. At every step, Stafford has always looked like the most talented quarterback around. The thing is, none of that has really changed, down to his haircut. There are still those moments when Stafford looks like a quarterback sent back in time to destroy us. It’s that disconnect, between how good Stafford can look and how average the final product usually is, that drives the fascination.

What do I mean when I say Stafford looks like a talented quarterback? I mean his arm could probably defend Earth from an alien invasion.

This throw is absurd. The ball absolutely explodes off Stafford’s hand. Arm strength has been and will continue to be overrated in its importance for pro quarterbacks, but it does give Stafford some advantages other quarterbacks don’t have. He can fit balls through windows that others can’t, often in the middle of the field, like he’s doing here. The ball gets on his receivers instantly, and if it’s a quickly released, first-read throw, it typically allows for yards after the catch. We know all that, though. We’ve known it for almost a decade.

What’s unique about Stafford’s arm strength is that it plays into one of his less talked about but just as crucial skills. Matthew Stafford gets the ball out quick. Only Peyton Manning was sacked fewer times and less often than Stafford a year ago. The Lions’ offensive line is solid, but Stafford helps boost those protection numbers the same way Manning does for the Broncos. According to Pro Football Focus, only 9.6 percent of Stafford’s dropbacks lasted longer than 3.6 seconds — the fourth-lowest rate in the league.

Occasionally, he puts a little too much mustard on it. This year’s Football Outsiders Almanac credited the Lions with more drops last year (46) than any other team in the league. That doesn’t solely have to do with the volume of throws, either. Detroit also dropped the highest percentage of total throws.

A little more digging into the length-of-dropback stats starts to uncover the areas where Stafford tends to struggle. As Barnwell wrote about regarding Andy Dalton, some quarterbacks are particularly bothered by pressure — they don’t like having to get the ball out sooner than they want. Part of Stafford’s trouble comes when he throws later than he wants.

Over the past three seasons, Stafford’s QBR on passes thrown between 2 and 2.4 seconds after the snap was 73.6, the 14th-best figure in that stretch, and just above the league average of 72.2, according to ESPN Stats & Info. Between 2.5 and 2.9 seconds, when quarterbacks get a little more time for plays to develop, the league-average QBR increases about four points. Stafford’s drops, to 68.3 (22nd).

Linehan’s offense in Detroit was based on a lot of quick passes. Only two quarterbacks had a higher percentage of throws come between 2.1 and 2.5 seconds after the snap than Stafford. With Stafford lined up in the shotgun almost all the time last year (more than 85 percent of dropbacks, according to PFF, fifth-highest in the league), the timing on those passes was pretty consistent. Typically, that 2.5-second mark is when the ball was designed to come out on all those slants and ins that the Lions were running. After that span of time was when some problems started to arise.

That’s usually when Stafford would have to adjust, both his choice of receiver and his body.

This is a throw from the Lions’ loss to Tampa Bay. It was probably the low point of Stafford’s season. Initially, Stafford is looking for tight end Brandon Pettigrew coming over the middle of the field. Just as he’s pulling the trigger, he changes his mind and fires across his body to Nate Burleson. Nothing changes except the target. Stafford’s left foot is pointing straight up the hashmark, rather than toward his receiver, and the ball ends up about two yards farther to the right than intended. It deflects off the defensive back’s hands and straight into the arms of Lavonte David for one of Stafford’s four interceptions on the day.

Of Stafford’s 19 picks last season, 11 came after he’d held the ball for at least 2.6 seconds. That’s more than half of his interceptions, even though those throws comprised only 33 percent of Stafford’s dropbacks.

When people are criticizing Stafford’s mechanics, they often point to his insistence on delivering a lot of passes with that awkward, sidearm delivery. I’m guessing that’s not how Tom House is teaching his guys how to throw, but as you can see on that first bullet to Calvin Johnson, Stafford can make it work. It’s when the other factors go awry that the sidearm approach starts to hurt him.

Take a look at this throw against the Browns. This play is a little different, because Stafford has some rushers in his face, but the takeaway is the same. It’s a play in which he has to reset because his timing and primary options are disrupted, and again, he has trouble. After stepping up in the pocket, Stafford still has room to step into this throw, but his left foot is stationary from the time he stops moving all the way until he throws. And again, the ball sails right. The sidearm delivery is an easy target for criticism, but the problem is just as much in what Stafford is doing with his feet.

Here’s a similar type of play, in which the quarterback is forced to navigate the pocket to find a clean window to make a throw. The difference is that after Drew Brees finds his window, he gets his feet back under him, takes a step toward his target, and puts the ball right where he wants it to go.

Comparing Stafford and Brees actually makes sense in a few different ways. One theory — which I’ll admit I’m taking from a conversation with Chris Brown about Stafford earlier this week — is that the reason Brees is so good at organizing himself before he throws is because he has to be. At barely 6 feet, the finer points of quarterbacking have always mattered more for him. Stafford has a strong arm because his right shoulder might be made of adamantium; Brees has decent arm strength because he consistently throws with his whole body. Stafford’s throwing sidearm isn’t the cause of his problems, but it’s symptomatic of his tendency to fall into bad habits because he’s always had the ability to overcome them.

Both Stafford and Brees get the ball out quick, and both the Lions and Saints have consistently ranked near the bottom of the league in sacks allowed. By all accounts, Stafford, like Brees, has a grasp for the mental side of the position that rivals just about anyone’s.

If all that weren’t enough, Stafford will now get some of the same coaching that Brees has received. After five seasons as Brees’s position coach in New Orleans, Joe Lombardi is taking over as the Lions’ offensive coordinator.

There are likely to be some substantial changes to how Detroit’s offense looks, including much less shotgun (New Orleans lined up that way 48 percent of the time last year, 26th in the league) and more slow-developing plays (the Saints are consistently near the top of the league in play-action passes). The challenge for Lombardi (and new coach Jim Caldwell) is going to be pushing Stafford closer to Brees in every other area of the game. Suggesting that Stafford might be able to fix his footwork and some of his other fundamental issues at this point in his career might be a stretch, but it’s worth remembering that Stafford is still only 26 — three months younger than Colin Kaepernick. He is not a finished product.

Detroit made several significant changes in the offseason, from taking tight end and match horror Eric Ebron with the 10th pick and signing Golden Tate in free agency. More Tate means less Kris Durham and some help with that drops problem; only four players in the league had a lower drop rate than Tate last year. Add those two to Calvin Johnson, the very underrated Joique Bell, and Reggie Bush, who knows the Sean Payton offense quite well, and Stafford may have the best collection of talent he’s ever had in Detroit.

He’s always had the arm, now he has the arsenal. Let’s see what he can do with it.

A B1G Prediction for the 2014 Wisconsin Badgers