A B1G Prediction for the 2014 Wisconsin Badgers 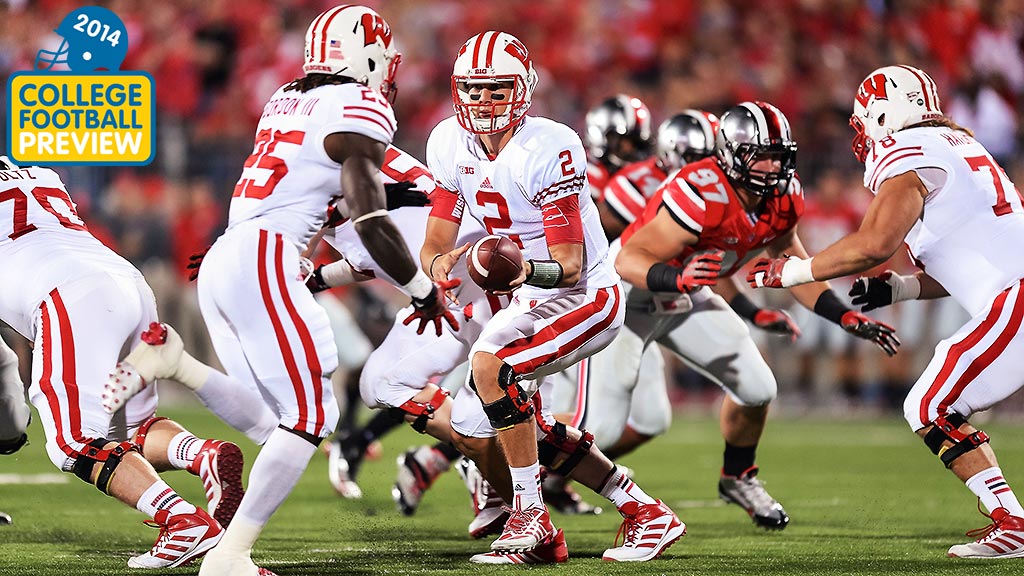 Perhaps the biggest worry, however, is Wisconsin’s ability to win close games. In contests decided by a touchdown or less, the Badgers went 0-3 last season. They lost at Arizona State after some terrible officiating in the closing minutes, then failed to seal tight games against Ohio State and Penn State. In fact, the Badgers didn’t win a single close game in 2013, and the last time they managed a victory by a touchdown or less was against Utah State on September 15, 2012, when current Wisconsin boss Gary Andersen was coaching on the opposite sideline.

Two factors, however, invalidate those concerns. A look at the data reveals that failing to win close games one year doesn’t doom a team to failure moving forward, while an immensely favorable schedule should help Wisconsin conquer its personnel woes. It could all add up to a surprising switch from also-ran to Big Ten champion for the Badgers.

The Randomness of Close Games

It’s reasonable to assume that winning close games is a skill: The quarterback engineers a late drive for the winning score; the defense holds for a goal-line stand in the waning seconds; the kicker comes through from a distance.

However, it’s also a mistake. Before criticizing Wisconsin for lacking the clutch gene, consider whether winning close games is really a repeatable skill year to year. If we define a close game as one in which the final margin of victory is a touchdown or less, then 13 college football teams won all of their close games in 2012. In 2013, those same teams went 28-23 in close games.

For an example of how a team’s close-game fortunes can change, let’s look at Florida, one of the aforementioned “clutch” teams from 2012. The Gators went 3-0 in close games that year, which helped propel them to an 11-2 record and Sugar Bowl berth. In 2013, however, they fell to 0-4 in close games and finished with a 4-8 record overall. Luck wasn’t the only factor; Will Muschamp’s team struggled with injuries on defense and poor quarterback play. Still, the Gators hung with South Carolina and Georgia, and if they’d managed to win half of their close games, they would have earned a bowl bid.

Regression to the mean doesn’t mean that Wisconsin will win all of its close games this season. But it does mean that last year’s 0-3 record should have no bearing on evaluating the Badgers’ prospects for this season. In close games in 2014, Wisconsin will have a 50-50 chance to win. (For more on this idea, check out Bill Barnwell’s recent piece on the Houston Texans’ rebound prospects.)

Of course, the close-game concerns might prove moot for another reason: Based on its Big Ten slate, Wisconsin might not even have many close conference games this year.

When the Big Ten agreed to add Rutgers and Maryland as football piñatas this season, it rearranged (and renamed!) the divisions by geography. This is a huge boon for Wisconsin, which no longer shares a division with perennial Big Ten heavyweight Ohio State.

To evaluate the West division in which Wisconsin will play, let’s first take stock of those teams’ places in the national landscape. On my website, The Power Rank, I compile my preseason rankings using a regression model that considers a team’s performance over the last four years, its turnovers in each of those seasons, and its returning starters for 2014. In previous seasons, this model has successfully predicted 70.5 percent of game winners.

Of West Division teams, Wisconsin is ranked the highest, at no. 15 nationally. There’s a steep drop-off to the next Big Ten West team, no. 37 Iowa, which lost all three starting linebackers from last season’s excellent defense. Northwestern and Nebraska check in at no. 44 and no. 45, respectively. The preseason Coaches’ Poll has Wisconsin at no. 14, Nebraska at no. 22, and Iowa, Minnesota, and Northwestern in the “others receiving votes” category.

Wisconsin simply won’t face tough competition in its division, and its cross-division slate is as favorable as it could possibly be, with games against Maryland and Rutgers, who rank 54th and 63rd, respectively, in my preseason rankings (the worst among East Division teams).

Thanks to that incredibly favorable conference slate, my simulations show Wisconsin winning the West division 43 percent of the time. 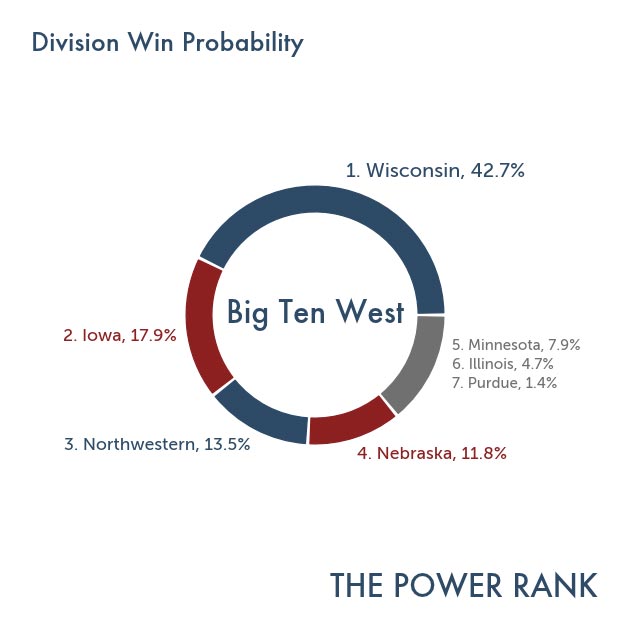 Most preseason polls have Ohio State (no. 13 in my rankings) as the top Big Ten team, above Wisconsin. However, while the Buckeyes may have more talent, they also face a much tougher regular-season road because they play in the East, where they’ll face fellow top-25 teams Michigan State (no. 16) and Michigan (no. 19). If Ohio State and Wisconsin meet in the Big Ten title game, plenty of prognosticators will pick the loaded Buckeyes. But when we’re this far out, it’s all about the odds of even getting to that point, and Wisconsin’s road is considerably easier than Ohio State’s. In my East Division simulation, Ohio State has a 33 percent chance to best the Wolverines and Spartans and claim the crown. However, since Wisconsin’s West odds are higher than that, it means Wisconsin has a higher probability of winning the entire conference. 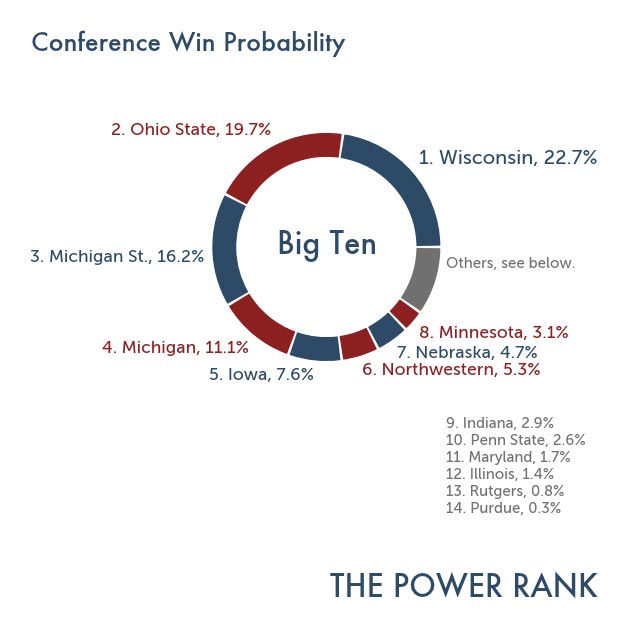 Wisconsin is a lot like the 2013-14 Miami Heat: not necessarily the best team overall, but the one with the clearest path to the title game. It didn’t work out for the Heat in the end, and it might not for the Badgers, but the odds are in Wisconsin’s favor at this point. Now that we know that the close-game concerns are moot, we shouldn’t ignore the edge that scheduling gives the Badgers in the 2014 Big Ten race.