Look Out, the Lightning Are Playing Up to Their Potential 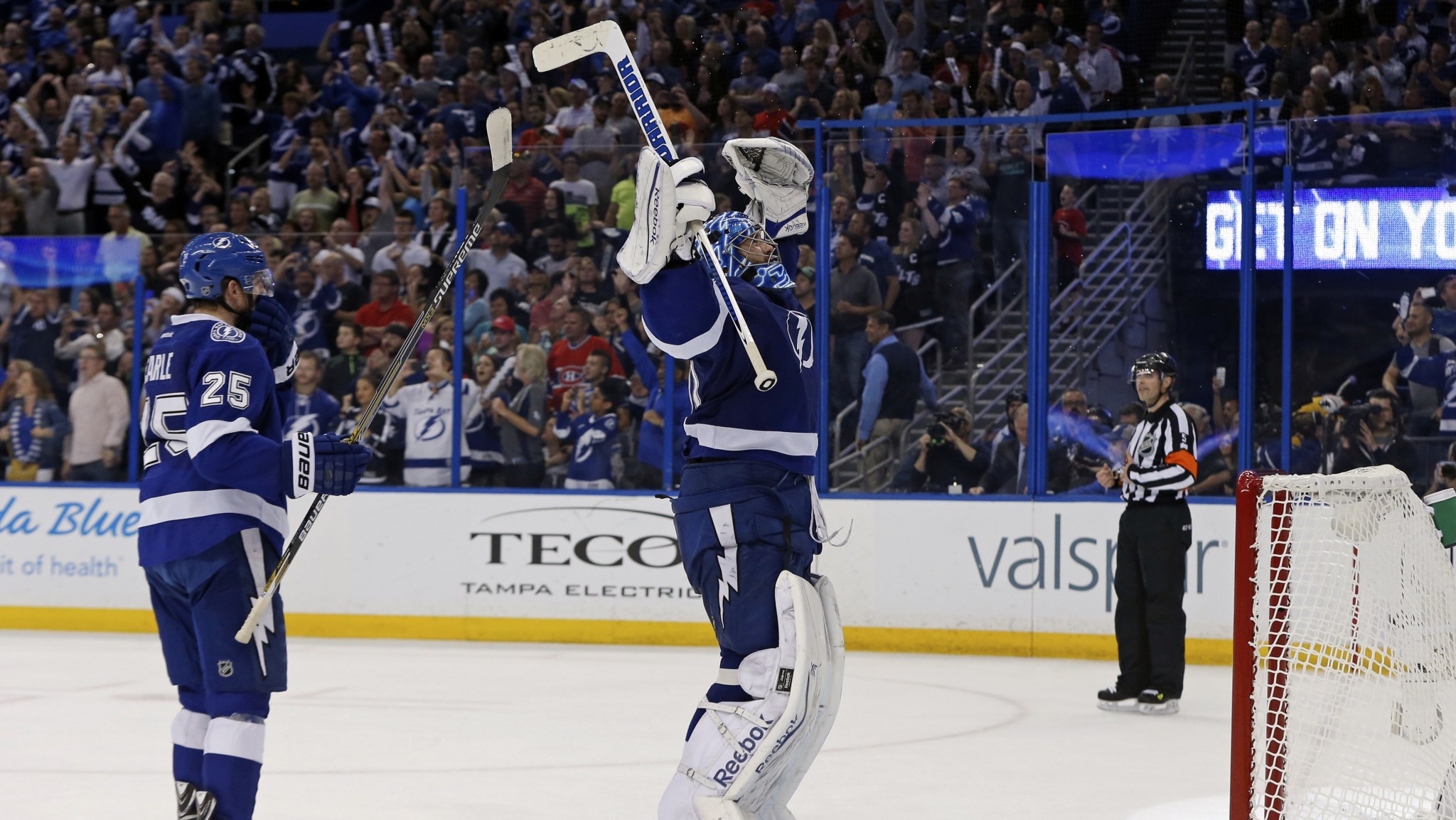 We’ve always known what this year’s version of the Tampa Bay Lightning could do. One look at the roster was enough for that, and if you caught them on a good night, the highlight reel would drive it home. What they could do has never been in doubt; we’ve just been waiting to see them do it consistently enough to be considered a legitimate contender for the Stanley Cup.

So did we learn anything last night? Maybe not. On paper, the Lightning are one of the league’s best young teams. We’ve known that since last year, when they ended a two-year playoff drought with a 101-point season before being swept by the Canadiens in the opening round.1 We knew it when general manager Steve Yzerman spent the offseason patching over all the roster’s visible holes, rebuilding the blue line and adding depth up front. We knew it during the regular season, as they racked up 108 points while posting the second-best goal differential in the league.

And we knew it during the first three games of the series, as the Lightning opened up a 3-0 lead thanks to two close wins and a blowout. Then we tried not to forget everything we knew as Montreal clawed its way back into the series, posting a dominating win in Game 4 and then holding on for a narrow Game 5 win at home. Suddenly, the Canadiens had the momentum, and there was a sense of history in the air. Or at least there was until Game 6 started, when the Lightning looked like champions.

Maybe the most impressive aspect of the Lightning win last night was that they ran over Montreal without their best lineup. They did it without Ryan Callahan, the veteran winger who underwent an emergency appendectomy on Monday. They did it without Jonathan Drouin, the third overall pick from the 2013 draft who the team seems to have lost faith in; he was a healthy scratch in all but two games in the series.

And perhaps most impressively, they did it without Steven Stamkos. Oh sure, the Lightning captain was in the lineup last night. He even scored the second goal, snapping one past Carey Price five minutes into the second. But that was a Steven Stamkos; it wasn’t the Steven Stamkos. That Stamkos is borderline unstoppable; the one we got in this series was stoppable. Throughout the postseason, he’s never looked quite right. He’s not listed on the injury report, but if the Lightning season ends and we find out he’s been playing through something and is headed off for surgery, nobody will be surprised.

And yet, half of Stamkos was enough for Tampa Bay in this series. That speaks to the depth this team has put around him, the guys like Tyler Johnson and Ondrej Palat and Nikita Kucherov. On the opening goal, Kucherov tipped Palat’s feed past Price, and Kucherov later added an empty-netter. Palat scored the 3-0 marker, and Johnson’s key goals this postseason have him solidly in the Conn Smythe picture.

All three of those guys were rookies last year. They’re going to get better, just like 24-year-old defensive stud Victor Hedman will get better. The Lightning are one of the youngest teams in the league. And that’s what made them so hard to project.

This is absolutely a team that’s been built to win the Stanley Cup. That’s not news. The question has always been: When? Because while we know what the Lightning can do, we’re still not sure what they can be. Not yet. Not even right now, halfway to 16 wins. Conventional wisdom says a team needs a deep push or two into the postseason before it really learns how to win, so maybe that will be the Lightning’s fate this year. Then again, every now and then a team skips that whole near-miss phase altogether and goes straight to the front of the line. Can the Lightning be one of those teams? Right now, we just don’t know.

Here’s what we do know. They can handle the physical side; Brenden Morrow reminded Alexei Emelin of that in the second, crushing him in the corner with a clean hit.2 They’ve got the goaltending, or at least they have it most nights — despite all the well-deserved accolades for Price, Ben Bishop outplayed him over the course of the series. They’re well coached, with Jon Cooper quickly establishing himself as perhaps the best young coach in the league. They can even get lucky, as bitter Habs fans will remind you after watching their team hit the post over and over again throughout the series. That last one isn’t exactly a skill, but at this time of year it sure helps.

And they can play defense, at least occasionally. After being badly outshot through most of the series, the Lightning came together to dominate a desperate Canadiens team last night, at one point going more than 10 minutes without allowing a shot on goal. On paper, defense is supposed to be the weakness in Tampa Bay, and that fits in nicely with the predefined narrative: the cocky young gun who hasn’t quite figured out how to play a two-way game. If this game is what they’re capable of, the rest of the league is in trouble.

We’ll start finding out soon enough, with the Eastern Conference final presumably starting Saturday night. The Lightning might play the Capitals, which would be like looking in a mirror: It’s a young team led by the flashy goal-scoring superstar and good-but-maybe-not-quite-elite-just-yet goaltender. Or the Lightning might get the Rangers, in which case, well, remember all of this stuff? The story lines won’t take much work. Beating the Lightning sure will, at least if last night’s effort was any indication

Either way, we know what the Tampa Bay Lightning can do. Starting this weekend, we get a chance to find out what they’re going to be.

We Don’t Need an Ace: How the Cardinals Have Kept Winning Without Adam Wainwright