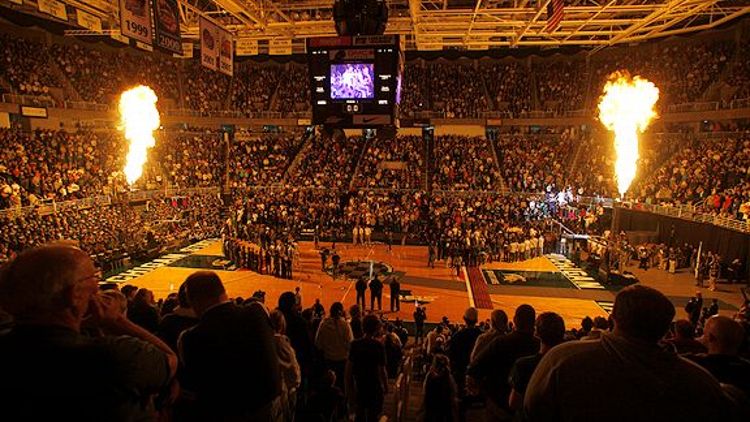 After waiting for what has felt like an eternity, the most unnecessary, absurd, and laughable day of the year in sports has finally arrived and I couldn’t be more excited about it. Based on that last sentence, most of you are probably confused as to why I’m excited about the WNBA draft or why the WNBA is holding its draft on a Friday in October. Well, this might come as a bit of a surprise, but I’m actually not referring to the WNBA at all. No, I’m talking about today being the first day of official practice for college basketball teams, which means tonight is when many teams around the country take part in a little something called Midnight Madness.

For those who don’t know, Midnight Madness is a longstanding tradition in college basketball that was started by Lefty DreisellDriesell at Maryland in the 1970s and has since turned into the single most ludicrous night in sports. Up until 2005, college basketball teams were permitted to officially start practicing at midnight of the Friday night (or technically the Saturday morning) closest to Oct. 15, so it became a tradition for a lot of teams to celebrate the start of a new college basketball season by holding an open practice in their arenas at the exact instant they were allowed to.

Because these practices were open to the public and coaches obviously didn’t want to give away secrets, most teams made them less of an actual practice and more of an exhibition for their fans by having 3-point and dunk contests, and intrasquad scrimmages. And that was pretty much it. It wasn’t anything too crazy; essentially just an hour or two of fans getting a sneak peek at their team, and teams giving back to their fans by putting on a little show for them.

But two important things happened between then and now that have turned Midnight Madness into something of a parody of itself. First of all, college basketball programs realized that Midnight Madness could potentially be a big selling point with recruits, so they placed less of an emphasis on entertaining fans and more on making it a party to grab the recruits’ attention. Coaches apparently thought the best way to do this would be to completely disregard the basketball and instead bring in a bunch of D-list celebrities, rappers, and DJs, go overboard with the pyrotechnics, light shows, and highlight videos, and essentially just turn their arenas into night clubs without alcohol or NBA players getting arrested for assault. In other words, coaches thought the best way to grab recruits’ attention would be to make Midnight Madness a cross between a WWE event and an average party from MTV’s My Super Sweet 16 (in case you think this is a criticism, I should mention that for almost three years WWE events and My Super Sweet 16 had no. 1 and no. 2 priority on my DVR).

The second thing that happened was that in 2005 the NCAA moved up the time that teams could have their first practice from midnight to 7 p.m. ET. With this change, many schools decided to move their Midnight Madness festivities up so they could not only attract larger crowds but, more important, so they could make it home in time to watch Chris Hansen bust a bunch of creepy pedos in the second hour of Dateline.

Suddenly, an event called Midnight Madness was being held on college campuses all over the country well before midnight (I know most schools don’t call it Midnight Madness anymore, but whatever — most fans still do). This might not seem like much, but I assure you it’s a big deal. By not having Midnight Madness at midnight, college basketball teams are basically saying they no longer have any regard for society’s rules.

It’s this kind of indifference that leads to people trying to go through the express checkout line with 23 items in their cart, disregarding the two-slice maximum by taking entire pepperoni pizzas from the Pizza Hut lunch buffet and leaving the rest of us with that mushroom/pineapple/onion combo, and trying to get away with stepping over the line in a bowling-league game that determines who enters the next round-robin. Simply put, by not having Midnight Madness at midnight, we’re now one step closer to an anarchical society in which it’s perfectly fine to knock ice cream cones out of little kids’ hands and set puppies on fire.

College basketball programs figure that since they’re already having Midnight Madness before the sun even sets, there’s no reason why anything else about the event should make any sense, which explains how we got to the point that Syracuse invited Deena from Jersey Shore to its Midnight Madness this year (apparently the school has since rescinded the offer).

To prove my point that Midnight Madness has basically become a completely nonsensical circus (and again, I’m not complaining at all — I absolutely love what it has become), take a look at some of the planned events for Midnight Madnesses all over the country (note: not all of these are taking place tonight) and see if you can figure out which ones are actually going to happen and which ones I made up:

St. John’s: The first 1,500 fans will get a free Nathan’s hot dog, one lucky fan will get the chance to win an iPad, and thousands of unlucky fans will have to listen to DJ Webstar on the ones and twos all night.

Boston College: A male student will be picked from the audience for a half-court shot.  If he makes it, he will win a walk-on roster spot on the team for the entire season, where he will most likely be unappreciated and sodomized on a regular basis.

BYU: One lucky BYU student will win the opportunity to have sexual intercourse one time and consume one alcoholic drink throughout the course of the academic year without facing any punishment whatsoever.

UCLA: The Bruins will split into a Blue team and a Gold team, and the two teams will race one another through the Family Double Dare obstacle course.  Each member of the winning team will receive a Talkboy and five containers of Nickelodeon Gak.

Temple: Bill Cosby will perform standup comedy an hour before the basketball festivities begin. The first 5,000 fans through the gates will get a free Pudding Pop.

Rutgers: One fan will have the opportunity to win a two-year lease on a Volkswagen. Details about this Volkswagen are unknown, which means there’s a solid chance it’s going to be a hot-pink Beetle.

Syracuse: A Russian acrobatic act from America’s Got Talent is going to perform.  Also, there is going to be a “Legends” game featuring some of the best Syracuse basketball players ever, such as Carmelo Anthony, John Wallace, Hakim Warrick, and Gerry McNamara’s chinstrap beard.

Marquette: Coach Buzz Williams and members of the team are planning on doing karaoke. Fans are encouraged to bet on whether Coach Williams will sing “Sweet Caroline,” “Don’t Stop Believin’,” or “Friends In Low Places” because, let’s be honest, there’s no way he’ll sing anything else.

Georgetown: Ten lucky fans will get pulled from the audience and moved to courtside seats, where at some point during the event they will be expected to play the role of the Chinese team during a reenactment of Georgetown’s infamous brawl in China this summer.

Mississippi State: An iPad is going to be given away to one lucky fan.  One unlucky fan, on the other hand, is going to win $500 toward the cost of their books for a semester, which they will no doubt consider to be a complete waste that could’ve been better spent on more important things like kegs and trips to strip clubs.

Auburn: Auburn will have “inflatable games” (presumably a bouncy castle), a face painter, and a balloon artist on hand.  The balloon artist apparently will take special requests, but if you want a Cam Newton it’s going to cost you at least $180,000.

Louisville: One lucky fan will win a pair of season tickets if he or she can complete the Rick Pitino Challenge, which consists of Hula-Hooping for as long as possible.  In order to win, the fan must keep it up for longer than 15 seconds.

Oklahoma State: Legendary OSU coach Eddie Sutton will be shot out of a human cannon into a giant vat of orange Jell-O.

I don’t want to disappoint anyone, but that last one isn’t actually going to happen. And it’s a damn shame, too.