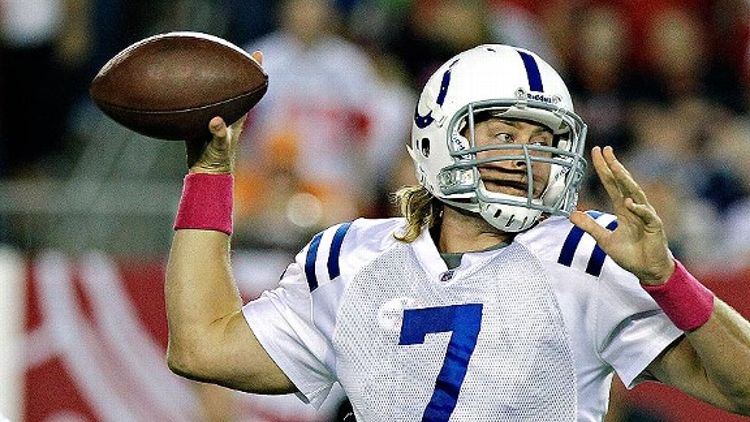 Hey you, yeah you with all the disposable income. You know what stimulates the economy? Casual sports gambling! But we’re not throwing you in the deep end without some floaties, here. The Triangle has contracted two of Vegas’ most astute handicappers to help you navigate the choppy waters of gambling, going into this sixth weekend of the NFL season. Here’s what they had to say.

Cincinnati Bengals vs. Indianapolis Colts — UNDER 41
Two extremely inexperienced quarterbacks will face off with Curtis Painter against Andy Dalton. Both quarterbacks are certainly below average, but also keep in mind, they’ve each played enough games for teams to see the tape and take away what they do well.

New York Jets vs. Miami Dolphins — UNDER 42.5
One positive with the tidal wave of OVERS in the NFL the last 12 months is the inflation of a total with a game featuring Mark Sanchez and Matt Moore at the quarterback position. The Jets hungry defense will shut down Moore and the ‘Fins, while Sanchez is a vacation for the Dolphins defense after facing Tom Brady, Philip Rivers and Matt Schaub.

Atlanta Falcons vs. Carolina Panthers — UNDER 51
Atlanta will try and succeed by running the football in this contest between the tackles against a soft Carolina front seven. This will control the clock, and importantly bleed the time away in this one. Julio Jones will miss this game, which truly hurts the Falcons’ playmaking ability.

From Bryan Leonard:
Now 10-5 on the season as OVERS continue to dominate in Vegas. Lines have been adjusted but have they been adjusted enough?

Jacksonville Jaguars at Pittsburgh Steelers — UNDER 40 1/2
Overall, four of the five Jacksonville games have posted scoring totals of 35 or less, against teams far weaker defensively than the Steelers. Pittsburgh has injury problems offensively, including Big Ben, who would like nothing better than to hand the ball off and throw short passes. The Steelers know they can win this game without risking the health of their QB, which means a grind it out low-scoring affair.

Indianapolis Colts at Cincinnati Bengals — OVER 40 1/2
The Colts have shown more of a downfield presence with Painter behind center. All five of their games have surpassed today’s [Thursday’s] posted total. Colts are 11-2 over the total playing on the road. Bengals have put up 22 points or better in all but one game this season as they haven’t skipped a beat without Carson Palmer. Overall, four of their five games have surpassed this total.

New Orleans Saints at Tampa Bay Buccaneers — UNDER 49 1/2
Overall, nine of the last 10 meetings in this series have finished below this posted number with the lone OVER being a 50-point affair. None of the last five meetings in Tampa Bay exceeded 45 points. Bucs held the opposition to 13 and 17 points the two weeks prior to their defensive meltdown last week at San Francisco. We look for a defensive bounce back from Tampa here.

Filed Under: Gambling, How Not to Lose Your Money, Las Vegas, NFL, Swimming With the Sharps