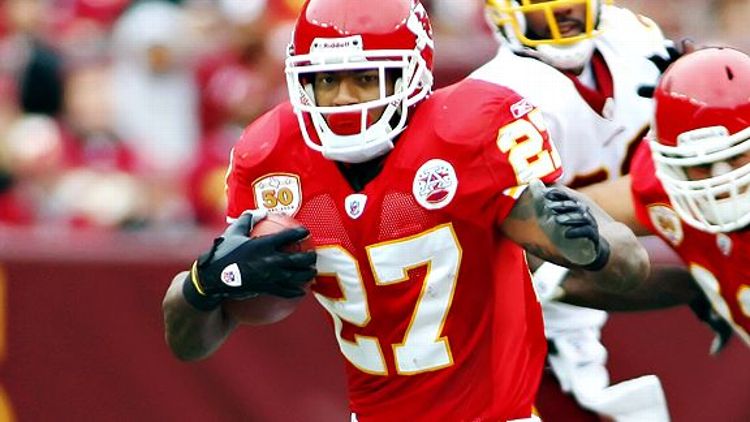 Have you ever played in the NFL? Then why are you reading this blog, son!? If you have two working legs, decent eyesight, put up some solid stats sometime since the first four years of George W. Bush’s presidency and have a lawyer/agent, then you should definitely be on some team’s preseason squad. Ask Larry Johnson!

On Tuesday, amid frantic headlines of an earthquake rocking the East Coast, the Miami Dolphins shook the ground with some news of their own (SMH @ myself), signing veteran running back Larry Johnson.

We haven’t seen Johnson carry a ball in anger since his brief stint with the Washington Redskins in 2010. But Miami is hoping to get just a little sliver of golden age/Kansas City Chiefs Larry Johnson. That Larry Johnson was good. Like “Christian Okoye in Tecmo Super Bowl” good.

Things in Kansas City went bad for Johnson in ’09 when he ripped coach Todd Haley on Twitter, prompting his eventual release and move to the team where dreams go to die — the Cincinnati Bengals.

To his credit, Johnson seems to be humbled by the wrong turns his career has taken. Speaking with media this week, he said: “It’s kind of hard to convince anybody with my colorful background like, ‘Yeah, I’ve changed,’ or ‘Yeah, I can do better,’ … You’ve got to understand where you’re at in your career. All you can do is just be thankful for one little shot, even if it’s going to last a week or a month.”

In making this move, Miami adds a little bit of experience and short-yardage expertise to its running back group. But the Dolphins are also following suit on something of an offseason trend and taking part in the completely made up Fallen Star Rehabilitation Program.

Albert Haynesworth. Plaxico Burress. Shawne Merriman (who re-signed with the Bills after an injury-plagued season). Vince Young. Teams in need will take a low-risk chance on players with impressive-if-shaky resumes, if they think there is any upside at all. Perhaps, given the success the Eagles have had with Michael Vick, front offices are a little slower to turn their backs completely on a player if there’s just slightest possibility that he can make a contribution.

In Johnson’s case, you’d have to guess that that chance is pretty slim. The last time he was on a team (Washington) he was released because he had so little to offer. And running backs, typically, do not get better with age or find some kind of extra gear in their 30s.

Regardless, it’s worth keeping an eye on Johnson, both to see whether he can make a contribution to the Dolphins and — even if he can’t — to see how he settles in. He likely won’t have another chance to do either after this.