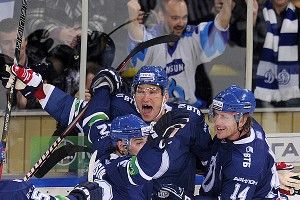 In any other year, the news that Russia’s Kontinental Hockey League reached a deal with ESPN to broadcast some of this season’s games on ESPN3 (the broadcaster’s online streaming channel) would be a relatively ho-hum announcement. And in truth, in years past, it has been a ho-hum announcement. Most people, upon hearing of the arrangement, probably didn’t know this actually isn’t the first time that KHL games will be aired on the ESPN3 feed.

But this isn’t just “some other” year; it’s a lockout year. And so hockey fans, dismayed by the news that talks between the NHL and NHLPA appear to be at a “stalemate,” will grab on to whatever good news they can get. In the first 10 days of October, we’ll be able to watch five KHL games, all of them featuring one or more NHL stars. Hey, it’s a start.

Marquee games to be broadcast include Dynamo Moscow against Lev Praha on October 9, which will see Alexander Ovechkin facing off against the likes of Jakub Voracek, Jiri Hudler, and the newly signed Zdeno Chara. One day prior, a SKA St. Petersburg team that boasts Ilya Kovalchuk, Sergei Bobrovsky, and Vladimir Tarasenko will take on Alexander Radulov, Ilya Bryzgalov, Mikhail Grabovski, and Pavel Datsyuk of CSKA. (Datsyuk has already been hitting highlight reels.) More games will likely be added to the calendar in the future.

Around 100 NHL players have already signed contracts with teams around Europe; many others will suit up for minor league teams in North America. Coverage of these games will ultimately be spotty and random, but compared with the last lockout there’s much greater potential this time around for these sorts of distribution deals to get done, and for fans to be able to watch at least some of their favorite players, wherever they may be. It’s not optimal, but it’s better than nothing.

And who knows: If this lockout lasts much longer, we’re going to have to start putting some serious thought into supporting a good old-fashioned rebel league. Once we do, we’ll need someone to televise it, so any current inroads, however bumpy, can’t hurt. Maybe if we’re lucky ESPN3 can introduce hockey to its elusive cousin The Ocho. I feel like they’d all get along.