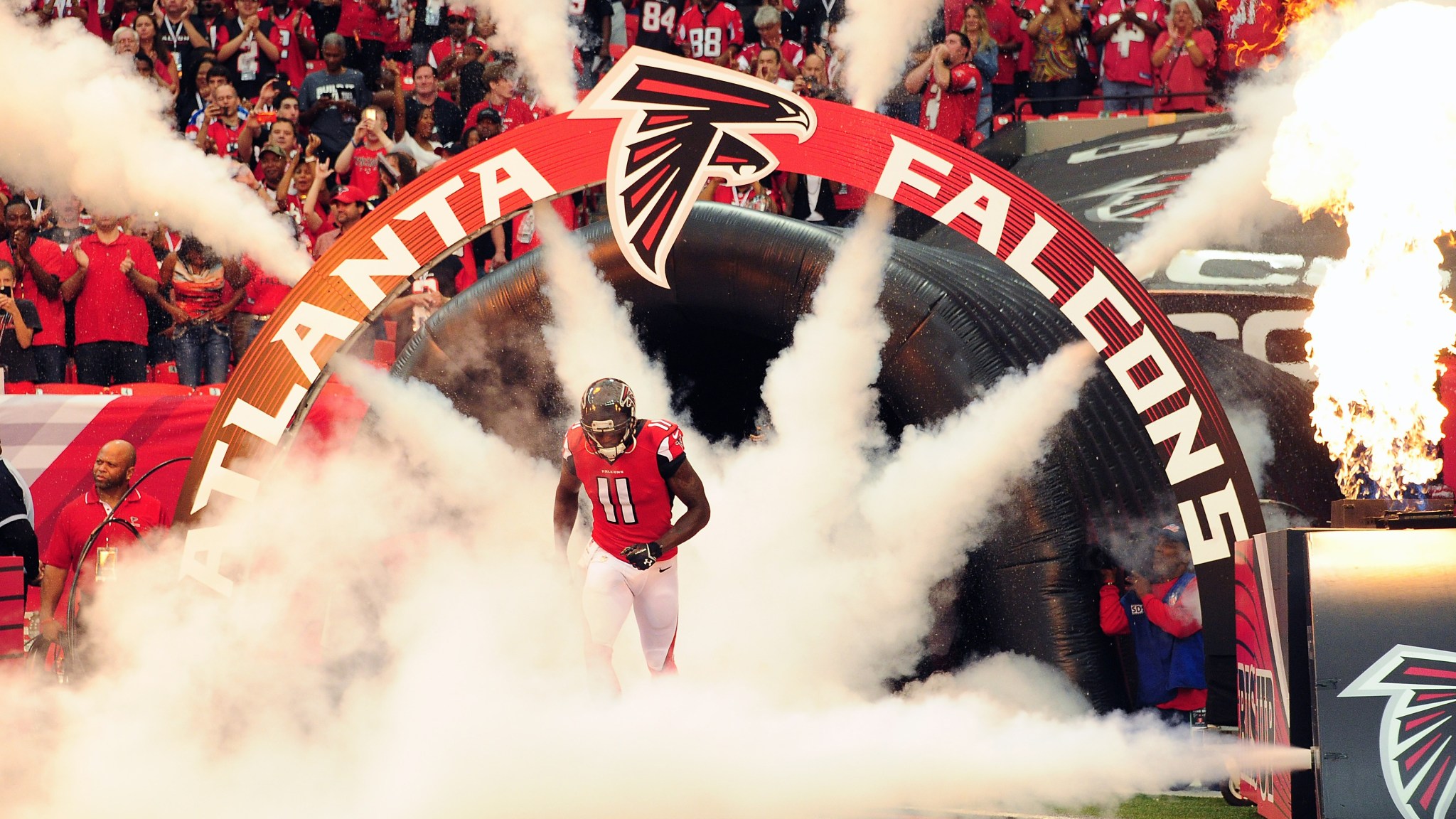 Thomas Dimitroff doesn’t look like he runs an NFL team. In a profession where Ted Thompson and his Packers-sponsored golf outfit are the standard, the Falcons’ general manager looks like few of his colleagues. Rams GM Les Snead has style, but it’s that of Ned Stark’s body double. Dimitroff, with his spiked hair, thick frames, and wispy goatee, would fit on HBO, too. It would just be as someone throwing money around on Silicon Valley. He’s a vegetarian in a land of carnivores, a Canadian in America’s game, a Deadhead surrounded by Seger fans. It’s no surprise, then, that Dimitroff works the same way he looks: like no one else.

The longest stint of Dimitroff’s career before coming to Atlanta was with the Patriots, alongside Bill Belichick. For four years, Dimitroff worked as the director of college scouting for a franchise notorious for hoarding draft picks and trading down every chance it got. When Dimitroff was given the keys to the Falcons in 2008, he started his tenure by looking at every draft choice the Patriots made — and going in the exact opposite direction.

With Michael Vick likely gone, Dimitroff didn’t have much to consider when Matt Ryan — supposedly the safest quarterback bet in years — was still sitting there when Atlanta came on the clock at no. 3. Where Dimitroff’s strategy started to emerge was 18 picks later, when he traded two second-round picks for Washington’s pick at 21 to take left tackle Sam Baker. Neither of the picks traded away originally belonged to Atlanta. One was acquired in Houston’s trade for Matt Schaub a year earlier; the other came in a deal for DeAngelo Hall about two months before the draft. The process to select Baker was the first glimpse into how Dimitroff would treat draft picks — not as a collection of lottery tickets, but as a handful of chips that could be cashed in for potential cornerstones he might covet. Six years later, as Atlanta looks to rebound from the disaster that was 2013, that approach is still what defines the Falcons’ roster.

In the NBA, seeing a bunch of smaller assets as a means of landing a star is the norm. A limited number of players are potential championship centerpieces; bringing in one of those players is a GM’s objective until he does. Simple math makes that plan less effective in football. With 53 players and 22 starters, the impact of one player (unless that player is a quarterback) is dulled.

No one would argue that the Falcons didn’t make it work, though. In the first five seasons after Dimitroff arrived, they never won fewer than nine games. Twice, they won 13. Two years ago, they were a Harry Douglas slip away from the Super Bowl. If that happens, maybe we’re celebrating Dimitroff’s all-in approach instead of championing Niners GM Trent Baalke — the new king of draft-pick stockpiling — as the smartest guy in the room. We’d point to Atlanta handing over a second-round pick for Tony Gonzalez as genius. We’d laugh as Julio Jones tore up the NFC playoffs while the picks Cleveland got in exchange for him (Phil Taylor, Brandon Weeden, Greg Little, Owen Marecic) toiled away. But Douglas did slip. And if 2012 was everything that could go right with Dimitroff’s plan, 2013 was everything that could go wrong.

When a team trades a handful of picks to move up, the main quality it sacrifices is depth. When a team does it routinely, a rash of injuries turns from problematic to season-killing. Jones started last season the same way he’d ended the previous one — as one of the four best wide receivers in the league. In his first five games, he had 41 catches for 580 yards and a couple of touchdowns. The problem is that those were his only five games, as foot surgery ended his season a week into October. Knee and hamstring problems turned his counterpart Roddy White into a broken-down version of himself for most of the year. Sean Weatherspoon, probably the Falcons’ best defensive player, missed nine games. Baker sat out of 12. Newly signed Steven Jackson managed only 157 carries.

No matter the injuries elsewhere, the biggest blow — for several reasons — was Jones. The depth a team concedes when trading up for a star is even more important when that star gets hurt. Not only were the Falcons without Jones, they were without the two or three starters they might have had if they never traded for him at all. Jones’s absence made the holes elsewhere even more glaring. The lack of pass rush (last in adjusted sack rate according to Football Outsiders), which was void of a single above-average homegrown player, haunted the defense. A subpar offensive line and a hobbled running back meant heaping even more on Ryan, who regressed without his top-tier receiving talent. The offense just folded in on itself.

Most of Dimitroff’s headline-grabbing moves have been with Ryan in mind. Baker was brought in to protect a young franchise quarterback. Gonzalez was a sought after security blanket to aid that quarterback’s development. Jones was the final piece to put him over the top. For the most part, it worked. After the 2012 season, Ryan was given the contract extension he seemed to deserve as a 27-year-old who ranked among the best quarterbacks in football.

What we saw last season is what happens when that support system starts to crumble. Ryan’s raw numbers look close to what they have in the better seasons of his career, but it took him 651 throws to get his 4,515 yards. He finished 20th in yards per attempt, right behind Case Keenum. Ryan still belongs near the top of the quarterback tier that doesn’t include Manning, Brees, and Rodgers — the sort that needs elite talent around him to make an offense hum. The hope for this year’s Falcons is that he’ll have that talent, with Jones on track for Week 1 and White riding a strong end of the season into this new one.

What’s certain is that they’ll need them both. The realities brought on by the Jones trade haven’t gone away. 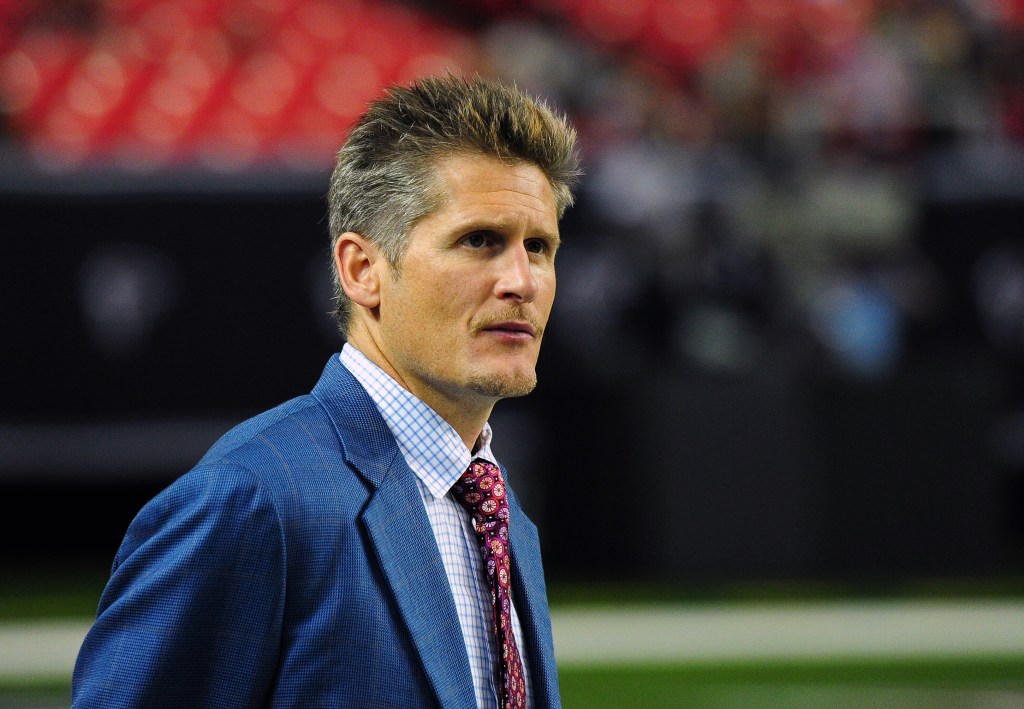 Dimitroff has always been someone who attacks his team’s weaknesses every offseason, but this year, there was only so much he could do. The Falcons needed a makeover on the interior of their defensive line to finally make the full transition to a 3-4, and they did that by signing Paul Soliai and Tyson Jackson. They also remade the right side of their offensive line, signing Jon Asamoah to play guard and taking Jake Matthews sixth overall to be this year’s right tackle and eventually the left tackle when Baker plays out his string.

The area where Atlanta probably needed the most help is an area where it didn’t get much, but that’s no fault of Dimitroff’s. This year’s top 10 was void of edge rushers outside Jadeveon Clowney. The irony of the “Clowney to the Falcons” rumors leading up to the draft is that the reason people thought the move might happen is the exact reason it couldn’t — or at least shouldn’t — have.

Atlanta’s overall lack of depth because of past trades (there was actually another in 2013, when Dimitroff gave up a third-round pick to move up for Desmond Trufant) meant it couldn’t afford giving up a chance at potential starters. It was the same at the beginning of the second round, when the Falcons ended up taking Minnesota defensive tackle Ra’Shede Hageman after teams like the Eagles and Cowboys traded up for pass-rushers in the 10 picks before Atlanta’s.

That leaves the Falcons’ pass rush in a spot similarly troubling to the one it was in last year. The comparisons don’t end there, either. They’ll again face life without Weatherspoon, who’s out for the season with a torn Achilles tendon. With Gonzalez retired, Ryan will start the season without one of his familiar targets. There’s reason to believe the talent across the board for Atlanta will be better. Rookie cornerbacks from a year ago should be more comfortable in Year 2, Asamoah and Matthews are a significant upgrade, and the defensive line is now filled with high-priced players.

For the most part, though, it’s a roster with plenty of weak spots: outside linebacker, inside linebacker, tight end, free safety. That’s why this offseason’s efforts won’t matter much if Jones isn’t the player he was at the end of 2012 and the beginning of last season — the type of player who helps make Ryan the quarterback Atlanta needs him to be. When the Falcons traded up for Jones three years ago, they made it clear they thought he was the type of player upon which a franchise could hinge. It turns out they were right.

The Miami Heat and the Prisoner's Dilemma