The Miami Heat and the Prisoner’s Dilemma 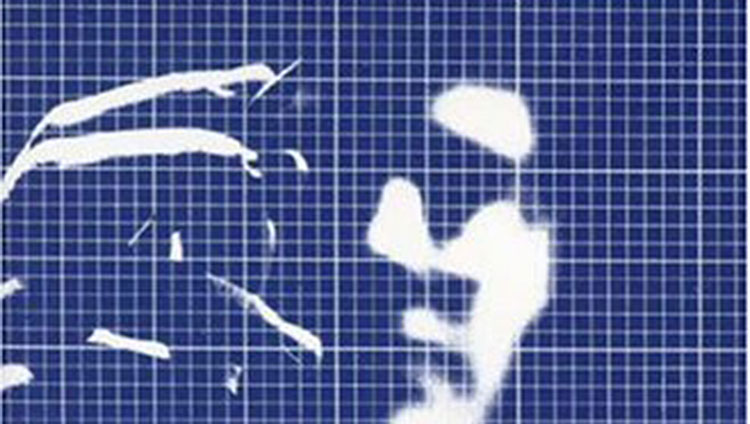 “We hope, however, to obtain a real understanding of the problem of exchange by studying it from an altogether different angle; this is, from the perspective of a ‘game strategy.’” —John von Neumann and Oskar Morgenstern, from their Theory of Games and Economic Behavior

Game theory is a field of study, flowing from the work of Hungarian American polymath John von Neumann and economist Oskar Morgenstern, that seeks to quantify the way people make decisions by viewing the how’s and why’s of decision-making through the lens of games.

You make decisions every minute of every day, and some are so reflexive that you barely register them as anything more than naturally relenting to a biological urge. I’m hungry. What should I have for lunch? But, as other factors intrude into your I’m-lazy-so-I’ll-just-order-pizza flowchart (ordering with coworkers who like strange toppings, weird food allergies, restaurant delivery times, traffic on the delivery route), things quickly become more complicated.

Chance, other actors with goals that affect but are independent from yours, and incomplete information are all factors involved in the kind of multilayered decision-making you might use to, say, haggle with a car salesman. Game theory allows us to focus in on life’s baffling pandemonium with a more focused and rigorously precise lens. Or so they say. I am very new at this.

Since the publication of Neumann and Morgenstern’s Theory of Games and Economic Behavior in 1944, game theory has influenced the way companies manage their employees; the way governments approach foreign policy; even how gamblers gamble. Von Neumann was instrumental in the development of the U.S.’s “mutually assured destruction” policy of nuclear weapon development and proliferation, and game theory principles were used extensively during the Cold War, perhaps most dramatically during the Cuban Missile Crisis, when the world stood at the brink.

But forget nukes. The most important application of game theory, by far, in terms of our modern, interconnected world, lies in answering the incredibly critical question of whether LeBron James, Chris Bosh, and Dwyane Wade will re-sign with the Miami Heat or play somewhere else. This question, one that has plagued the human race for nearly three increasingly interminable weeks, is all that matters.

Probably the most well-known game theory variant, and the most germane to our LeBron-Bosh-Wade problem, is the prisoner’s dilemma. The prisoner’s dilemma imagines a situation in which two partners in crime are interrogated separately by the authorities about their illegal activities. The criminals have two choices: snitch or keep their mouths shut. If both prisoners remain Only Built 4 Cuban Linx, they each end up serving one year. If only one confesses, the person who keeps quiet gets five years, while the snitch feels the sweet wind of freedom caressing his/her cheek . If both prisoners confess, they both do three years.

Complicating matters, the prisoners can’t communicate with each other, so they have no idea what the other person plans to do. This changes their calculus, because if they can’t coordinate, they can’t know if the other plans to rat them out. Therefore, assuming both prisoners are rational, the best decision for each is always to confess, as the worst possible outcome is the less punitive three-year sentence. The best that could happen is going free. 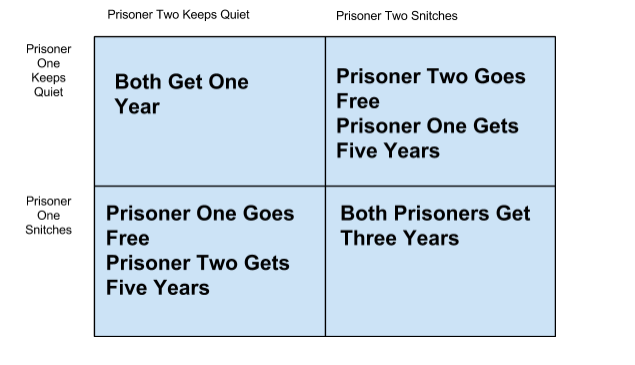 How can we apply the prisoner’s dilemma to the LeBron-Bosh-Wade free-agency problem? Good question. First, a word about game theory. It’s really, really complicated and extremely specialized. Von Neumann was basically one of the 20th century’s singular fucking geniuses. I majored in music and didn’t even graduate. But! I did read Game Theory: A Nontechnical Introduction by Morton Davis, and I think I even understood some of it. So, here we go. 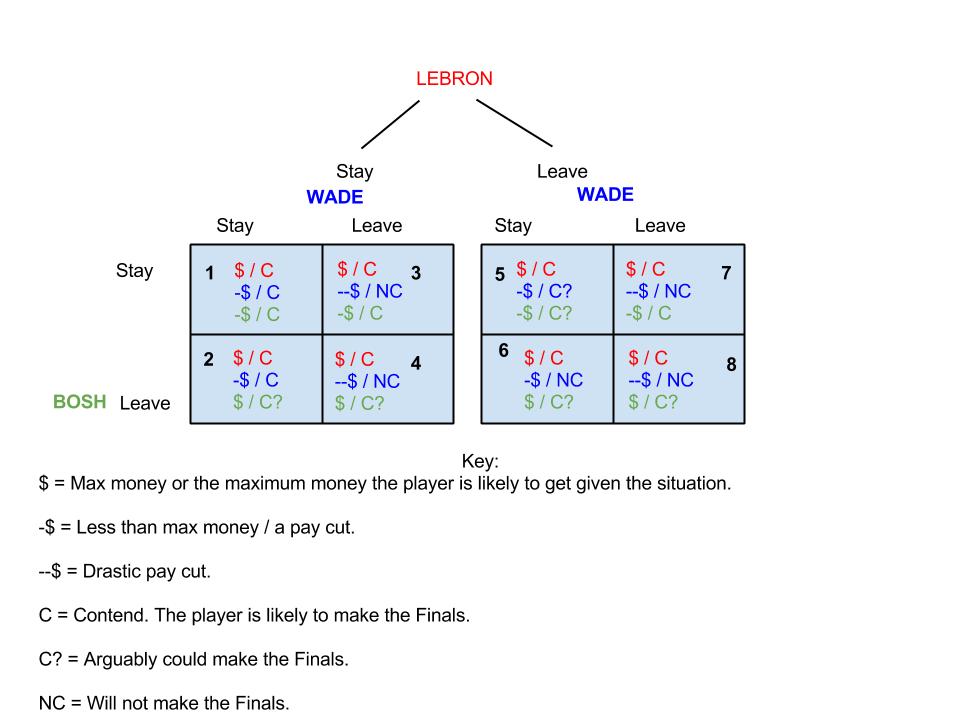 OK, let’s unpack this. Unlike a canonical prisoner’s dilemma, we can assume that LeBron, Wade, and Bosh can communicate with each other, but let’s pretend they won’t. Why? Because I worked semi-hard on these charts.

For the sake of sanity, I’ve distilled each player’s choices down to either leaving or returning, and simplified the salary/contending outcomes.

“Stay” means returning to Miami, while “leave” means leaving for any of the particular player’s likely suitors.

I’ve broken down a few scenarios below. Additionally, I think we can immediately discount certain boxes that are implausible on their face. Any permutation in which Wade leaves, for example, seems unlikely. Like, who’s paying him? For instance, Box 8 — I doubt, no matter how much those of us who love chaos might want it to happen, that James, Bosh, and Wade leave Miami. Or Boxes 5 and 7, in which LeBron leaves, Bosh stays, and Wade either stays or leaves; certainly if LeBron leaves, Bosh will go to the Western Conference for the cash.

The most boooooring and, in my opinion, the most likely outcome. If LeBron returns, assuming he sticks to his max demand, he’ll get paid, while Bosh and Wade will certainly take cuts. That said, Wade is taking a cut no matter what happens, while Bosh’s salary reduction is arguably (I love playing with other people’s money) offset by a surer path to the title. LeBron, as the best and most versatile player in the league, is likely to contend no matter where he goes, but, and this is dependent upon whether he likes Dwyane and Chris, which I assume he does, there’s a certain elegance (and low sports media/blog-twittersphere #hottake probability) in keeping the band together.

The second most plausible outcome.

LeBron, as noted above, will make his money and contend regardless.

Bosh would get the max from Houston, where you could reasonably imagine he makes the Finals, though it’s not as sure a bet as playing in the East.

Pretty unlikely. I can see James and Bosh staying, but where is Wade going? Wade isn’t, like, going to take the mini-MLE or something from a contender, and anyone who would sign him for a two-year salary vaguely resembling the deal he opted out of wouldn’t be in contention.

Nah. If Bosh leaves for Houston’s max and LeBron stays, certainly Wade will take a haircut to contend in the East.

This would be simply awesome. It’s the best outcome for people who just want to watch the world burn. LeBron leaves for someone’s max and contends for titles, Bosh goes to Houston, Wade sticks around to play with Shabazz, McBob, and what’s left of Danny Granger, and we get a preeeeetty meaty three-way rivalry/narrative tornado. God, I hope this happens.

Box 1 makes the most sense for Bosh and Wade. LeBron will win games no matter the uniform he wears. Teams will clear the required cash if they think they can turn James’s head. But, all things regarding LeBron’s max being roughly equal, returning to Miami with Wade and Bosh affords a good path back to the Finals in Eastern Conference wasteland and shields him from any untoward (or further) ring-chaser criticisms. We’re getting the band back together.