Jimmy Butler, Amir Johnson, and Bradley Beal on the Little Big Things They Do on the Court 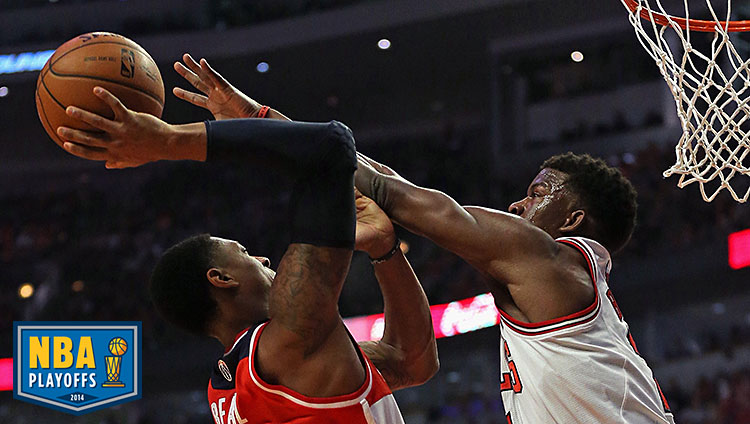 Over the next few weeks, much attention will be lavished on the players who score, pass, or rebound their way to stardom. But we also like to shine some light on the guys who do the little things. How does Bradley Beal navigate a maze of screens to shake loose of his defender and get off a shot? What does Jimmy Butler do to ensure his man never gets an open look from the perimeter? Does Amir Johnson set screens differently to free Kyle Lowry than he does Greivis Vasquez? We went straight to the sources to find out.

Bradley Beal on Moving Without the Ball

I’m really not even paying attention to my defender. I know that my bigs are going to do a great job of hitting him, so I’m only really worried about my big’s defender. Is he closing out on me? If so, then I can dump it off to [my big], or [if not] I have a shot. I just read that defender and where the help side is.

It’s just instinct. On top of that, we practice and work hard all the time. Especially me and Marc (Marcin Gortat). I think me and Gortat are always on the same page. If a team does certain reads, we have a counter for it, every time. 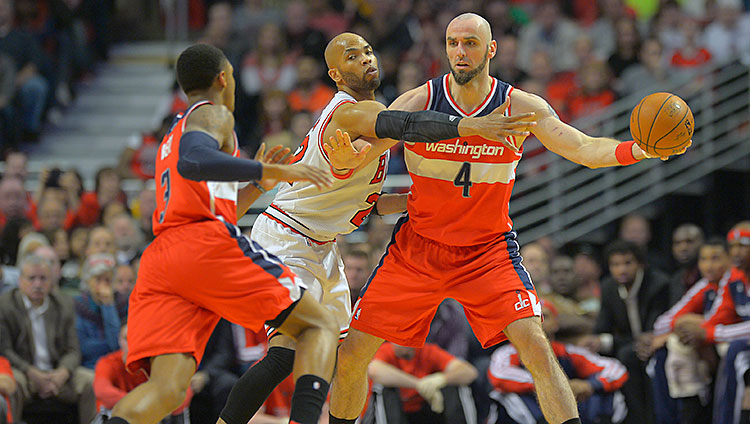 How did you learn to navigate in such tight spaces?

Just confidence and instincts, basically. It’s just making reads and just knowing how guys are defending you, how they’re playing you, and just being smart and doing whatever it takes to get that spot.

One of the things I’ve noticed is that when you come down the court in transition, a lot of times you’re just sprinting right to the corner. John [Wall] is really good at finding you there. Is that something you guys talk about or has it just come naturally to you?

That’s how our offense is, man. We’re a fast-break team. Especially when you’ve got a point guard like John, you have to run. Whenever we have him out there, coach Witt (Randy Wittman) just tells the wings to sprint to the corners. We do that, and that’s where the majority of our 3s come from.

Jimmy Butler on Closing Out on Shooters

Do you guys practice closeouts?

You line up and you just close out four times on the court. Then you come back and do the same thing.

How are you able to balance closing out hard on a shooter and being able to not go flying past them, so you don’t get beat off the dribble?

Just stop three-fourths of the way out. Booz is the best at it. So it’s easy whenever you’re watching Booz do it [in practice].

You’re particularly good at starting off on the perimeter, then bumping down into the lane to hit a guy on the roll and then getting all the way back out. How are you able to do that so well?

Just reps. Reps, reps, reps. I feel like a lot of teams are going to roll a big, and then send a guard up [to the top of the key]. It’s just about timing. You bump high, and then get back out to your man on the perimeter.

What’s your strategy when you’re trying to get a hand in your man’s face? Do you use your right hand, left hand? How far out do you extend?

Whatever hand is closest. Do whatever it takes to make the man miss the shot.

Depending on who the point guard is on the other team, or whoever has the ball, will you not stray as far from your guy? How does that work?

It just depends on how the person I’m guarding is shooting the ball. If he’s a shooter, if he’s a driver. It all comes back to the scouting report.

Do you close out differently on corner shooters than wing shooters?

Oh, yeah. You don’t ever want to give anybody a corner 3. That’s the closest 3. That’s an easy shot for a lot of people in this league. 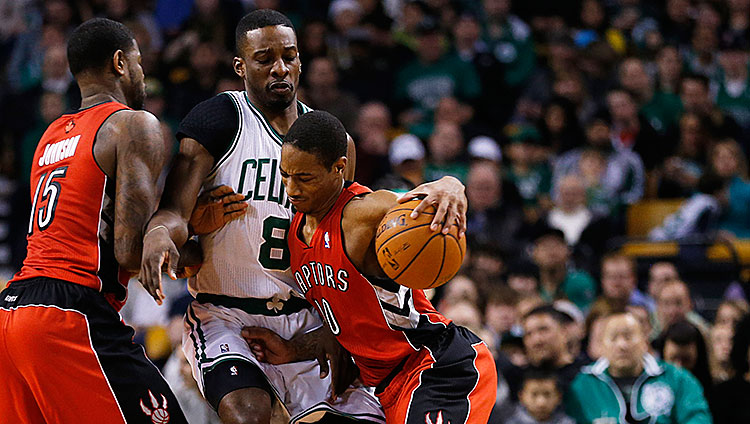 You’re a guy who sets very good screens. With two very different styles of ball handler on the team in Kyle [Lowry] and Greivis [Vasquez], do you have a different way that you set your screens depending on which one of them is handling the ball?

Just knowing what Kyle likes to do, I probably hold the screen a little bit more. He crosses over in front of me, so that way when he goes in front of me, I can roll to the other side. Greivis, I get to just set it and roll because he likes to drive all the way to his right hand.

Over the last couple of years, you’ve been more diversified, rolling straight to the rim, which you used to do almost all the time, and now you’ve started popping out a little bit more. How have you worked on that, and how does it help having a guy like Kyle who’s such a threat to score coming around your screen?

It’s all reads on the court. It depends on how the defense is playing. If they trap, I have to make the short roll, so I have to stay in the pocket where you can see me to make the pass. (Note: Amir’s “short roll” was detailed by Zach Lowe in his NBA Mega-List of Things to Like and Dislike on Thursday. Scroll down to no. 13.) If the defense gets dragged out, stays longer on Kyle, I get the pop. And if the defense sags back, that’s when I roll. It’s all a read.

When you’re making that decision, are you reading your man, his man, or a combination of both?

How does that change, if at all, when it’s Greivis coming around the screen? Or if it’s Terrence [Ross] or DeMar [DeRozan]?

Oh, it’s the same way. It all depends on how they’re guarding it. But I know Greivis is strong going right. That way I can set the pick and get out quicker, and my man either has to guard two people, or the weak side has to help in, then you get it kicked out for the 3 for T-Ross and all our shooters.

On the other side of the court, when you’re defending a screen-and-roll, are there any ball handlers you think are particularly difficult to come out and hedge against and still be able to get back to your man?

Obviously you have a bunch of different guys on your team that could be defending the ball handler in screen-and-rolls. Do you change what you’re going to do based on who the other defender in the action with you is, or is it more just about the ball handler and the screener?

I don’t change anything [based on my teammates]. It’s all ball handler and screener.

NHL Grab Bag: Everything Is Terrible and Everyone Is the Worst

He Does the Recruiting: Cam’ron, Harlem, and High School Basketball Lies