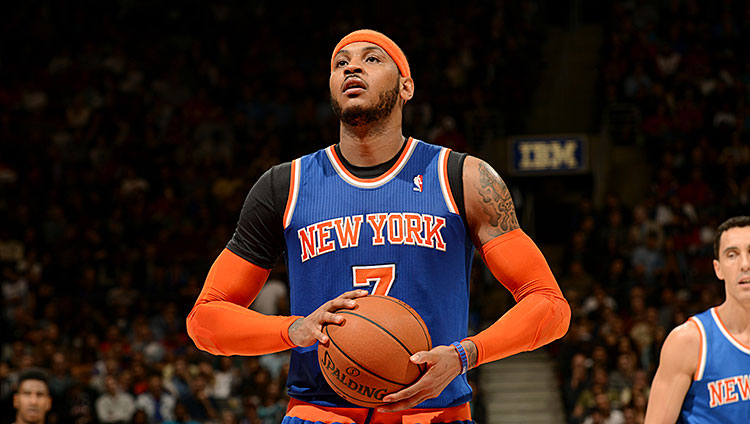 The Knicks did something very, very strange a couple of weeks ago. For the first time since 2008, they made a trade in which they acquired — and subsequently used — at least one draft pick. Over the last 10 years, they have traded for a draft pick only five times. In that same time span, they have made nine trades in which they surrendered a total of 18 picks.

As Zach Lowe detailed, the trade adds some money to the Knicks’ books in the summer of 2015, but it also gives them a badly needed upgrade at point guard, a solid stopgap center to replace Chandler, a sharpshooting wing, and, most important, an injection of youth and upside.

Larkin was a first-round pick just last year, and he still has potential. He broke his ankle the day before the Mavs were set to leave for summer league last season, derailing his rookie campaign a bit. But he’s only 21, and he’s lightning fast, and he showed the ability to both get to the rim and get his shot off the dribble when he was at Miami. He was also First Team All-ACC Defense, but after the Toney Douglas Experience™, Knicks fans know better than to trust that designation.

Calderon will likely be entrenched as the starter under new coach Derek Fisher, and Pablo Prigioni will certainly get backup minutes, but if the Knicks can develop Larkin into a quality rotation player, they’ll be better for it.

But back to those picks. When New York selected Wichita State’s Cleanthony Early at no. 34, Knicks Twitter just about lost its shit. You’ve got to understand: Knicks fans are used to reflexively booing whomever the organization takes in the draft. So when the Knicks took the guy Bill Simmons, Jalen Rose, and Jay Bilas were fawning over all night, the same guy who dropped a cool 31 on the Fighting Caliparis in one of the best games of this year’s NCAA tournament, we were understandably psyched.

Early seems pretty well suited to play in the triangle offense. He has a solid post game, particularly against smaller defenders, and he can shoot it from deep (37.3 percent from 3 last season), both traits of traditional triangle wings. Kevin Pelton’s pre-draft projections at ESPN (Insider) pegged Early as the 26th-best player in the class, so getting him at 34 is also good value. Early has looked excellent early on in summer league, shooting well from deep and skying high for acrobatic dunks. He’s played most of his minutes with Larkin and Tim Hardaway Jr. by his side, and the three seem to have already developed a nice chemistry on and off the court.

As if snagging what has been widely praised as a bit of a steal with the first of the two Dallas picks wasn’t enough, Phil Jackson then went and snatched up Internet favorite Thanasis Antetokounmpo, a.k.a. Baby Greek Freak (yes, I know he is actually older than Giannis), at no. 51. I don’t want to speak for Chris Ryan and Andrew Sharp, but this dude is a pretty solid bet to join his brother on the Triangle All-Stars next year. Marc Berman reported that Thanasis may play in Greece next season, but if he stays in the States, he could be a solid defense-and-energy guy (with the potential to develop into more than that) for a Knicks team pretty sorely lacking in the “anyone who can play any semblance of defense” department.

Even all those good vibes coming from a trade that finally gave the Knicks some cost-controlled assets with upside are nothing compared with the fact that Carmelo Anthony will stick around for the foreseeable future. After all the hemming and hawing, all the debating of whether the Knicks should even re-sign the best player they’ve had since the best player they’ve had, he’s back.

So in about four months on the job, Jackson has kicked Mike Woodson to the curb so he is no longer sitting here; hired a coach with whom he shares a deep personal, spiritual, and basketball-philosophical connection; and convinced the best player on the team to stick around and basically just kind of trust that Phil and Fish (portmanteau nickname suggestion: Phish) will be able to figure out how to get the team back into contention.

"Steve Mills and I have assured Carmelo through our conversations, that we share the vision and the determination to build this team."

Andrea Bargnani, Amar’e Stoudemire, and J.R. Smith are still floating around the roster, remnants of a past era obsessed with starry names (and CAA clients), and their contracts are largely the reason “whatever Phil’s building” will likely have to wait until at least next summer. But Melo deciding to wait at least a year — when he’s already 30 and likely to start declining within the next couple of seasons — for true contention because he has faith in the front office’s ability to build a contender around him is a fairly huge development.

Melo coming back is a long-term play. In addition to getting paid, he’s placing his faith in a vision. It’s going to be hard to build a winner — a big winner, the kind Knicks fans haven’t seen since the 1970s — in New York. It was going to be hard whether Melo came back or not.

They have their star forward and a plethora of young wings locked up, and they have Jackson making the calls, which means something to players.

Next summer, the Knicks will be armed with their own first-round pick and, depending on the specifics of Melo’s deal, around $20 million to $25 million in cap space. They’ll be free to recruit guys like Kevin Love, Marc Gasol, Goran Dragic, DeAndre Jordan, and Rajon Rondo next summer and beyond. They’ll be able to make lopsided trades or extort contract-dumpers for even more draft picks or do whatever else it is teams with cap space can do; I forget.

They’ll have flexibility to move in any number of directions for the first time in a good long while. It has been a preposterously long time since you’ve been able to say that many positive things in a row about the Knicks’ roster construction. That’s a pleasant development, in and of itself.

When you’ve been riding the Knicks Fan Roller Coaster for as long as I have (27 years and counting!), you’re trained to keep your guard up a bit. Our hands are used for either covering our eyes or shoving into our pockets while simultaneously shrugging and shaking our heads. For the first time in a while, my guard is down. Maybe I’m kidding myself. Maybe I’ll get burned again. All I know is, I don’t know what to do with my hands.