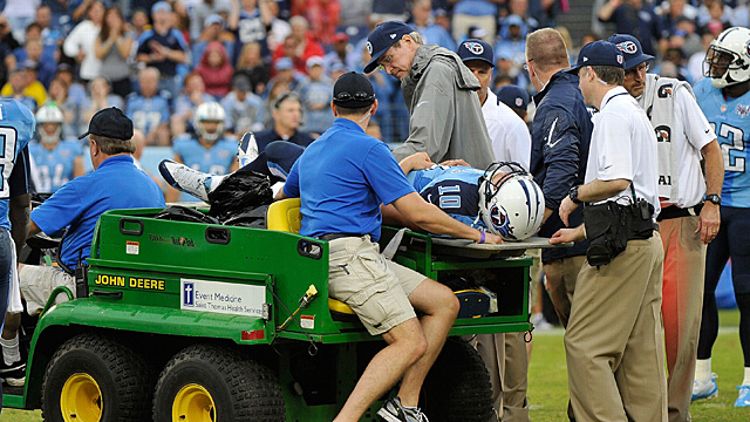 Injury: Right hip
Prognosis: 4-6 weeks
Impact: Anyone who saw that Locker injury live is likely to lean toward the most pessimistic end of those four to six weeks. When Locker eventually hit the ground after taking that helmet in the chest from Muhammad Wilkerson, he stayed there, completely still, clearly doing his best to not move any part of his body. He knew it was bad.

“Right hip” is the best way to describe this because we still don’t know exactly what’s wrong. The swelling around the hip was so bad that initial tests were inconclusive. Locker will have another MRI today to determine what exactly is wrong, but no matter what the conclusion, we know he’s going to miss a significant chunk of time.

The timing here couldn’t be more cruel. Locker was 18-of-24 for 149 yards and three touchdowns when he went down. It was probably the best start of his career. As Bill Barnwell wrote on Grantland last week, Locker still has a long way to go as a reliable quarterback, but it does seem like there’s been some signs of improvement. One thing Locker has been this year is good enough to win. The Titans are 3-1, with their one loss coming on a last-second play on the road at Houston. Tennessee’s defense is much better than it was a year ago, and so far, the Titans have asked Locker to be steady enough to keep them in games as they try to pound away with Chris Johnson and their high-priced offensive line (a strategy that’s come with mixed returns so far).

That task now falls to Ryan Fitzpatrick. Fitzpatrick’s NFL legacy will always be marred by that $59 million contract from the Bills, but here, none of that matters. Among the ranks of back-up quarterbacks, Fitzpatrick may be among the most desirable in the league. He’s proved to be competent if unspectacular not only for stretches, but for multiple seasons. In looking for a fill-in quarterback who could possibly keep a running-and-defense team afloat for a month or two, Fitzpatrick may be ideal.

Chris Johnson’s 15 carries Sunday were his lowest total of the season, which makes sense, considering the Jets have the best run defense in football. Unfortunately for the Titans, it doesn’t get any easier. Tennessee’s next three games: Kansas City, at Seattle, San Francisco. The only consolation to the Locker injury is that those three games (and ideally, three quarters of the games he’ll miss) would have been losses even if he was playing. Overall, though, that’s still not very comforting. Tennessee may not have been headed for the playoffs, but they were clearly a much better team than most of us thought heading into the year. Even at 3-1, the postseason seems like a lofty goal now.

Injury: Torn achilles
Prognosis: Placed on IR
Impact: Barnwell mentioned the schematic/personnel impact of Wilfork’s injury in his Monday column, but a quick refresher: As a 4-3 team, the Patriots have very little depth behind Wilfork at defensive tackle. It’s really just Joe Vellano and Chris Jones. As a result, it wouldn’t be a surprise to see the Pats in more of the three-man fronts they’ve used in the past. No matter what the solution, the reality is that losing Wilfork is losing the most important piece of what the Patriots do on defense from a game-planning perspective. With him in the middle, the Pats are free to play around with the their fronts elsewhere.

There are two other areas where Wilfork’s impact is worth mentioning. The first is statistical. After Wilfork’s dominant showing against the Texans last season on Monday night, the folks at ESPN Stats & Information put together a quick look at the difference in the Patriots defense with Wilfork on and off the field. As of that game, the Patriots had given up an average of 3.6 yards per play with him in the game, compared to 5.25 with him on the sideline. They also went about 90 more drop-backs per sack without their superstar nose tackle in the game. Even if Wilfork has never piled up sacks, he’s occupying enough blockers and enough space to create opportunities for others. And according to Football Outsiders, the Pats stopped teams on third and fourth down with two or fewer yards to go 50 percent of the time — the second-highest percentage in the league.

The second is in Wilfork’s overall presence. The importance of veteran leaders in the locker room can occasionally be overstated, but when it comes to the Patriots and defense, Wilfork has been a steady voice on that side of the ball for most of the past decade. He’s missed just six games in his 10-year NFL career. It also doesn’t help that this year, the Patriots are relying on their defense more than they’ve been since maybe before Wilfork arrived. The Pats are giving up just 14.2 points a game, sixth best in the league. Losing Wilfork is about as a big a blow as a team can suffer on defense.

• Rams safety T.J. McDonald broke his leg against San Francisco on Thursday night, and it looks like he may be given St. Louis’s “IR with designation to return” slot for the season. The rookie third-round pick from USC had been a starter from the beginning of the season for the Rams and had been solid if uneven in his first few games as a pro. Matt Giordano and Darian Stewart should get the chance to compete for McDonald’s spot, but the injury leaves the Rams even thinner at a position that was a question heading into the season.

• Bills running back C.J. Spiller didn’t participate in a walk-through yesterday after injuring his ankle in Sunday’s win over the Ravens. The significance here is that Buffalo plays this Thursday night against Cleveland. Fred Jackson was also hurt Sunday, but it doesn’t look like his sprained MCL will keep him out against the Browns. This is just the latest problem that seems to be hobbling Spiller this year, even as Buffalo has kept Jackson carrying a significant portion of the load.

• Chargers outside linebacker Dwight Freeney suffered a torn quad against the Cowboys on Sunday, and it’s unclear how long he’ll be out. Speaking about the injury yesterday, Mike McCoy said he wasn’t ruling out using the “IR with designation to return” spot for Freeney. It’s a significant loss for San Diego, which wasn’t even planning on using Freeney in a full-time role until Melvin Ingram was lost for the season to a torn ACL in May. The 33-year-old has been very useful as a pass-rusher for the Chargers, who are now going to have to rely on former first-round bust Larry English and rookie sixth-round pick Tourek Williams with Freeney out.