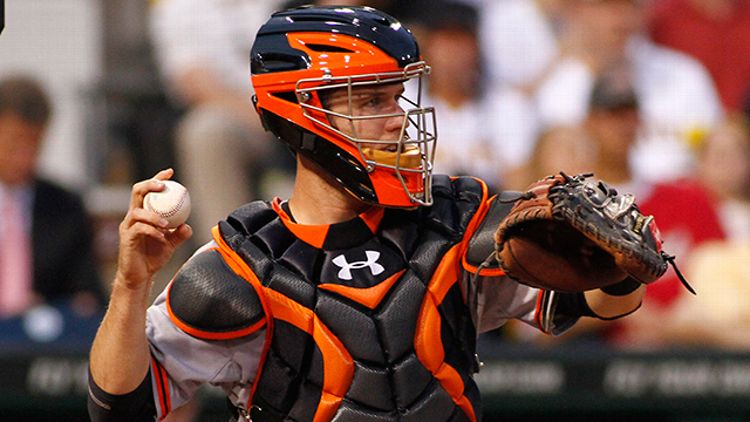 On Tuesday we handed out the American League midseason awards. Time for a look at the NL.

You can name any one of seven or eight candidates and have a great argument, but Posey gets the slightest of nods. For starters, no National League player has put up better park-adjusted rate stats. That’s doubly impressive given Posey is a catcher, the position at which offense is rarest. Posey hasn’t quite played all of his games at catcher. But 75 out of 90, with the numbers he’s put up at AT&T Park, still plays well. And no, we don’t care one whit about the Giants being eight games under .500, compared to, say, some of the top players on winning teams like the Cardinals. Posey, like Yadier Molina and every other player in the league, has no control over the teammates his general manager picks to play with him.

Still, you can make a great case for Molina. Though he hasn’t put up the same power numbers as Posey, the Cardinals backstop is hitting a strong .341/.386/.489 (in 17 fewer plate appearances than Posey). But he is also arguably the best defensive catcher in the game, a skill that can’t be fully captured by Ultimate Zone Rating, Defensive Runs Saved, and similar advanced stats alone.

David Wright leads the National League in Wins Above Replacement, according to FanGraphs, while Carlos Gomez is the WAR leader per Baseball-Reference. The three top starters in the league — Clayton Kershaw, Matt Harvey, and Adam Wainwright — also make strong cases. NL MVP voters, consider yourselves lucky you don’t have to vote now. (And that you incorrectly value team performance when voting on the contributions of individual players, thus narrowing your choices.)

No player better combines high expectations, a huge salary, and complete failure this year than Upton. The Braves gave Upton the biggest contract in team history, handing him a five-year, $75.25 million deal that right now looks like a total disaster. Upton’s hitting .177/.266/.300, and all the worst features he showed as a Ray — including bouts of terrible pitch recognition — have come home to roost in Atlanta. He is striking out a career-high 32.1 percent of the time, with the highest swinging-strike rate and lowest in-zone contact rate of his career. He’s also hitting for less power than in any other full season of his career. Adding injury to insult, he just went on the disabled list with an adductor muscle strain. The Braves have played at just three games over .500 after a blistering 15-5 start, and Upton’s sub–replacement level performance is the biggest reason why.

Wainwright, Harvey, and Kershaw have been a cut above anyone else in the league, bunched so close together that it’s a near–coin flip picking between them. We’re going with Wainwright, for posting one of the lowest walk rates for any starting pitcher in half a century, for leading the league in innings pitched (by just 1⅓ innings over Kershaw, granted), and for suppressing runs nearly as well as Kershaw and Harvey have, despite a batting average on balls in play 41 points higher than Harvey’s and 67 points higher than Kershaw’s. The second-half race between the three could be fascinating, though any kind of innings cap for Harvey would likely knock him out of the race, assuming Wainwright and Kershaw keep rolling over everyone in their path.

Rookie of the Year: Shelby Miller

OK, put down the pitchforks. Yasiel Puig is the people’s choice, and we’ll get to him in a second. Unlike Puig, Miller has been here since the start of the season, putting up big numbers. He put up gigantic numbers over his first 14 starts for the Cardinals, striking out 96 batters, walking just 19, and allowing just six homers in 86⅓ innings pitched, good for a 2.08 ERA. A five-run, 1⅔-inning implosion against Oakland on June 28 hurt, but his numbers are still outstanding: 2.92 ERA, 3.08 FIP, and a strikeout-to-walk rate just short of 4-to-1. Even without crediting Miller for being the no. 2 starter on the best team in baseball, his résumé is enough to nudge him just above Puig … for now.

Of course Puig has put up incredible numbers in just 38 games, hitting .391/.422/.616. His .472 BABIP will come crashing down soon enough, and Puig striking out more than five times as often as he’s walked suggests that he can be figured out — and has, more often, over the past week or two. There is also the matter of a hip injury that had him hobbling going into the break. Still, we’re talking about a spectacular talent who’s already produced plenty of value even in that small 38-game sample. Between Miller and Puig, along with dynamic rookie starters Jose Fernandez (on an innings cap, but fantastic results so far) and Hyun-Jin Ryu, this is shaping up as a terrific race.

Really the story of the first half, the Pirates are threatening to wash away not only a 20-year streak without a winning season, but also a streak of the same length since their last playoff berth. It has taken a confluence of factors to push the Buccos to this point: the emergence of Starling Marte and Pedro Alvarez; the shrewd pickups of Mark Melancon and Russell Martin; the rise of Gerrit Cole; Jason Grilli, who shoved grilled cheese sandwiches stuffed with pain down opponents’ throats before tiring just before the break; and the shockingly effective performances of Francisco Liriano and Jeff Locke. Ninety-plus wins and a playoff berth are hardly a sure thing. The Pirates have teased us with fast starts before (albeit none this strong in the past two decades) only to collapse in the second half. They’ve won three more games than their runs scored and runs allowed totals would suggest. And more broadly, there’s a very real question on whether or not they’re really this good, especially with Liriano defying the command and injury demons that have plagued his career and Locke not showing anywhere near the peripherals to suggest he’ll keep up anything close to his current 2.15 ERA.

The good news is that the Pirates’ 56 wins are already banked, so even with some regression, they could play .500ish ball the rest of the way and still give themselves a good chance of crashing the postseason dance — especially with talented, underachieving teams like the Nationals and Dodgers having so much ground to make up to catch Pittsburgh. Still, let’s hope the Bucs get someone more exciting than Wandy Rodriguez and Derrek Lee at the deadline to help alleviate the effects of some inevitable pullbacks.

Also considered: Cardinals (they figured to be good, just not this good)

The tricky part here is that the Nats haven’t been overwhelmed with injuries the way some underachieving teams have. Sure, losing a player as good as Bryce Harper for even 10 minutes hurts. But for the most part, they’ve played with something close to the roster we expected on Opening Day. It’s just that those 25 players have collectively been pretty damn ordinary. The Nats rank 25th in park-adjusted offense, hitting just .241/.301/.385 as a team. Several players who were expected to produce simply have not. Denard Span, who looked like a savvy acquisition from the Twins over the winter, is hitting just .260/.317/.355. Ryan Zimmerman’s .270/.351/.453 effort is his worst since an injury-plagued 2008. Adam LaRoche looked like a classic case of a winning team paying too much to retain an over-30 veteran coming off an unsustainable late-career spike … and that’s exactly what has happened, with LaRoche hitting just .249/.331/.425 after a .271/.343/.510 mark last year. Danny Espinosa saw his performance dive into the tank. Fill-in players like Roger Bernadina, Tyler Moore, and Steve Lombardozzi have been awful, and seen way too much playing time. Kurt Suzuki was a replacement-level substitute for Wilson Ramos while Ramos rehabbed from injury. And Jayson Werth, while still a nice source for on-base percentage, has predictably seen his game erode as he’s moved into his mid-30s, with his $126 million contract looking as ludicrous now as it was the day the Nats gave it to him.

That’s what makes charting a second-half course so challenging. Should the Nats stand pat with the roster they (and many pundits) figured would be good enough to repeat as NL East champs? Or do they bench some struggling regulars, even if it means sticking millions of dollars, as well as those high expectations, on the pine? The bet here is that the Nats don’t do anything too rash, and start to rack up wins after the break. But they’ve got to climb out of a deep hole to give themselves a shot at the playoffs.

Contender Most Likely to Fall Off in the Second Half: Pirates

… for all the reasons laid out above. For the Pirates’ sake, hopefully GM Neal Huntington can land a difference-maker or two (Alex Rios? Nate Schierholtz? Jake Peavy?), or have the Nats, Dodgers, and other potential rivals for a playoff spot continue to muddle along near .500.

Expect the Diamondbacks to be aggressive as they try to hold off L.A., San Francisco, and the rest, too, especially with so many players (Jason Kubel, Martin Prado, Ian Kennedy, everyone who has tried to close) struggling so badly.

As you can tell, I’m not sold on the Dodgers (as well as the Nats and Giants) being nearly as bad as they’ve shown in the first half. In L.A.’s case, more Puig and Hanley Ramirez bodes well for an offense that has been completely punchless at times. The rotation got a boost from the addition of Ricky Nolasco and now looks as healthy and capable as it’s been all season. Brandon League is pitching in far fewer high-leverage spots after repeated meltdowns earlier in the year. Carl Crawford is back and Matt Kemp hopefully should be in the next few days. The NL West has been baseball’s weakest division, and thus its most winnable, even for a team that stunk for weeks. Even after all that has happened, it’s not hard to imagine the Dodgers playing in October, as most people expected before Opening Day.