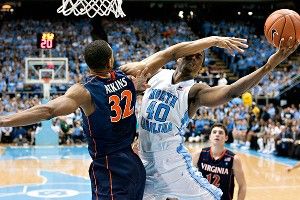 There was Duke’s stunning comeback at North Carolina and — on the very same night — Florida State’s improbable loss at Boston College. The two results may have changed the complexion of the conference race, but they only added to the increasingly exuberant ACC script. With Michigan State’s ugly win over Ohio State on Saturday, the suspicion is proved; the Big Ten might be the best conference in the country, but the ACC is the most exciting.

In hindsight, there were signs that the rebirth was coming last March, when three ACC teams made the Sweet 16 for the first time in six years. Florida State was the first school not named Duke or North Carolina to accomplish that feat since 2006. But the Noles fell to Shaka Smart and VCU, and Duke and Carolina were gone before the Final Four, casting doubt on the legitimacy of the ACC’s depth.

For a conference so top-heavy over the last decade, this year’s resurgence is a shock. But five key factors have put the ACC back on the precipice of dominance and made it the most fascinating, anxiety provoking, and entertaining conference in the nation.

1. The Permanent Duopoly: Duke and UNC
The ACC boasts two teams that almost always finish among the top 15 in the country. Since 2004, Duke has missed that designation just once (2007, when it finished no. 21 in the AP poll), and UNC just twice (2004, when it was no. 18, and 2010, the infamous NIT season). The Tobacco Road kings sustained the ACC while it floundered, and now they make it more compelling as the situation improves. The blue tide raises all ships.

2. The Long-Awaited Third Contender
Earlier this season, I speculated that Virginia might be the next powerhouse in the ACC, implicitly dismissing Florida State in the process. I was thrown off by the Seminoles’ 8-5 start, but I should have realized a defensive-minded squad with an unwavering coach will usually improve as the season progresses. Starting January 10, the Seminoles went on the most impressive win streak of any team this season. After beating a deceptively strong Virginia Tech team on the road, the Noles demolished Carolina 90-57 at home, ended Duke’s 45-game home winning streak with a Michael Snaer buzzer-beater, and earned a grueling 58-55 win over no. 18 Virginia.

The seven-game run ended (puzzlingly) at Boston College, but the bona fides are in place. Florida State coach Leonard Hamilton has excelled in Tallahassee long enough to earn the stamp of legitimacy, and this year’s Noles are so big and so physical at every position that they’ll be one of the scariest teams to face in March. Barring a horrendous draw, I’ve got them penciled in for at least the Elite Eight.

3. The Team That Knows Itself
Tony Bennett is only in his third season at the helm of Virginia, but he’s already outpaced the other new coaches in the league (eight of 12 ACC coaches have been in the conference for three years or less). Using a variant of his father’s system, the younger Bennett runs the fifth-slowest offense in America. Combined with the country’s seventh-best defense, and led by potential ACC Player of the Year Mike Scott, the strategy has paid off. Virginia is now ranked 19th in the country, and four of its five losses came by three points or less.

Bennett’s tactics have vaulted him ahead of his peers in the ACC and helped secure its status as an elite conference with real depth. Having four teams in the Top 25 may seem a minor feat, but since 2006, the ACC has boasted that success at the end of a season just once. It matters.

But what about the tournament? The odd reality in Charlottesville is that the slow style will make Virginia a trendy early upset pick in the first round; it is almost guaranteed to play one of the closest games on the opening Thursday or Friday, no matter the opponent. But if the Cavaliers survive and make it to the second weekend, the discipline and strength of the defense will make them a terrifying prospect for a 1- or 2-seed unused to the smothering approach.

4. The Best of the Aspiring Horde
The first, most noticeable side effect of all the new coaches was that many teams were forced to endure two years of poverty. But with so much ambition in the coaching ranks, and the growing pains starting to fade, there are bound to be one or two teams every year that vie for the final tournament spots. Growth, rather than stagnation, is the working theme of the ACC’s bottom half. This year’s aspirants, NC State and Miami, are both in the unique situation of having first-year coaches who inherited real talent.

In Raleigh, Mark Gottfried took over for the vilified Sidney Lowe, who could recruit but plainly couldn’t motivate or coach. With five starters who average 10 points per game, Gottfried is the envy of first-year coaches everywhere. To his credit, he’s made the most of his situation, compiling a 7-3 ACC record. Unfortunately, the schedule is about to get murderous. With Duke, Florida State, and North Carolina back-to-back-to-back, the bloom on Gottfried’s rose might be ready to fade. One upset, though, and State will have a hell of a signature win in its belt come March.

When Frank Haith bolted for Missouri, he left Miami with a talented roster full of upperclassmen. The team finally began to show its potential with a double-overtime win against Maryland and, more importantly, an overtime win at Duke on Super Bowl Sunday. Even this weekend’s five-point loss at Florida State proved the Hurricanes can compete with the elites of the conference. Kenny Kadji and Reggie Johnson (slowly returning to game shape after missing nine games due to injury) might be the best big-man combo in the ACC outside of Carolina’s duo of Tyler Zeller and John Henson. They’ll have a chance to prove that the Duke win was no fluke this Wednesday when they get the Tar Heels at home. It should be one of the best frontcourt battles of the year.

5. Drama
Virginia alone has played six conference games that were decided by four points or fewer. The year’s two signature buzzer-beaters both belong to the ACC (Austin Rivers against North Carolina and Snaer against Duke), and both ended long home winning streaks — a perfect metaphor for the conference’s growing parity. Florida State also owns the weirdest win of the year, the 33-point massacre against North Carolina when Roy Williams took his starters off the floor early, leaving the walk-ons to finish the game and face the stampede of fans.

Finally, there’s the battle for the championship. Wednesday’s results led to Saturday, when the trio faced difficult home tests. Carolina kicked it off by showing an incredible amount of resilience in dealing Virginia its worst ACC loss of the season. Zeller, who had been heartbroken by the Duke loss, came back and scored 25 points to find his own brand of redemption. Duke took Maryland’s best shot in the first half, but subdued their secondary rivals late to win going away. And in the battle for Florida, the Seminoles held on to clip Miami by five.

Now, at 8-2, none of the three contenders can afford an off night. Every game will be a pressure cooker, and for the first time in years, there’s no comfort or quarter to be had in the conference schedule.

In the ACC, that’s the definition of a renaissance.