Is Arsenal's Olivier Giroud Getting Better or Getting Luckier? 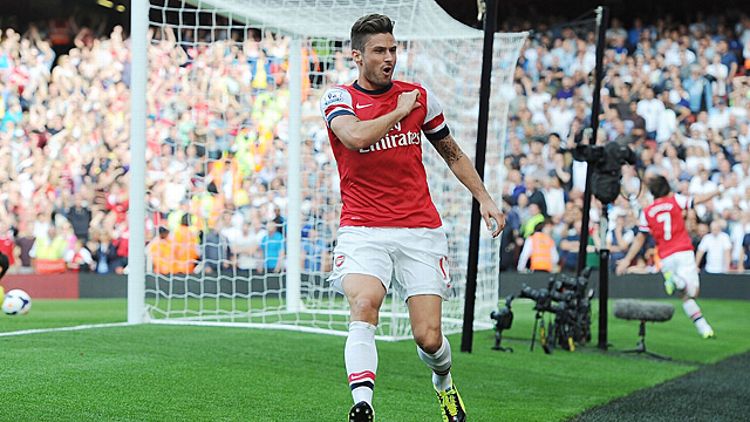 It’s been a pretty good month for Olivier Giroud. The Arsenal striker’s main identity when the season kicked off in mid-August was as the guy who Arsenal supporters really wish had been replaced by Gonzalo Higuain. Now, three games later, Giroud is tied for the Premier League lead with three goals, starting for the French national team, and, just in case life wasn’t good enough already, about to start receiving passes from playmaking wizard Mesut Ozil when the Premier League returns from the interminable international break this weekend. The question is, can the good times last?

Giroud’s hot start boils down to three specific moments. Three times the striker got close to the opposing goal, got the ball on his left foot, and buried it in the back of the net. Now, scoring for three games in a row isn’t all that interesting (Daniel Sturridge is also currently on a three-game streak), and if it happened during the middle of the season it would probably be relegated to a footnote in a game summary. But, with the transfer window closed, and Giroud’s star also rising for his admittedly struggling national team, his nascent renaissance is one of the more interesting emerging narratives in the Premier League.

Giroud’s start stands in stark contrast to how truly below par he was last year, especially in front of goal. In 34 games last season, Giroud managed to score with his feet only five times from open play despite taking 66 shots (as always, credit to ESPN Stats & Info for the numbers). During the 2012-13 season, 33 players took more than 50 shots with their feet, and 26 of them managed to convert at a higher rate than Giroud’s 7.6 percent. That’s especially stunning when you add in that his average shot attempt came from only 17.3 yards away, which is closer than any player except Robin van Persie and Romelu Lukaku.

Usually when a striker has a poor run of form, the main culprits tend to be shot type and shot selection. Dig into the numbers and you’ll see that the striker who mysteriously stopped scoring also ended up taking a lot more headers, or was pelting a lot of pot shots from distance or tough angles. But Giroud was actually more accurate with his head than his feet. He scored four times with his head out of a league-high 34 attempts, or 11.8 percent of the time. Although that’s not an elite number (it ranked him a decidedly average seventh out of the 15 players who took more than 20 headers), it’s still better than his conversion rate with his feet. Compare that with Christian Benteke, who tied Giroud for the most headed attempts in the league last year and also scored four goals. Benteke scored 12 goals on only 61 shots from open play with his feet, leading the league with a 19.7 percent conversion rate. The Aston Villa striker’s dominance on the ground was somewhat masked by the amount of headers he took, while Giroud’s average conversion rate on headers hid how truly awful he was in front of goal.

This is where we put the obligatory note about sample size. Three games at the beginning of this season aren’t enough to say anything definitive about Giroud by themselves; but the 34 games he played last year aren’t enough either. It’s not only that the number of shots a player takes in a season is relatively low, it’s that they are so varied. When you look at headers, shots, shots from distance, and shots from dead-ball situations, you’re combining several completely different and tiny data sets to come up with a total that’s still too small to draw conclusions from. Add the idea that goals are so rare and what you have is an end result, even over a full season, that is highly influenced by luck.

The easiest thing to do when you have too little data is go get more. Instead of just looking at last season, let’s include Giroud’s two years in France’s Ligue 1, the nine official games he’s played for France since last summer (six in World Cup qualifying matches and three at Euro 2012), and also all the Champions League games he’s played in. The picture doesn’t get much rosier for Arsenal fans. With his feet from open play, Giroud converted at an 11.0 percent clip, knocking in 26 out of 237, and averaged shots from 17.8 yards away. That’s not stellar by any means (and unfortunately for Giroud, the man he was brought into replace, van Persie, converted on 20 percent of his EPL and international shots, a number most mortals won’t ever live up to), but it’s a notch above where Giroud was last season. Although conversely, his heading was somewhat better last year than his career clip of 10.7 percent (12/112).

The scary thing for Arsenal fans is that the Giroud outlier season might have been his 2011-12 campaign with Ligue 1 side Montpellier. This was presumably the year that convinced Arsene Wenger he was the right man to lead Arsenal’s line. Giroud scored 19 non-penalty goals from 156 shots overall, but they broke down quite differently from the rest of his career. He scored only one goal from his 38 headed attempts, and netted a whopping 14 from the run of play with his feet on 98 shots. That’s a conversion rate of 14.3 percent, far outside anything the rest of his career has shown.

It seems pretty clear that Olivier Giroud is what he is. The problem is that’s not what Wenger thought he was getting. The 2011-12 season might have convinced Wenger that Giroud was a physical presence in the middle who augmented that skill with a versatile goal-scoring game, somebody like Manchester City’s Edin Dzeko on his best day. But not even Dzeko generally approaches Dzeko on his best day, and Giroud certainly doesn’t. Rather, Giroud is a positionally sound forward with an erratic scoring record. He gets into good positions in front of the net, and squanders them more often than he should. He struggles with what should be the easiest part of the game — finishing with his feet — more than almost any striker you will find on a team competing for a Champions League position, but he counterbalances that by being an above-average header of the ball, and working to get a lot of opportunities to take those headers. For better or worse, Arsenal are stuck with him for the foreseeable future because there aren’t any other healthy options available (excluding Theo Walcott, who is incredibly valuable to them on the wing).

The scary thing for Arsenal fans is that Giroud is the canvas that Ozil will be painting his brilliant pictures on. Ozil is unquestionably a passing wizard, and the combination of his movement and ability with Giroud’s knack for getting in front of net should get the French striker more chances than he knows what to do with. Literally.